The Red Sox just ended the eight-game winning streak against the Rays and now have to take on the red-hot (for them) Royals who are the winners of a whopping two in a row. The Red Sox can score with the best of them and they can pitch with the best of them. It’s no wonder they’re sitting with the best record in baseball as the first month comes to a close. The good news for the Royals is that Mookie Betts is currently day-to-day with some hamstring issues, so if he sits at all, that’s helpful. Even without him, though, they have plenty of fire power. They’re incredibly lefty heavy in the rotation, so expect to see the Royals rely on their righties in the lineup this series to get the job done. 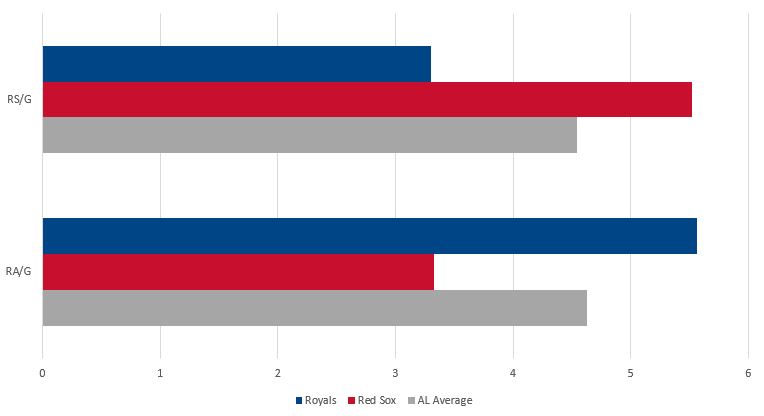 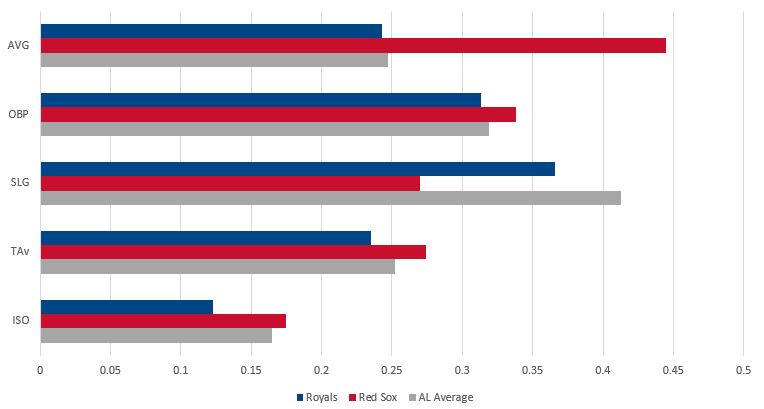 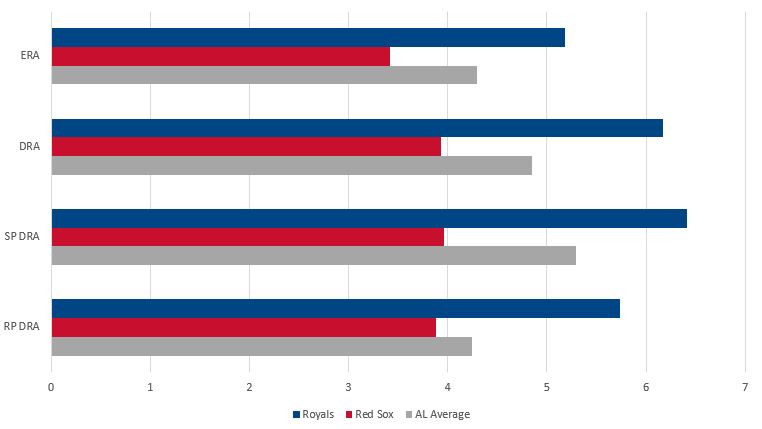 It sure seems like we’ve been waiting for quite awhile for Rodriguez to break out, which makes it easy to forget he’s only 25 years old. This season has been a mixed bag for him. The numbers are obviously very good, but he’s also only thrown 22.1 innings in four starts, so he isn’t giving a ton of innings. That isn’t a huge deal with the rest of the rotation and their bullpen, but it’s still something he can improve on. It’s also partially because of a bad first start against the Rays about three weeks ago, so maybe I should hold off on the criticism. Rodriguez has used his fastball a little less this season than his career numbers, and the velocity is down a bit too. He’s using his changeup and slider a lot and while the fastball has been fantastic with a .175 average allowed so far, the changeup has been great too, helping to limit extra base hits. He’s also been dynamite against lefties, though the sample is small. They’re 0 for 9 with eight strikeouts against him, so I’m not sure if it’s wise to expect much from Mike Moustakas, Jon Jay or Alex Gordon in this one and Lucas Duda probably shouldn’t even be given a shot to see what he can do.

Hammel has, overall, been really good this year, and a big reason is that he’s started getting way more ground balls, which should help him a little bit in this one. But even with that, he’s striking out less than five per nine and only has a 9 percent swinging strike rate, which is a recipe for disaster against a good lineup in a bandbox park like Fenway is. If you’re betting on Hammel having his first true blowup start of the year, I’d say this is the safe bet. And we can’t talk about Hammel without mentioning his third time through the order issues. This year there aren’t any, but if the Royals operate as if there won’t be, they’re playing with some serious fire. He hasn’t faced a lot of the Red Sox hitters much in his career, but Ramirez is hitting .474/.500/.684 in 20 career plate appearances.

I don’t want to jump to any conclusions, but I’m willing to declare that Sale is good. What is there to say about Sale that hasn’t been said? He gives innings, he strikes a ton of guys out, he doesn’t walk hitters and he doesn’t give up hits. The guy is 6’6” with a crazy difficult to pick up delivery and a great slider. This year, the fastball velocity is a little bit down, but you always wonder with him if that’s by design to try to keep himself fresher for the postseason. Even so, it’s still 93-94, and at that angle, it seems a lot faster. He has allowed three home runs on it and a .226 ISO, so maybe it’s starting to get a little more hittable as he gets older. He’s still struck out 27 batters with it in 62 at bats that ended on it, so let’s not get ahead of ourselves and say it’s anything but great. Unlike Rodriguez, lefties can make contact against him with a .250 average, though in just 17 plate appearances. He’s thrown more innings against the Royals than any other team (by 1/3 of an inning) and is 10-10 with a 2.99 ERA in 162.2 innings. The Royals have hit him at times, but this is a different team, so that might not necessarily tell us much.

Junis is coming off an absolute disaster against the White Sox when he allowed a franchise record tying five home runs. Home runs are kind of the story of his season in his five starts. In the three starts he hasn’t allowed one, he’s 3-0 with a 0.82 ERA. In the two starts he’s allowed them (eight total), he’s 0-2 with an 8.71 ERA. I imagine at some point he’ll pitch well in a start he allows a home run, but given the ballpark he’ll be in, that has to be a bit of a concern. This is his first career start against the Red Sox and their powerful lineup, but he has faced J.D. Martinez a few times and has held him to one single, so that’s something. The big concern for me with Junis in this one is if he doesn’t have his best slider, he’ll be in trouble because the Red Sox as a team actually do pretty well with sliders. If he’s on, it won’t matter because his stuff is that good, but he can’t be anything but nearly 100 percent on.

It sure seems like Pomeranz is hurt a lot, but he has made at least 30 starts in each of the last two seasons, so that’s a bit surprising to me anyway. He started the year on the disabled list this year and made his debut in Oakland about a week and a half ago. Both starts have been pretty rough and he was bit by the home run ball in his second start against the Rays. It’s interesting to me that he had a reverse split last year given that he has similar size to Sale, which should give trouble to lefty hitters. He also isn’t much of a bet to go deep in the game, so if the Royals hitters can at least foul some pitches off, they’ll be done with him and on to the bullpen fairly early. Last year, he only pitched even into the seventh inning 10 times and never got past it. All that said he pitched quite well last year against the Royals in the two starts he made against them, though he didn’t get a decision in either.

Duffy is kind of at a season crossroads here after another rough start, but at least he went six innings for just the second time on the season. The good news from the last two starts is that his walk issue seems to maybe be under control as he’s allowed just three free passes in his last 10.2 innings, but he’s just been too hittable lately and the Red Sox right-handed pop in a day game might be trouble for him. And in four starts at Fenway, he’s gone 0-3 with a 7.97 ERA including allowing three home runs in a game there in 2016. The only Red Sox hitter he has a lot of experience with is Martinez, who he’s held to a .136/.208/.318 line in 24 plate appearances, so at least that’s a good sign. And hey, he had his best game of the year against a solid offense in a hitter’s park in Toronto, so maybe he can repeat that in this one.

The Red Sox are currently the class of the American League (though I still think the Yankees end up on top) and the Royals are currently the dregs of the American League (though I still think the Tigers end up on bottom), so on paper this series is a big time mismatch. On the field, it probably will be too, but you never know, so they’ll still play the series. The way Soler is going right now, I think he might be able to carry the Royals to one victory, so as much as I want to say the Red Sox will sweep this, I think the Royals take one of three.

Tags: Chris Sale, Danny Duffy, Drew Pomeranz, Eduardo Rodriguez, Jakob Junis, Jason Hammel |
David Lesky
Follow @dblesky
I've been a Royals fan since the day I was born, and have had the opportunity to write about the Royals for nearly a decade now. The winning was better than the losing, but the losing is kind of familiar at least.
read more from David Lesky