The Tigers are multiple games under .500, multiple games out of first place and aren’t very good. And they’re still overachieving to start this season. They were expected to occupy the basement of the American League Central with the Royals and White Sox, and so far haven’t really been that bad, which does kind of make some sense. I had said before the season that they had the potential (though not likely) to have the best pitcher in the division and the best hitter in the division, so they could surprise by being less terrible than expected. Both Miguel Cabrera and Michael Fulmer have been great, but Matt Boyd and Francisco Liriano stabilizing the starting staff has been huge while Jeimer Candelario, Nicholas Castellanos and Leonys Martin have made the offense better than many expected. 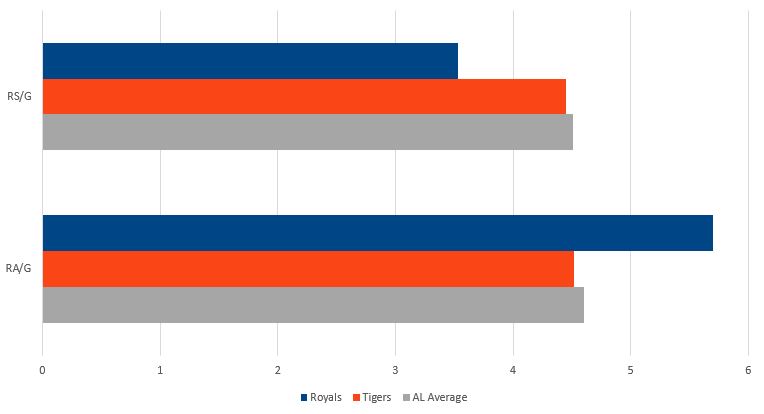 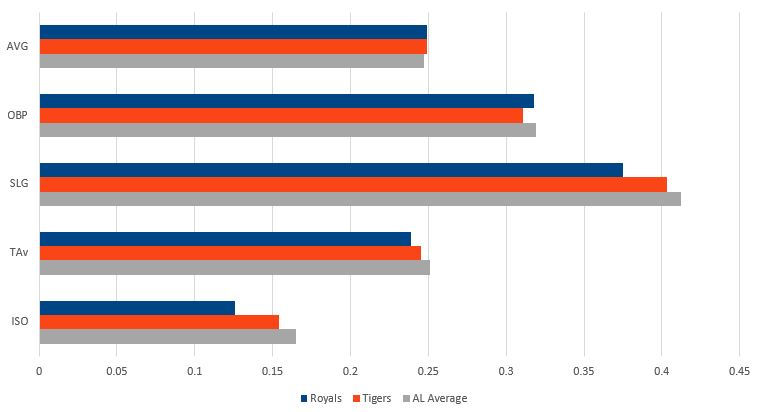 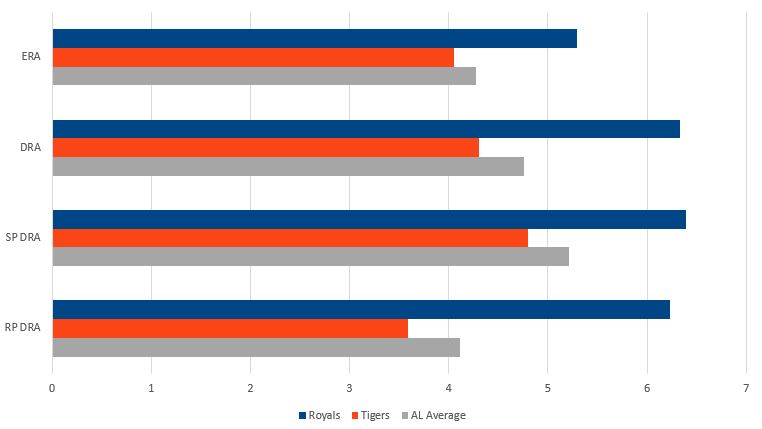 There once was a time when Fiers was a strikeout artist who seemed unhittable at times (and he does have a no-hitter to his credit). He used his high fastball to get a lot of fly balls back before balls were flying out of the yard at a record pace. He’s not that pitcher anymore. Okay, he still uses a high fastball, but he’s changed his game to coax more ground balls and a byproduct is the strikeouts have dropped significantly. It’s working for him so far, but I have to think there’ll be a correction soon if he keeps doing what he’s been doing. He’s allowing the highest percentage of barrels of the last four years and has an xSLG allowed of .508, which is nearly 50 points higher than what he’s allowed. He’s probably been a beneficiary of the cold weather around the country, so we might see a big-time regression from him soon. This year, the sample is obviously small, but he hasn’t made it past the sixth and has struggled mightily when facing a lineup the first time. He had a rough game against the Royals in Detroit the last time these two teams met, allowing four runs on 10 hits in just 5.1 innings and he didn’t record a strikeout. He got the win, but the Royals have seen him and hit him, which bodes well.

Skoglund is coming off what I actually think is the best start of his career. Yes, I believe it was even better than his debut against Detroit last season. He faced a White Sox team that had bludgeoned the Royals and gave up just a run on two hits over seven innings while striking out nine. He’s been steadily improving with each start, and if he improves on his last one, we might be looking at a no-hitter. Now, I still don’t believe he’s especially good, but the fact that he’s done it at least gives me some hope that he can do it again. His start prior to his last one was what is now his third best start of his career against this very Tigers team. He gave up four runs in five innings, so it wasn’t exactly one for the highlight reel, but maybe he can build on that. The Tigers offense has hit for next to no power against lefties this season, so Skoglund should work to take advantage of that.

Liriano has done a great job this year of limiting hits, which has helped him to overcome a very low strikeout rate and a too high walk rate. The problem is that, like Fiers, it doesn’t seem especially likely to continue given the fact that he’s giving up some quality contact. He’s allowed a .196 average and .353 slugging percentage, but his xBA of .278 and xSLG of .547 says that isn’t likely to last. He doesn’t throw a lot of first pitch strikes, doesn’t get a ton of swings and misses and is somehow still holding hitters down even when he’s behind in the count. Opponents are hitting just .212 with a .273 SLG when they’re ahead in the count, which doesn’t make much sense given his pitching profile. He’s allowed a .071 average with zero extra base hits with runners in scoring position, a situation he’s only been in for 16 plate appearances all year. It’s a nice story how well he’s pitched to date, but it isn’t likely to continue. He’s faced the Royals twice this year and has allowed four runs on six hits in 12 innings.

Kennedy came back from two subpar starts and a line drive off his foot to pitch well against the White Sox on Sunday, giving up two runs on five hits over five innings. He threw a lot of pitches, though, and labored through his final two innings, so that’s something to keep an eye on in this game. The concern for Kennedy as the weather warms up and hitters are a little more in sync is the fact that he hasn’t gotten many swings and misses this season with a rate of just eight percent. He was at nine percent last year and 10 percent the year before. It seems like it’s not that different, but it really is, especially with the kind of contact he’s allowed this year (average exit velocity of 90.5 MPH and 14.1 percent of batted balls barreled). Kennedy hasn’t faced the Tigers yet this year, but has gone 3-2 with a 3.15 ERA in 34.1 innings against them as a member of the Royals. Watch out for Miggy in this one. He’s a career .316/.435/.684 hitter against Kennedy in 23 plate appearances.

At one point during the 2016 season, it looked like Zimmermann $110 million contract might be a bargain. That point has passed. After posting a 0.55 ERA in his first month with the Tigers, he’s gone 13-20 with a 6.26 ERA in 258.2 innings. He does have a pretty good strikeout to walk ratio of 2.5 in that time because even with all his struggles, his control has been okay. So that’s a nice thing to say. This year, he’s been absolutely mauled by righties with a .308 average allowed and .577 SLG, which could make for a nice day for Jorge Soler, Salvador Perez and Whit Merrifield. He’s also been a completely different pitcher on the road than at home, with a  10.13 ERA in three starts covering just eight innings on the road compared to a 3.93 ERA in three starts covering 18.1 innings at home. This game is being played on the road for him, in case you’d forgotten. Even with his struggles, the Royals haven’t taken advantage, as he’s gone 2-0 with a 1.50 ERA in 30 innings against Kansas City since joining the Tigers.

Hammel got hit and hit hard by Boston in his last outing. After starting the year allowing just one home run in 32 innings, he gave up two big ones, including a grand slam to the Red Sox and was unable to protect an early lead he was given. That doesn’t change the fact that he has put together a very nice bounceback season outside of his last start, but given how rough he had it last year, you have to wonder if he’ll regress to last season Hammel or keep up what he’d been doing. I said this before his start in Boston and I’ll say it again. His lack of strikeouts is concerning this year and is the reason why a team that has power concerns me against him. The Tigers have enough power to be dangerous, but he’s done okay enough against them with one rough start (that was plagued by a third time through the order barrage) and a fantastic nine inning start that the Royals somehow still didn’t win. Hopefully it’s more of the latter in this one.

I liked Boyd to break out last year after a solid finish to his 2016 season, but he struggled and even spent some time in AAA to work out his issues. He dominated in Toledo and has had a nice start to his big league season, though his DRA indicates his strong start, like Liriano and Fiers before him, is not to be trusted. I have to say that I’m not really sure what’s not to like other than a low strikeout rate, which isn’t nothing, but he’s done a nice job of getting weak contact and looks the part of a solid big league starter. He’s been dominant against lefties, holding them to a ridiculous .095/.174/.095 line, albeit in just 23 plate appearances, but that’s not great news for Mike Moustakas or Lucas Duda. Boyd has had an interesting career against the Royals. He made his first start with the Tigers against them and was absolutely fantastic. Since then, things haven’t gone quite so well. In total, he’s made 10 starts against the Royals and has gone 2-5 with a 7.05 ERA. In 44.2 innings, he’s given up 64 hits. Moustakas and Perez have homers against him and Whit Merrifield has a .385/.467/.692 line in 15 plate appearances.

Junis didn’t have his best stuff his last time out, but was just the second visiting pitcher all season to throw a quality start at Fenway Park. That’s not nothing. And even without his best stuff, he gave up just two runs on seven hits while striking out five and walking one over six innings. He’s certainly been better this year, but he was plenty good and now he gets to face a Tigers team that he’s thrown 15 innings against this year and allowed just two runs on seven hits with 10 strikeouts and two walks. His weapon this year has been the sinker, allowing just a .231 average with it and a .385 slugging percentage. If he can have that working, along with his devastating slider, the Tigers will struggle against him again. Hitters have chased 31.5 percent of the time against him, and if he keeps that up, he’ll be just fine against a pretty hit or miss Tigers offense.

The Tigers record is much shinier, but I don’t think they’re any better than the Royals at this point in the season. Maybe that’s silly, but I really don’t. And just as the first six games of the season series have been split, so too will this series, I believe.

Tags: Eric Skoglund, Francisco Liriano, Ian Kennedy, Jakob Junis, Jason Hammel, Jordan Zimmermann, Matt Boyd, Mike Fiers |
David Lesky
Follow @dblesky
I've been a Royals fan since the day I was born, and have had the opportunity to write about the Royals for nearly a decade now. The winning was better than the losing, but the losing is kind of familiar at least.
read more from David Lesky