Anyone remember when Alex Gordon was good? That’s right, it’s today. It’s right now. It’s happening. Heading into action Wednesday, Gordon was hitting .321/.361/.474 with a .293 TAv. This is the best year of his career since 2015 when he hit .271/.377/.432 with a .299 TAv and not too far off from his 2011 breakout. There has been plenty of conversation about whether this is sustainable and what he’s done to get to this point. The mechanics are better explained by people other than me, but I will say that his swing looks considerably more relaxed than in the past.

What I want to get into is actually something really interesting because Gordon had only walked twice through Tuesday’s game. For a player known best offensively for his plate discipline, I found that interesting. He’s also been hit three times, which is no surprise, and that’s why he’s ended up with a 40 point spread between his average and OBP. The question is if the lack of walks is a cause for concern or something you don’t worry about because he’s hitting so well. My first thought was that it’s not a big deal because when guys are seeing the ball so well, they don’t miss their pitch so the count doesn’t get quite as deep, but then I realized we can actually see what’s happening.

And it’s pretty simple. Pitchers aren’t working around Gordon. That makes sense considering he’s hit .214/.302/.346 over the last two seasons in more than 1,000 plate appearances. Why wouldn’t you challenge a guy who hardly ever hit the ball hard or far? This season, Gordon is seeing a higher percentage of pitches inside the strike zone than ever before at 52.5 percent. Let’s just take a look at the zone percentage he’s seen by year since his breakout in 2011:

That’s a pretty big jump. If you’re a visual person, here’s this fun chart from the incomparable Brooks Baseball: 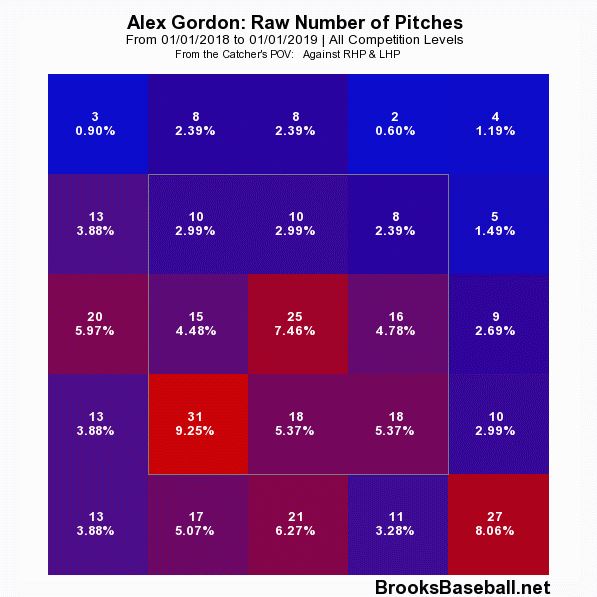 And when you couple it with the fact that he’s chasing fewer pitches than in any season since 2010, it means he’s likely really zeroing in on the pitches that he can hit. Here’s his chase rate since 2011:

And if you like to see visuals on that, we’ve got you covered: 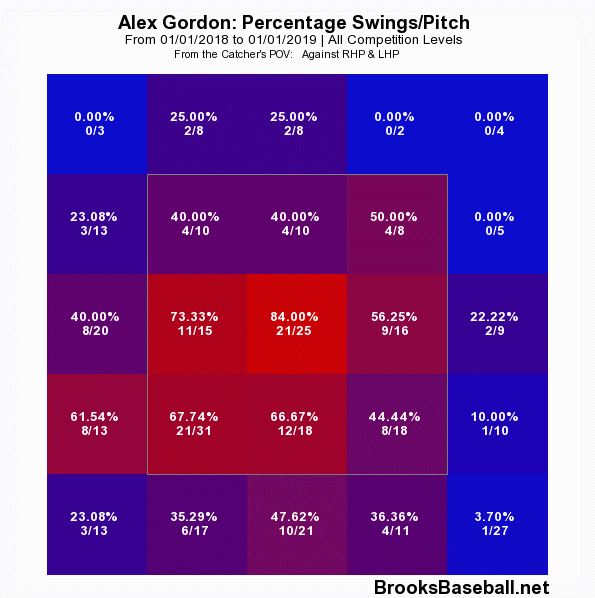 So you can see that he’s not getting pitched around basically at all, and when he is, he’s leaving the bat on his shoulder. He’s even swinging and missing at the lowest rate of his career. I’ll spare you the chart or the graphic, but he’s below 20 percent on swinging strike rate for the first time in his career.

What that’s led to is the lowest soft contact rate since 2012 and the highest hard contact rate of his career. He’s not setting the world on fire as far as his hard-hit percentage, which sits at just 40 percent and ranks 143rd in baseball (out of 366), but his average exit velocity of 90.4 MPH corroborates the idea that he’s making less weak contact this season.

Where’s the difference? According to the Statcast numbers, he’s figured out how to hit fastballs again, which has led him to success against offspeed stuff. Here are his fastball numbers (along with expected numbers):

So you can see that he probably had some bad luck last year and has had some good luck this year, but there are improvements across the board in all categories, regardless of if he’s overperforming or not.

Now here are the numbers against offspeed stuff:

So even if he does regress on the fastball, he has a chance to make up for it by doing even more damage against off-speed pitches. He’s still struggling against breaking pitches, so we can ignore that for now, but it will be interesting to see if he starts to see more of them moving forward.

The other thing that will be very interesting to follow is if he keeps this up, I expect he’ll get pitched out of the zone more than he has to this point. Gordon has always been a patient hitter as you can see above, but it’s easy to be patient when you know a meatball is headed your way. If he can maintain his current chase rate, I don’t think the “new” Gordon is going anywhere. Just look at those exit velocities on pitches in the strike zone. 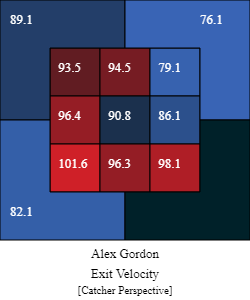 My guess is what he’s doing now isn’t sustainable because it’s not sustainable for many hitters, especially those who have been well below replacement level for two full seasons. But I do think that he’s found something that has him back on fastballs and back driving pitches he can actually drive. If he keeps that up, there’s no reason to believe that he can’t be a productive hitter and give the Royals some value on the back half of his deal.

Tags: Alex Gordon, Kansas City, resurgence, Royals |
David Lesky
Follow @dblesky
I've been a Royals fan since the day I was born, and have had the opportunity to write about the Royals for nearly a decade now. The winning was better than the losing, but the losing is kind of familiar at least.
read more from David Lesky