Maybe the Royals offense is bad. It’s not hard to assume that, given what you’ve seen so far in 2018.

But what if it could be true?

If you’ve made it to this site, you (I hope) have a pretty good understanding of semi-advanced analytics, which means you don’t need my awkward attempts at sounding like I know what I’m doing. So let’s dive in with some super-fun stats that may offer you a glimmer of hope in this abysmal season.

(Note: I’m an equal-opportunity employer. I’ll use some stats from Baseball Prospectus, Baseball Savant and FanGraphs. Variety is the spice of life, after all.)

I could try (and fail) to give you the clinical definition of expected weighted On-Base Average, but the definition is like 250 words long and reads like a rogue SAT question. Call it quality and amount of contact plus walks and strikeouts, which is what I pulled from Baseball Savant.

What has this to do with the Royals? Well, at present the MLB average wOBA is .312 and the expected wOBA is .334, a -.022 difference. Well, guess who has the most players in baseball (minimum 50 plate appearances) with a wOBA/xwOBA difference larger than that -.022 difference?

It’s the Royals, stupid (and also the Blue Jays and Phillies, but you can do your own legwork on why they’re not very good at the moment).

Only Jorge Soler (.416 wOBA/.382 xWOBA) is outperforming expectations, but some of those underperforming are doing so quite spectacularly. Lucas Duda is -.060 (.314/.374). For all the good Mike Moustakas has done, his differential is -.049 (.362/.411). Alcides Escobar, Cheslor Cuthbert and Drew Butera are all underperforming by more than 40 points.

Will the difference be substantial, should these guys start tracking closer to the mean? Dear reader, they will not. Even if Butera, Cuthbert and Escobar get closer to the -.022 mark, they’ll still be below league-average in wOBA. So will Abraham Almonte. Only Moustakas and Soler have an xwOBA at .380 or above; while not out of the ordinary, no other teams are fielding so many Quad-A players on the regular.

You will not be stunned to learn that the Royals are one of 15 teams across baseball who do not employ a player who have hit at least half their batted balls 95 mph or harder (min. 50 batted ball events).

You’ll similarly be unsurprised to learn that the Royals are one of seven teams with three or more batters hitting less than 30 percent of their balls 95 mph or harder.

Of those seven, the Royals are one of four—the Rays, the Astros and the Twins—with fitting into both slivers of this particular Venn diagram. The Royals are hitting softly almost across the board. Jon Jay is a starter for this outfit and has made solid contact on less than one percent of the pitches he’s seen.

(Silver lining: Overall, FanGraphs has the Royals hard-hit ball rate pegged at 36.5 percent, which is a very solid ninth in the league. The downside there is that 20.7 percent line drive rate is but 17th.)

You probably knew all this. But this is one of those nice stats that confirms what we already believe.

You look at the top of the leaderboard for lowest swing rate on balls outside the zone, you find the usual suspects—Joe Mauer, Joey Votto, Mike Trout, Alex Blandino (hey, you fish for tuna, sometimes you catch an old boot). There are no Royals on the top-30 of this list, although there are plenty of old faces—Jarrod Dyson, Lorenzo Cain, Ben Zobrist—and a few more quality Alex Gordon at-bats may put him up there.

What was more surprising is that both Salvador Perez (47.3 percent) and Mike Moustakas (39.0 percent) were bottom-30 chasers. Both are well-known for their aggression at the plate. Both have done a good job this season as the linchpins in a lineup lacking consistency. Both could stand to quit chasing outside the zone so often.

This represents a larger problem within the Royals ethos: they don’t walk. I don’t know if this is a philosophy problem or poor command of the strike zone, but at 7.7 percent, they walk less than all but the Red Sox (who hit) and the Tigers (who suck). The swinging strike percentage, while not as bad (10.2 percent) is still in the bottom-half of the league.

On the one hand, you check out someone like Moustakas and you can see an area for improvement—low and/or away is the spot to get him to chase, which you can see from below… 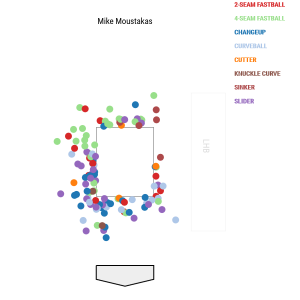 … while someone like Cheslor Cuthbert is more of an equal-opportunity chaser. 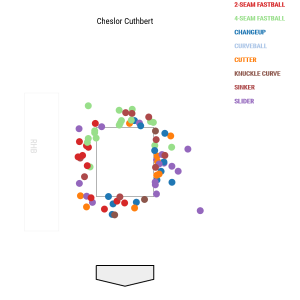 Sports can be frustrating. Sometimes you spend day after day following a team and they are more up and down than a depressed cocaine addict. I’d argue that the teams that lose 3-2 and win 10-3 drive fanbases crazier than whatever the Royals keep doing (i.e. losing all the time and being largely bad while doing so).

The good news: like as not, only Perez, Gordon and Soler are locks to be on the roster by next season. That’s beauty of a rebuild (which is what this is, regardless of how terrified the whole franchise seems to be of uttering those words, even when they’re barely winning a third of their games and the stadium is 40 percent full): whatever dumb things are dissatisfying to you currently, chances are pretty good some other worse, stupider thing will be the problem soon.

(I’ve been told my articles are not for those suffering from clinical depression. There’s probably something to that.)

Tags: Abraham Almonte, Alex Gordon, Cheslor Cuthbert, Kansas City, Mike Moustakas, Royals |
Colby Wilson
Follow @@CWilson225
I watch the box with the moving pictures and write about what I see. I tweet, mostly pictures of my dogs (aww), thoughts about being a new parent (awww!) and things I think about sports and beer and movies. That's @CWilson225 if you're interested.
read more from Colby Wilson