Stop me if you’ve heard this before. The New York Yankees are very good at baseball. Wait. Don’t stop me. This preview isn’t over. As you know, the Yankees had a bit of a surprise season last year, almost making the World Series, so they added to their already impressive team and may now be the best team in baseball. The offense is insanely good and that’s even with some below average production from more than a couple spots in the lineup. Now that they have Gleyber Torres up and Giancarlo Stanton is really hitting now (.350/.458/.825 in his last 48 PA), they might reach historic levels. The rotation is a strength, but they’ve had some struggles, so that’s potentially a cause for concern, but once their bullpen sorts itself out (which I assume it will with all that talent), they can overcome that. This is just a ridiculously complete team. 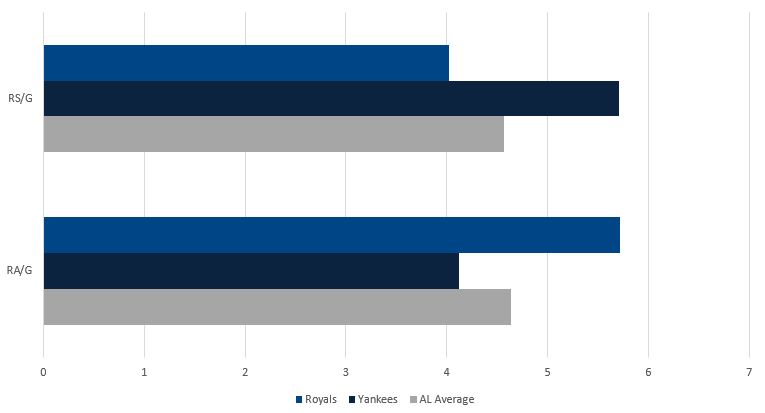 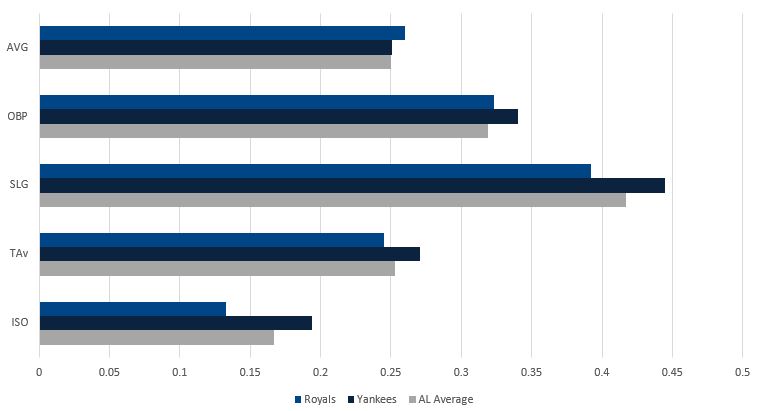 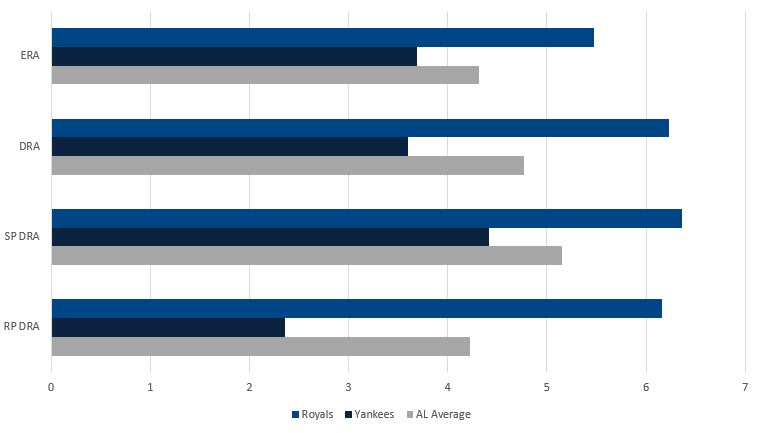 Sort of quietly, Sabathia has been pretty good the last two years, but this is the best he’s been in quite some time. He doesn’t strike hitters out like he used to, but the fact that he’s not walking hitters makes that more palatable. His strikeout to walk ratio is as high as it’s been since he won the Cy Young in 2007 and he’s been so difficult to hit, allowing just 32 this season. He hasn’t gotten especially deep in games this season, averaging just a touch over five innings per start and he’s coming off a bad start against Boston, but he’s having a really nice year. He’s doing it mostly with his cutter and slider and mixing in his sinker and a changeup to round things out. Even though the cutter has been one of his main pitches, it’s the one that’s been hit the hardest with a .265 average against it and a .469 slugging percentage. He’s also issued three of his five walks with it, so that’s the pitch Royals hitters should sit on. The Royals haven’t seen a lot of cutters this year, but they’ve hit pretty well against them, so maybe they can do some damage. Alex Gordon has the most career at bats against Sabathia, but has hit just .182/.270/.242 against him. Really nobody on the roster has had much success against him. Jorge Soler is 1 for 2, so there’s that.

It’s nice that the Royals get to start a series with their best pitcher, but Junis is coming off a rocky outing against Cleveland. He really wasn’t bad, which says a lot about the season he’s had, but he also hasn’t faced a lineup like this yet this season. Junis has strangely enough allowed most of his home runs in Kauffman Stadium with 9 of the 11 coming there. A lot of that came in one game, but it’s still an odd statistical anomaly of a still early season. While right-handed hitters have only hit .190 against him this season, they have a .240 ISO with a sort of odd line of one double, one triple and seven home runs. The Yankees righty power could give Junis troubles based on those trends. Watch out for the third time through. He’s allowed a .327/.390/.615 line and a veteran lineup like this could really prey on him.

Severino’s career path is fascinating. He had a tantalizing debut in 2015, giving 11 outstanding starts and was relegated to the bullpen in 2016 because he struggled so much. Then last year, he broke out with a fantastic season that he’s followed up this year by being even better. He’s even harder to hit, hasn’t allowed hardly any home runs and has gotten deep into games a lot of the time as well. He’s the total package. His fastball, which he throws nearly half the time averages 98.4 MPH. He also has a knockout slider and a really good changeup. Of his 70 strikeouts, 40 have come on the slider, which he’s allowing a .105 average with when he gets to two strikes. And here’s the genius of him as a pitcher. He throws a first pitch strike 70.5 percent of the time, but he also only allows a .188 average on the first pitch. Oh and when he’s ahead in the count, opponents are hitting .120/.128/.130. So if you’re following along, he’s nearly impossible to hit when he’s ahead in the count and throws a lot of first pitch strikes, but if you go after it, you’re likely to make an out. So what’s the solution? If I knew that, I wouldn’t be writing series previews.

And then there’s Duffy, who I have no idea what to do with. If we’re being honest, he could use about a month in AAA to at least try to work out whatever issues he’s having, but that can’t happen without a DL stint, so he’ll continue to work in the big leagues. Before his last start, there was a positive of him not walking hitters, but he gave up five in his last start on the way to allowing nine runs in 3.1 innings. Add in just six swinging strikes out of 87 pitches and there’s just nothing good to discuss. It sure looked like he took a step forward in the start before the last one, but he was also pitching with a 10-0 lead, so I really don’t know what to say about him. He was excellent against the Yankees last year, going 14 innings with a  1.29 ERA in two wins, so maybe something about facing the history of them will get him going. Maybe? I guess?

Gray is one of the Yankees starters who has struggled this season. He had a nice bounceback season in 2017 and was solid for the Yankees after they acquired him, but this year, he’s struggled with control and has been just incredibly hittable. Plus there’s the little fact of an inability to go deep in games, averaging fewer than five innings per start and not going more than six in any. While his curve is still his money pitch and it’s been quite good, he’s seen his fastball get absolutely rocked with a .317 average against and .585 slugging percentage. Maybe more damning about it, though, is that it’s been the pitch responsible for 11 walks in 52 plate appearances ending on it. That’s not good. I mentioned what hitters do against Severino when he’s ahead in the count, but on the flip side, when opponents have the advantage over Gray, they’re hitting .422/.623/.778. Even if you’re not an expert, it’s pretty easy to say that’s not good. Oh yeah, and he’s behind a lot, throwing a first pitch strike just 53 percent of the time. He has a 2.77 ERA in four starts against the Royals, but hasn’t faced them since 2016.

I mentioned Skoglund in Friday Notes, but he’s been varying levels of impressive over his last few starts. He had one of his better starts of his career in his last one, which is on the heels of a solid start in Baltimore and just a few starts removed from the best start of his career. The Yankees are hitting .255/.337/.473 against left-handed starters, so this is a real test for the young lefty, and I don’t think he’ll pass it, but if he can, that’ll be very impressive. As we’ve discussed quite a bit, the curve is an important pitch for Skoglund and has been great in his good starts. Yankees hitters haven’t seen a ton of curves from lefties, but some of their best hitters have struggled with it, so if that’s on, he at least stands a chance.

Boy, I really don’t want to sit here and predict a sweep, but it’s hard to see this going any other way. Of course, it’s baseball and weird things happen, but I’m going to say there’s a Yankees sweep and more sadness in Kansas City.

Tags: CC Sabathia, Danny Duffy, Eric Skoglund, Jakob Junis, Luis Severino, sonny gray |
David Lesky
Follow @dblesky
I've been a Royals fan since the day I was born, and have had the opportunity to write about the Royals for nearly a decade now. The winning was better than the losing, but the losing is kind of familiar at least.
read more from David Lesky