Think about the era baseball is currently enjoying.

The three true outcomes (walks, strikeouts, home runs) have never represented a larger portion of the game itself. Strikeouts are at an all-time high, walks have held steady above 8.0 percent since 2016 and while home runs are not at the 5.0 percent of non-pitcher at-bats from a year ago but still hovers just a hair below 4.5 percent (4.497 if you want to get technical)—altogether, the three true outcomes are accounting for more than 35 percent of all plate appearances this season across Major League Baseball.

So how is it, in this era, where everyone is either striking out, walking or hitting a homer, are Royals pitchers struggling to average 7.5 strikeouts per nine? The Kansas City Baseball Prospectus Affiliate Investigates!

I can spend 200 words railing on the pre-deadline deal that sent Matt Strahm (and Esteury Ruiz, for other reasons) to San Diego for three guys not with the Royals anymore, or I can point out that Strahm was striking out more than a batter per inning before getting hurt last year. I’ll just do that.

(Here’s where I point out he’s striking out less than five batters per nine since his return in San Diego. That’s how I came to incorporate luck into this. Still a bad move. Always will be.)

Nathan Karns is another casualty without whom this season would certainly be better, record- and strikeout-wise; he was striking out 10.13 per nine before surgery for thoracic outlet syndrome.

Also: Miguel Almonte is projected at 9.11 K/9 via Steamer, had 8.7 K/9 in the minors and 8.4 K/9 over parts of two big-league seasons. Which… probably would’ve been more helpful than whatever it is Abraham Almonte purports to do on a daily basis.

Also also: Scott Alexander averaged 92.43 mph on non-offspeed offerings last season. He might’ve helped too, although that trade got the Royals out from under Joakim Soria’s onerous contract. Something something win some, lose some. Oh wait, that’s the whole saying.

All hat, no cattle

Not every team gets a Jordan Hicks or Aroldis Chapman. That the Cardinals and Yankees do is just an injustice and an insult TO GOD HIMSELF.

Anyway, those two guys lead the majors in average pitch velocity according to Statcast. The first Royal one finds on the list with a minimum 150 fastball-type pitches is Kelvin Herrera (no surprise) clocking in at 24th with an average 96.5 mph. After that…

(wow, this is taking a bit)

Overall, the Royals average fastball speed of 92.3 mph ranks 12th according to Statcast. Broken out by relievers (92.9 mph, 14th) and starters (91.8 mph, 15th), the Royals are top-half in each. But just barely. The perceived velocity of 92.41 mph is actually eighth, which is even… pretty good?

Here are a couple things that are less good:

For starters (as in to begin with, not in reference to starting pitching), an 8.0 percent whiff rate is just terrible. Only San Francisco (7.9 percent), Detroit (7.7) and Texas (7.0) and Giants aside, the other two are just terrible teams. You know, like the Royals.

Then there are the number of barreled fastballs. Toronto (118) leads the majors in fastballs barreled by opponents, followed by Texas (111) and Baltimore (108)(Texas is really bad)(the Royals can take the season series starting next Monday)(this is an awkward way to write). Then there are the Royals, tied with Arizona for fourth-most at 107.

Take that knowledge and put it with this:

All of a sudden, the Royals are looking pretty bad at the whole fastball thing. It’s small wonder they’re one of 11 teams across baseball throwing heat less than 60 percent of the time.

Let’s take (casts around randomly) the Dodgers. The Dodgers don’t throw a high percentage of fastballs but when they do, they get some whiffs (10.4 percent) and have a little bit of oomph behind them (92.3 mph, same as the Royals). 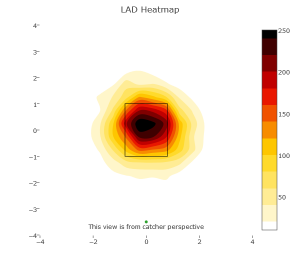 See how it’s darker in the center and working out, because not only can Dodgers pitchers throw please-hit-me fastballs down the middle on 3-0 counts, they can work the corners to varying degrees of success? Yeah, that’s the good stuff. 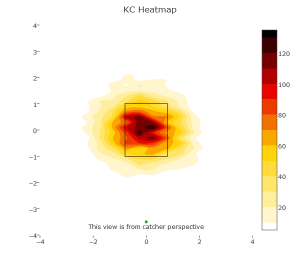 Boy. That looks like it was scrawled by my 10-month old, only after I woke him up early from a nap and told him he couldn’t have animal crackers until he made some marks on a page, and he understood what words actually meant.

You: But the Royals are young!

Okay, cool. Here’s the Atlanta Braves map, many of whom are barely old enough to buy beer, similar to the Royals. 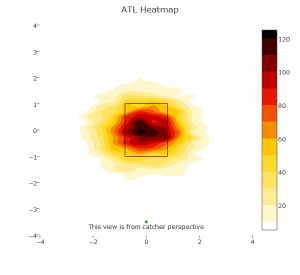 Why that looks rather competent, it does. Plenty of reds and burnt oranges all through the strike zone. No huge patches of yellow/yellow-orange on the lower and upper ends of the zone.

Unlike… look, you get the idea. The narrative here is that the Royals don’t strike anybody out, really. They also don’t walk anybody, but fortunately they’re holding their own in the three true outcomes sense by allowing a league-high 97 home runs. In an era defined by three true outcomes, the Royals are only really accomplishing the one that hurts them the most.

Tags: Brad Keller, Kansas City, Kelvin Herrera, Royals |
Colby Wilson
Follow @@CWilson225
I watch the box with the moving pictures and write about what I see. I tweet, mostly pictures of my dogs (aww), thoughts about being a new parent (awww!) and things I think about sports and beer and movies. That's @CWilson225 if you're interested.
read more from Colby Wilson

2 comments on “The Royals and the Other K”