Even though the Royals play like a minor league team, they don’t get the benefit of the rules of some minor leagues where the second half is a clean slate. That means they bring a horrific record into the first series of the “second half” against the Minnesota Twins, a team that has plenty of issues of their own. A strong finish before the break has put them in striking distance of the disappointing Indians, but they’re so far out of a wild card spot that the division is their only hope and it’s quite unlikely. The offense isn’t bad, but it isn’t good. The starting pitching isn’t truly horrible, but it isn’t good. And the bullpen has its bright spots, but it isn’t especially good either. This is a team with the upside of being pretty okay and the downside of finishing with 73 wins. It’s the dreaded middle ground. 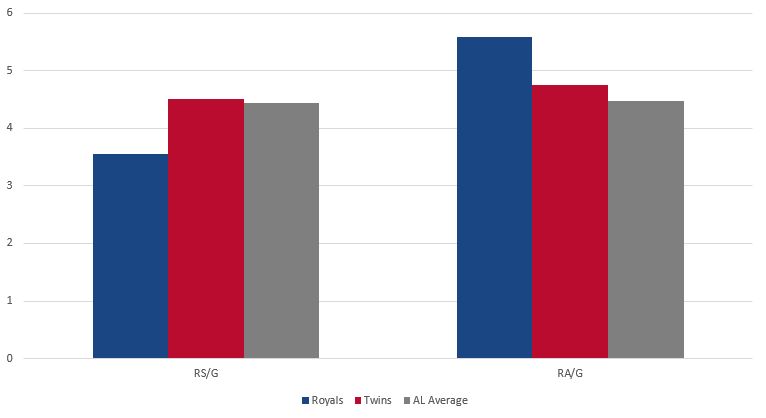 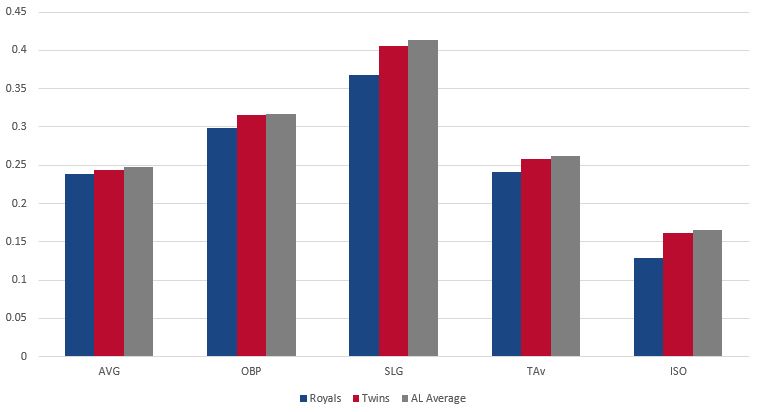 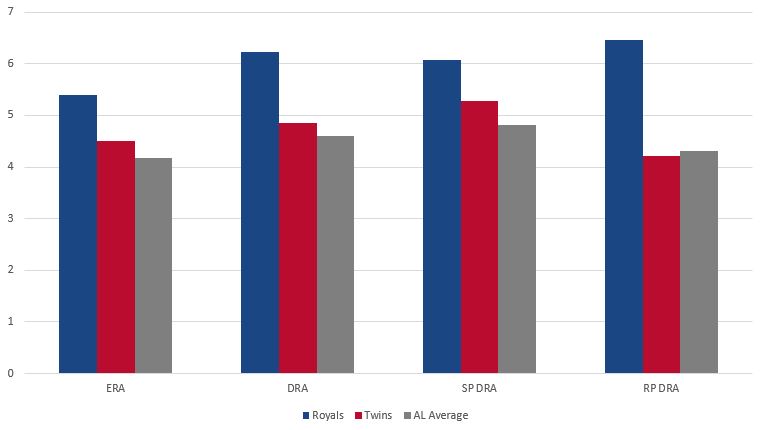 Gibson putting it together is simultaneously shocking and expected because the stuff has always been there and also the way he’s handled the Royals in his career has made us believe he was actually never bad. But even so, he’s striking hitters out for the first time in his career, which makes his walk rate that’s a little too high palatable. Add in that he’s been tough to hit and isn’t even giving up much in the way of home runs and he’s pitching like a guy who can actually help a playoff contender if the Twins choose to move him. The tall righty still shows solid velocity at 93-94 on both his four- and two-seamer. His slider has turned into a beast of a pitch, holding opponents to a .118 average and .215 slugging percentage with 49 strikeouts this season in 93 at bats. There is a bit of luck in the profile as he’s been unreal good with runners in scoring position, holding opponents to a .460 OPS compared with .713 with the bases empty. That’s a good sign regression is coming to some extent, but it won’t be enough alone to knock him out of the “good pitcher” category. He’s already thrown seven shutout innings against the Royals once this year, and I bet he’s not afraid to do it again.

Duffy ended the first half in style, throwing 13 consecutive scoreless innings over his final two starts. He struck out 17 and walked five while giving up just 10 hits in those two starts, so he’s on a good run. One of those two starts was against these very Twins and his 11 percent whiff rate was very good in that one. He was up to 14 percent in his last start against the White Sox, so that’s all very encouraging for a strong second half from Duffy. In all, he’s posted a 2.73 ERA in his last 10 starts and has generally looked like the Duffy of old. If he can figure out how to work around Robbie Grossman of all people, he should be okay given his history against Twins hitters. In his last start against the Twins, both his changeup and his curve did the damage for him, so look for those pitches to play a big role in either his success or lack thereof.

It’s been a weird year for Lynn, as we talked about when he matched up against the Royals before the break, which is actually his last start, 10 days before this one. He started off with a brutal April that saw his ERA over 8.00, but he’s settled down quite a bit since then, going 7-4 with a 4.12 ERA and about a strikeout per inning with his walk rate down enough to be acceptable. The big number for him is that he’s allowed five home runs since April after allowing five in April itself. He went just five innings against the Royals on July 11th, allowing four runs on five hits and throwing 114 pitches, so pitch efficiency isn’t always his friend. He also allowed two of the five homers he’s allowed since April in this one. His sinker gave him the most trouble, while his four-seam fastball was the best pitch against the Royals, so we’ll see if he throws even more fastballs than he did last week. Mike Moustakas is a career .313 hitter against Lynn with three home runs, including one this season against him.

Junis makes his return to the Royals rotation for this one, after hitting the disabled list for the first time his career with lower back inflammation. It’ll be his first start since July 2 when he gave up nine runs (eight earned) in 5.2 innings against the Indians with two homers allowed and three hit batters. Junis has given up a big league high 24 home runs this year and 12 of them have come in his last five starts spanning just 27 innings. That’s a number that would make Chris Young blush. The hope here obviously is that his back was causing him problems during that stretch because that would at least be a cause for his issues. In three of his last five starts, his slider hasn’t been nearly up to snuff and if he doesn’t have that, he doesn’t have much. His sinker, which looked like a potential second out pitch early in the year has been bad in four of his last five starts. Both those pitches would suffer when the back suffers, so maybe, just maybe. He faced the Twins in late May and allowed three runs on six hits in six innings, walking a season-high four batters and hitting one.

Odorizzi has been away from the Royals organization for so long that it takes a minute sometimes to remember that he was ever in it. The Twins acquired him with the hope that he would stabilize the middle of the rotation and he’s been fine enough. He’s striking out a ton of hitters at the second highest rate of his career with a very strong 23.7 percent rate. He’s also walking players at the highest rate of his career, tied with last season. Hitters are having an inordinate amount of success against him when the at bat ends on the first pitch. He’s allowed a .474 average and .974 slugging percentage in those situations, which is truly incredible. He’s also really struggled with the bases empty, allowing a .296/.375/.540 line, so if you put two and two together, you can be somewhat confident in a base hit to lead off an inning from someone. And if you want to talk about a third time through the order penalty, Odorizzi is the poster child. He’s allowed a .698 OPS the first time, .651 the second time and a robust 1.379 the third time through. Get him past 75 pitches where he allows a 1.158 OPS and even the Royals might be able to score some runs against him. He’s posted a 2.12 ERA against the Royals the last two years, allowing just four runs on 10 hits in 17 innings.

Keller looks to bounce back from the worst start in his career. He gave up five runs on seven hits in 2.2 innings and walked four more batters. Now he’s given up nine runs in his last 7.1 innings with nine walks allowed in his last two starts, so the question is if the league is starting to get a book on him. I guess we’ll find out the answer soon enough. Still, as a starter, he’s thrown 41 innings with a  3.73 ERA, but a 23:20 strikeout to walk ratio just won’t cut it and he’s given up 43 hits as well, so there have been tons of base runners. The saving grace is that he still hasn’t allowed a home run as a starter and has actually faced 235 batters since the last long ball allowed. I don’t think I care enough to look it up, but I’d guess that’s one of the longest streaks in baseball this year. The Twins, as a team, have just a .335 SLG against sliders, and when Keller has been really good, he’s had the slider working, so that seems to be an important pitch for him in this one.

Again, I promise to always predict that the Royals will be swept until they win a series, so get ready for three more home losses, friends.

Tags: Brad Keller, Danny Duffy, Jake Odorizzi, Jakob Junis, Kyle Gibson, Lance Lynn |
David Lesky
Follow @dblesky
I've been a Royals fan since the day I was born, and have had the opportunity to write about the Royals for nearly a decade now. The winning was better than the losing, but the losing is kind of familiar at least.
read more from David Lesky