When you have powers like the Kansas City Royals and New York Yankees squaring off, the whole baseball world will take notice. The Yankees, of course, are one of baseball’s best teams, owning the second best record in the whole sport. It’s unfortunate for them that the best record belongs to the team ahead of them in their division. Even without Gary Sanchez, the lineup is truly impressive with at least average hitters from top to bottom. And they all have power. They do strike out a lot, so that’s a weakness to exploit, but that’s about it. If they have a weakness, it’s their starting staff beyond Luis Severino and CC Sabathia, but they have very capable pitchers in the rotation who just haven’t performed as well as they should. And the bullpen is ridiculous, especially with the addition of Zach Britton. They come at you with fire from the right and left side. It’s honestly almost not fair. This is a ridiculously good and deep team. 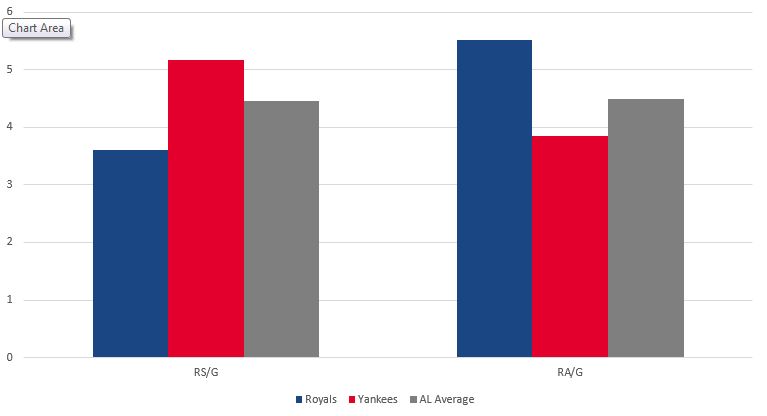 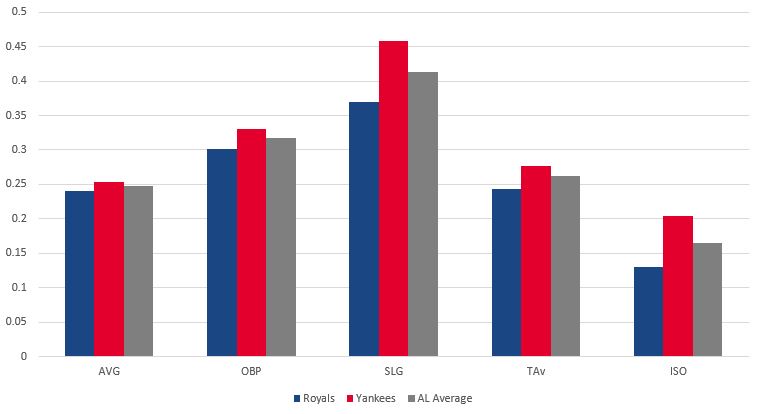 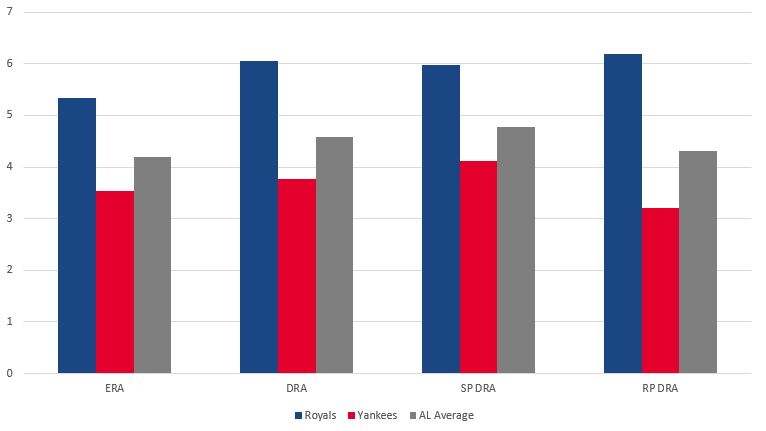 Things haven’t gone great for Gray this season, especially in Yankee Stadium where he’s posted a 7.62 ERA with 52 hits allowed in 41.1 innings and struck out just 31 while walking 26. On the road, he’s been his usual self, so this is pretty odd and almost certainly a case of being in his own head. His velocity is fine, averaging around 94 on his four-seamer and his sinker. His curve has been as good as ever and his slider is very good too with those two pitches accounting for most of his strikeouts. But he’s just been hit hard at home and struggled with control there. He did face the Royals earlier this season and went eight innings, allowing just a run on four hits, but that was out of the confines of Yankee Stadium. No Royals have much experience against him, but most have struggled mightily in their limited exposure to him.

Junis came off the disabled list on Saturday night and looked a lot like the Junis we were gushing over early in the season. He only went four innings because of pitch count and he wasn’t especially efficient with his pitches, but he gave up just a run on four hits and threw plenty of strikes and, maybe most importantly, didn’t allow a home run. This’ll be a tough one to build on that with the Yankees offense and park, so I wouldn’t expect too much, but if he does well, it’ll be a huge boost for both his confidence and the fan’s confidence in him (though one matters less than the other). He did pitch against the Yankees earlier this year in Kansas City and actually got the win, allowing just two runs in 5.1 innings against them with no home runs. That was a simpler time for the Royals.

Sabathia has figured out how to pitch as a different guy than he was when he was tormenting the AL Central with the Indians. He now lives on his cutter and slider more than any other pitches. The cutter breaks 90 occasionally, but usually sits around 89 MPH. His slider has been hit a little better than you’d like, but also has been good for his second highest whiff percentage among his pitches, so it’s a plus enough that he keeps using it heavily. It’s really amazing how well he’s managed to limit hard hit balls, ranking in the top one percent of the league with just a 26.9 percent hard hit rate against him. In spite of figuring it out so well, he still is a totally different guy when facing a lineup a third time, allowing a .367/.404/.644 line. That doesn’t seem to be a problem, though, with how deep the Yankees bullpen is. In his career, he’s 21-12 with a 3.15 ERA in 40 starts against the Royals, which doesn’t mean much, but that’s a lot of games.

Keller shook off two horrible starts before the break to pitch very well against the Twins on Sunday and setting a career high with eight strikeouts over seven innings. And he was very pitch efficient as well, throwing just 99 pitches. Now, there was a bad thing in that he gave up his second home run of the season, but that’s still very impressive in 70.1 innings. He’s now made nine starts for the Royals and even with a couple of those starts being on a strict pitch count and struggling for two, he’s averaged more than five innings per and has posted a 3.75 ERA as a starter. Again, the concern remains the lack of strikeouts and too many walks as he’s struck out just 31 and walked 22 in his 48 innings as a starter. His propensity for ground balls will play well in Yankee Stadium, so I’m cautiously optimistic he can build on his last start.

It’s hard to believe that just two years ago, the Yankees weren’t sure what to do with Severino as they had to shift him to the bullpen. The last two years, he’s been amazing and he’s having a phenomenal 2018 with those shiny numbers you can see above. His repertoire is simple. He throws 98 with his fastball half the time, throws a devastating slider that’s about as hard as Sabathia’s fastball 37 percent of the time and then a changeup for the rest. If anything has been a problem for him, I guess it’d be the changeup, which he’s allowed a .291 average and .400 SLG against, but that’s really splitting hairs because if that’s your worst, you’re pretty darn good. If you’re looking for signs of trouble, he does have a 7.80 ERA in his last three starts and has only averaged five innings per with 25 hits allowed in that time and six home runs. Maybe he’s wearing down? Maybe it’s just a blip. The Royals actually did okay against him earlier this year, scoring three runs on eight hits against him in what was still a loss for the boys in blue. I imagine this one won’t go as well for the Royals, but I guess you never know with that short porch.

If Fillmyer doesn’t hurt his hand punching Brandon Maurer, he’s in line for a well deserved third start after pitching exceptionally well against the Tigers Monday night. He’s pitched very well on the whole this year with a 2.82 ERA and fewer hits than innings pitched, but until Monday, he hadn’t done well with strikeouts. Against the hapless Tigers, he struck out six in 6.2 innings and gave up just one earned run. So far, Fillmyer has done an exception job of keeping hitters from barreling the ball, allowing just one in 64 batted balls. His slider has a whiff rate of 37.8 percent and his changeup is up at 24 percent, so his strikeout numbers could very well be better than they are. I was never impressed with Fillmyer in the minors, but he’s shown enough that he at least deserves some more chances in the rotation for now. And what better way to earn even more chances than by having to shut down one of the best offense in baseball?

Tanaka has been really uneven this season, but is coming off his best start of the year by far. It was a shutout of the Tampa Bay Rays on Tuesday night when he allowed just three hits and walked one while striking out nine. If that’s a sign of things to come, the Royals are in trouble. He has had a little trouble with the home run ball, so if the Royals still have Mike Moustakas and Lucas Duda on the team for this game, maybe they can take advantage of right field against him, though righties shave actually hit for more power against him, so maybe the onus is on Jorge Bonifacio and Salvador Perez. He still gets a ton of whiffs on his slider and splitter, but those numbers are down from previous seasons. Even so, I imagine the Royals will flail wildly a few times in this one and make him look good, but even so, his slider can spin sometimes and that’s what has led to the .273 ISO against it, so maybe the Royals can take advantage there. Like Sabathia, he is really a two-times through the order guy as he’s allowed a .284/.354/.622 line the third time, but again, the bullpen makes it possible to get him out after five pretty much every time.

And completing the tour of starters who had very fine starts in the last turn is Burch Smith, who was outstanding against the Tigers until he seemed to run out of gas in the seventh and then had two runners he left on score on a home run by the corpse of Victor Martinez. Smith is on a nice run in general with a 3.32 ERA in 21.2 innings going back to June 19th. In that time, he’s allowed just 17 hits and struck out 21 while walking five with one home run allowed. He’s looked pretty good actually at times, so this’ll be a fine test for him. I imagine he won’t pass it, but I’ve been wrong before. He did go three innings against the Yankees in May in Kansas City and gave up just a run with no walks allowed, so maybe he’s got their number? Probably not, but maybe!

Tags: Brad Keller, Burch Smith, CC Sabathia, Heath Fillmyer, Jakob Junis, Luis Severino, Masahiro Tanaka, sonny gray |
David Lesky
Follow @dblesky
I've been a Royals fan since the day I was born, and have had the opportunity to write about the Royals for nearly a decade now. The winning was better than the losing, but the losing is kind of familiar at least.
read more from David Lesky