After a long road trip, the Royals come home and hope to find some wins against…the best team in the National League, the Chicago Cubs. Even with the best record in the National League, you might be able to make an argument they’ve underachieved a bit as they have a fantastic lineup from top to bottom, even with Kris Bryant on the disabled list. I think it’s just that you feel like the rotation should be better than it has been even though it’s really been fine. Jose Quintana isn’t having the season people expected and neither is Kyle Hendricks. Add in Yu Darvish on the disabled list and ineffective when he isn’t, and you can see why they traded for Cole Hamels. In the bullpen, they’re missing their closer, Brandon Morrow, but they have a lot of quality arms, including new acquisitions Jesse Chavez and Brandon Kintzler. 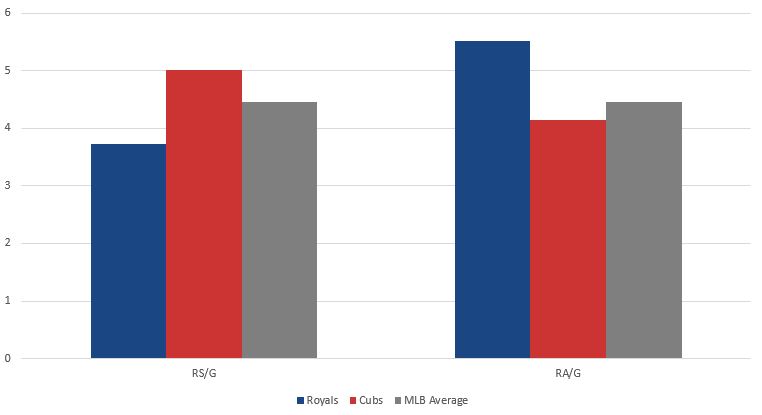 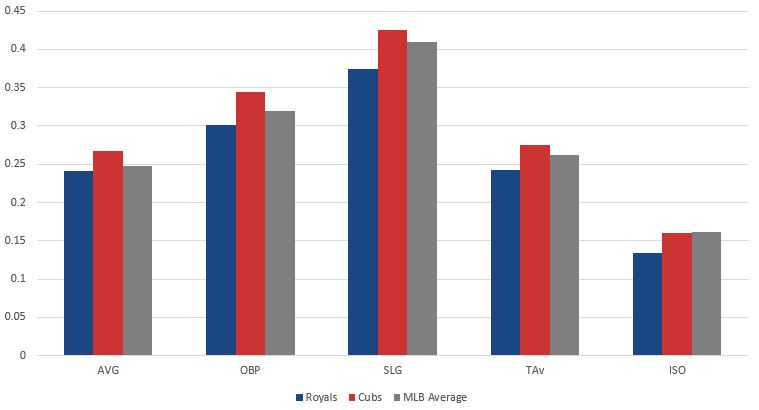 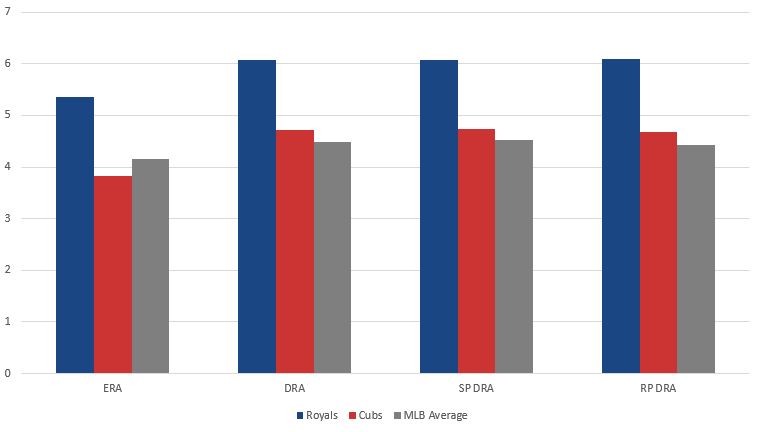 The Royals have already seen Hamels twice this year and will now see him in his second start for the Cubs after being acquired for the stretch drive at the deadline. In those two previous starts, the Royals handled him just fine the first time before getting shut down by him over seven innings the second time. In the five American League starts following his excellent start against the Royals, Hamels really struggled, posting a 10.23 ERA over 22 innings. He was excellent in his Cubs debut, though, so what I’m saying is it’s hard to say what he’ll do. A lot of inconsistency has plagued the veteran lefty this season. He had a big issue in Texas this season, which seems like a pretty good explanation for his struggles. Away from there, he’s struck out more than a batter per inning and posted a 2.69 ERA. This game is not going to be played in Texas if you were wondering.

Junis is still trying to find that magic from early in the season. He got his first win in more than two months in his last outing, but there was still plenty to be desired. Even with a 10-1 lead, he couldn’t get out of the sixth inning and ended up giving up four runs on six hits with three walks. His slider looked better to the naked eye, but there is just something not clicking with him. I’m not sure if maybe this is just who he is and he’s not someone the Royals can count on long-term or if he’s still dealing with coming back from his back injury, but something needs to give soon. This Cubs lineup seems like a really bad matchup on paper as they have so much power up and down the lineup, but if he has that slider working, he can handle anyone, so I guess we’ll see.

Once the Royals top pitching prospect in a loaded farm system, Montgomery has bounced around a bit, but he seems to have found a home with the Cubs. Aside from recording the last out of the 2016 World Series, he’s been very valuable to the Cubs as a swingman, though he’s made it clear that he’d like to start, which he’s been doing since the end of May. And as a starter, he’s gone 67 innings with a 3.36 ERA. He hasn’t allowed many home runs, but he also hasn’t been missing many bats, so there’s an opportunity to BABIP him like crazy. Montgomery throws a two-seamer at about 92-93 MPH to go along with a curve, changeup and a four-seam fastball. He also throws the occasional cutter, but it’s mostly a show pitch. The curve and the changeup are his money pitches with those two accounting for the vast majority of his strikeouts. The Cubs are pretty careful with him, as he doesn’t face a lineup a third time very often. He’s only topped 90 pitches in four of his 12 starts and threw 100 just once, so he might be out sooner than later, even if he’s pitching well.

Keller recovered from a not so wonderful start against the Yankees to strike out nine over 6.1 against the White Sox with 13 swings and misses. Some of that can be attributed to the White Sox, but Keller was lit up by that same team just a couple weeks earlier, so it was nice to see him do that. Until he can do it consistently, there will always be a question in the back of my mind if Keller can be good enough to start for a good team. He either needs to cool it with the walks or consistently get strikeouts. To this point, it’s very hit or miss and this Cubs team walks a lot and actually doesn’t strike out all that much outside of a couple guys. But if he can have his sinker working and get ground balls, he can work around the lack of swings and misses. It’d just be helpful if he could get the swings and misses.

After seeing Quintana three to five times a year for a long time, the Royals get their first look of the season at Quintana in this one. After five years of being really, really good for the White Sox, he struggled a bit last year before being traded to the Cubs and he’s kind of kept up the slight struggles this year. He’s still striking out his usual solid but not spectacular number of batters, but his control has eluded him a bit this year, walking 52 in 113.2 innings. In his last three full seasons with the White Sox, he threw 200 or more innings each year and walked 52 or fewer in all of those, so that’s a full season of work. Every pitcher is worse when they’re behind in the count, but Quintana is especially bad, allowing a .317/.514/.611 line in those situations. He throws a lot of first pitch strikes, so you can’t really go up there with the idea of taking, but it might be worth a shot early at least. He’s faced the Royals more than any team in his career, going 3-9 with a 4.05 ERA in 24 starts and 157.2 innings. Among current Royals, nobody has hit him exceptionally well, but Salvador Perez and Alex Gordon have both been pretty good against him.

Fillmyer didn’t have it in his start against the Twins on Friday. He threw 70 pitches in three innings and while the rain delay coincided with his exit, I’m not convinced he wouldn’t have been done either way. I just don’t think Fillmyer is good enough to be a big league starter, and this will be quite a test for him against that good lineup. The one pitch that I think has been better for him than I anticipated it would be is his slider, so we might have an idea of how Fillmyer’s outing might go after we see how Junis fares in the first game. If the slider is working, I think it’s a good enough pitch to get every hitter out, but it’s all going to play off his fastball. Looking back at his great start against the Tigers a few weeks ago, the four-seamer is what made the slider possible. If he’s getting the kind of movement on it that he did in that one, he does have a chance to be successful.

The Cubs are really good. The Royals are really bad. Weird things happen in baseball, but I don’t think they will in this series. I think the Royals take the middle game but end up losing the series.

Tags: Brad Keller, Cole Hamels, Heath Fillmyer, Jakob Junis, Jose Quintana, Mike Montgomery |
David Lesky
Follow @dblesky
I've been a Royals fan since the day I was born, and have had the opportunity to write about the Royals for nearly a decade now. The winning was better than the losing, but the losing is kind of familiar at least.
read more from David Lesky