Presenting the third annual BPKC Minor League Players of the Year awards. These are the players who stirred the drink for their teams and are listed below with a few caveats. To qualify, a starting pitcher had to make 10 starts or spend half of the season with the club, while a position player needed to play at least half of the team’s games with them.

The Chasers had a down and up season, starting off 8-17 in April as the team’s offense struggled early in the season. From that point, the Chasers played one game above .500 the rest of the way. They did this despite an offense that finished second to last in OPS and a pitching staff that finished in the same spot with strikeouts. Why did the team succeed? Defense is likely the biggest reason. On any given night, the Chasers often fielded major league caliber shortstop defenders in at least three if not four spots around the infield and sometimes a spot in the outfield. All around, their defense was high quality and the pitching staff saw a benefit most nights, while the promotion of Nicky Lopez and the steady bat of Frank Schwindel carried the offense on most nights in the second half.

Position Player
Frank Schwindel – One year after being named the BPKC Minor League Player of the Year, Schwindel was nearly as good with a full season in Omaha. The 1B/DH led the Chasers in nearly every offensive statistic, setting a franchise record with 38 doubles while also leading the squad with 24 home runs and 93 RBI. All told, Schwindel led the team in hits, runs, home runs, doubles, and RBI while also leading in many advanced hitting categories among qualified hitters on the team. The average for Schwindel took a dip this year to no one’s surprise after an expected dip in BABIP, but he did a decent job countering with an increase in walk rate (2.9%-6.1%). Defensively, Schwindel remains somewhat rough at the position but he has shown improvement and completed the season without making an error in the field this year.

Pitcher of the Year
Richard Lovelady – For the second year in a row, a left-handed relief pitcher took the pitcher of the year award for the Chasers. This season it was reliever Richard Lovelady who, much like the team, got off to a slow start before hitting his stride and dominating much of the season. The reliever at the end of May had a 4.21 ERA with under a K per inning but from June 1st on, the lefty limited the PCL to a 0.82 WHIP, a 1.51 ERA and 9.5 K/9. The sidearmer dominated lefties as one would expect with a .157 average against, but more than held his own against right-handed hitters a .587 OPS against him for the season. These numbers helped Lovelady become the most consistent member of the bullpen for the Chasers, giving them 73 innings  while leading the team in saves.

During both the first and second halves of the season, the Naturals put themselves in big holes with a bad month of baseball before turning it on only to fall just short of the postseason. The first half saw NW Arkansas tie Arkansas for first place only to lose in the difference-making game. To start the second half, the Naturals got off to a brutal 4-22 start which put them 15 games back of first place Tulsa. The pitching would get hot from that point leading the Naturals back to within three games before a few late season losses left them five games back and at .500 for the year.

Position Player
Jecksson Flores – This one was difficult as shortstop Nicky Lopez fit the criteria for playing with the Naturals for 73 games while leading the squad in OBP and dominating during May and June with a .363 average prior to his promotion to Triple-A. Even with those numbers, Flores is the player who stirred the drink more than any other on the Naturals roster. He became the first Naturals hitter to lead the Texas League in hitting since Clint Robinson in 2010. The most consistent member of the lineup, Flores led the team in hits, average and doubles while finishing second on the club in runs scored, stolen bases and OPS. In addition to offensive stats, Flores played all over the field defensively for the squad playing 44 at second base, 40 games at third, 22 at shortstop and 14 more in the outfield to prove the ultimate weapon all over the field. 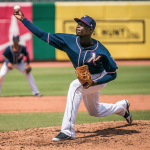 Pitcher of the Year
Yunior Marte – The Naturals couldn’t find consistent starting pitching for much of the year and were led by relievers for much of the season. No reliever was put to use more often than Marte who finished second on the team in appearances while leading the bullpen with 80.1 innings thrown. Marte also led the bullpen in strikeouts (8.96 SO/9) and WHIP (1.22) while putting up a 2.91 ERA. The righty was able to do this by dominating opposite-side hitters, limiting lefties to a .186/.286/.291 slash line against him while holding his own against same-siders with a .241 BAA. The Dominican born Marte has proven to have a rubber arm in his career with the Royals and may get a look by another team in the Rule 5 draft this offseason.

The Rocks season was a bit uneven with the team finishing eight under .500 during the first half of the season due to a poor May that saw them go 9-20. The second half saw the club jump out to a lead in the division the with the addition of Blake Perkins before the offense went missing during the middle of August, leading to a 12 game losing streak that cost the club the second half title, finishing five games behind Lynchburg. 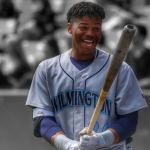 Position Player of the Year
Khalil Lee – This one was a difficult call with the usual lack of offense in Wilmington. At different times it seemed like D.J. Burt might get the call, but a rough August drove his numbers down, while an injury may have prevented Emmanuel Rivera from taking the award despite a late charge (.913 OPS in August). Both of those players finished just short of Lee however, as the outfielder played 71 games and led Rocks in qualified OPS by that standard. In his games with the Rocks he did a number of impressive things, but reaching base was the tops as he carried a .402 OBP despite turning 20 just this past June. Lee did this with a .270 average while also earning 41 free passes in his 71 games played. The numbers were relatively balanced for Lee with his .811 OPS balancing with a .804 road OPS, something that can be difficult to do for hitters in the spacious home park. In addition to the OBP, Lee was efficient on the bases, stealing 14 bases in 17 tries while scoring 42 runs and driving in 41. All of this was done while playing primarily in centerfield for Wilmington before his promotion to Double-A.

Pitcher of the Year
Gerson Garabito – Wilmington’s pitcher of the year Garabito led the Carolina League in ERA among starting pitchers while finishing third in innings and fifth in total strikeouts. That 142.1 innings was significantly higher than his previous career high (80.2 in ’16). The right-hander struggled with his walk rate (4.6 BB/9) but he was able to mitigate the damage with just 117 hits given up and finishing well with a 7.3 K/9 rate. These numbers would lead the team’s starters in starts, strikeouts, WHIP, wins, and innings pitched. Most of these numbers were compiled on a strong finish for Garabito which saw him go 6-1 with a 2.24 ERA over his final 14 starts, setting him up for a promotion to Double-A next season.

Easily the best team in the Royals farm system this past season was the Low-A Lexington Legends, with the club finishing 16 games over .500. The Legends finished tied for second in the first half of the season before winning the second half, despite starting that half with a six-game losing streak. They did this on the back of the league’s second-best offense while the pitching staff finished in the middle as a whole but looked quite dominant at times with many members of a talented starting staff. 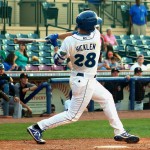 Position Player
Brewer Hicklen – Another difficult call on this one with Seuly Matias hitting 31 home runs in just 94 games alongside MJ Melendez and his 54 extra base hits. Despite those numbers, the most well-balanced player on the offense was outfielder Brewer Hicklen. The former UAB football recruit led the Legends in OPS with his .930 while also leading the team with his 29 stolen bases. He did this despite playing in just 82 games and not getting regular playing time with the team until the start of May. What Hicklen did best this past season was dominate southpaws, hitting .315/.389/.649 with 18 of his 43 extra base hits coming off of them. In all, it was an impressive season showcasing the power and speed tools that Hicklen possesses in his 6’2, 208 lbs frame.

Pitcher of the Year
Carlos Hernandez – The Legends had a number of pitchers who had quality seasons for the club whether it was Andres Sotillet, who earned a promotion to Wilmington, or Yefri Del Rosario and his strong finish to lead their qualified starters in ERA. Just missing the cut was Daniel Lynch who made nine starts while also being limited in innings after his college season. Even with those quality candidates, Hernandez was a step above the qualified group with his team-best WHIP and K/9 while his 3.29 ERA trailed only Del Rosario’s. The powerful right-hander finished with an outstanding flurry in his final six starts, tossing four starts of seven innings with an ERA of 1.41 against a WHIP below 1.00. A family issue slowed Hernandez out of the gate, not getting his first start until early May before an injury stopped his season short in August. In between though, he showed his powerful fastball, improving breaking ball and feel for a change can dominate hitters at times.

2 comments on “The Academy – Full Season Players of the Year”

Clint, what was Carlos Hernandez’s injury? Sorry he did not get chance to pitch in playoffs.