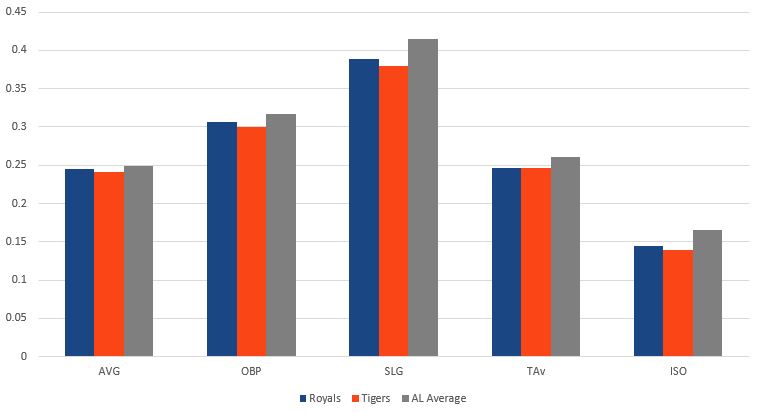 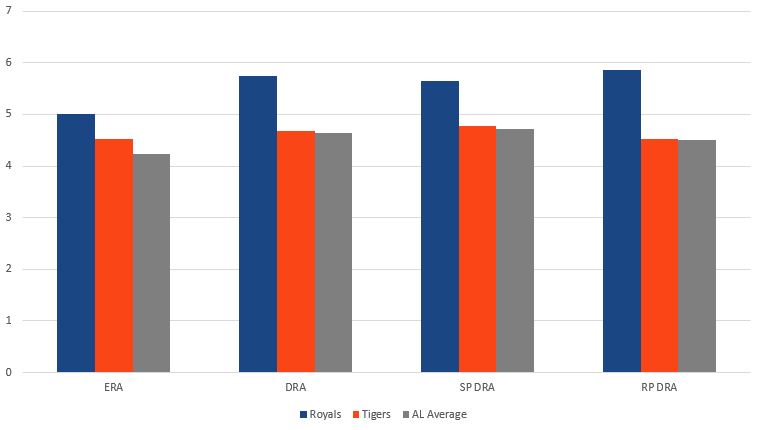 Boyd is having a nice season, getting a good chunk of strikeouts, showing similar to control to his almost solid 2016 season and limiting hits extremely well. He does a lot of his work with his slider, which has been truly outstanding this year. He’s recorded more than half his strikeouts with it and allowed a .165 average with a .263 SLG. It’s interestingly not quite as lethal against lefties, though still good, but he’s allowed a bit more power to same-siders off it. He’s put together this solid year while being surprisingly not great against runners in scoring position, allowing a .286/.333/.473 in those situations compared to .203/.279/.364 with the bases empty. He’s gone 1-3 with a 4.32 ERA against the Royals this year in four starts with just one home run allowed in 25 innings.

Lopez looks like he’s in line to make this start after leaving his last one with a chest contusion after running into Hunter Dozier. He couldn’t quite follow up his near perfect game, going just 4.1 innings before the injury and allowing three runs on nine hits, but he really fell apart after the pain started, so it’s probably not fair to box score scout. He threw four shutout innings to start, and if he has his curve working against the Tigers, that’s a team that hasn’t seen him before and a really bad lineup, so he has an opportunity to put up a fantastic start if it’s working for him. The one thing I’d like to see is the swinging strikes like he got against Baltimore when he had 14 in 99 pitches. This Tigers team seems like one he could absolutely dominate, so it might be fun.

It sure looked like a bounceback season for Liriano after his sixth start of the year when he shut down a terrible Royals team to bring his ERA down to 2.97, but things haven’t gone quite as well since. In his last 19 games (18 starts), he’s gone 2-9 with a 5.18 ERA in 88.2 innings and struck out 75 while walking a whopping 53. Basically this is who he is now, fast start or not. That said, he’s been decent in September, allowing just four earned runs in 18 innings, though he has allowed five unearned runs, so it’s not all roses for him. He hasn’t been too bad early in the games, giving up a .225/.324/.326 line the first time through the order with a 3.86 ERA in the first three innings. But the second time through is a disaster with an .855 OPS allowed and the third time through is slightly worse at .863. It’s a small sample, but Jorge Bonifacio is 3 for 5 with two doubles and a homer against Liriano. I’m guessing he’ll be in the lineup for this one.

I think most people are ready for Ian Kennedy to just be done, but he’s got two more years under contract and it’s worth mentioning that in his first two starts off the DL, he’s been quite good. He’s gone six in both starts and allowed just two earned runs total while striking out 10 and walking five. The biggest thing for him, though, is no home runs allowed. It’ll be his first start against a team other than the Twins since June 29th, so maybe this is another real test for him. Kennedy, if healthy, is going to be in the rotation next season, so it’s in the Royals best interest for him to pitch well because that’s better than the alternative.

Given how bad Zimmermann was last season, this year has to be considered some sort of success even if it hasn’t been that great. Of course, he matches Liriano’s 5.18 ERA in his last 11 starts since the All-Star break. He’s not striking hitters out and he’s giving up tons of long balls with 17 allowed in that time. Lefties have crushed him, which I’d think bodes well for Ryan O’Hearn and Adalberto Mondesi, especially considering he’s not only easy to hit, but he’s around the strike zone a lot. Given that the stuff isn’t especially good anymore, he’s been hit hard on the first pitch with a  .400 average allowed and an .833 SLG. That’s six homers in 61 plate appearances that ended there, which isn’t a great number to have. He’s been fine against the Royals, but he struggled in his last start against them in July, going five innings and giving up four runs on seven hits and two homers.

Junis had been so good for awhile since coming off the disabled list, but the home run ball has returned and he couldn’t get out of the fourth inning in his last start against the Twins. He’s now allowed five homers in his last two starts, and even though one was an eight-inning outing, there’s a little reason for concern. Luckily, Junis has purchased the Tigers from the Ilitch family as he’s gone 4-0 with a 1.74 ERA in four starts against them, going 31 innings, allowing 21 hits and striking out 25 while walking just three. It’s been a pretty impressive display and he’ll get the opportunity to go 5-0 against them in this one.

It wasn’t supposed to be like this for Norris. He finished so strong as a 23-year old in 2016 that it looked like he was about to really emerge as a solid starter for the Tigers for years to come. Now, his fastball velocity is down to 90-91 after averaging nearly 94 in that 2016 season. He’s been mostly a two-pitch pitcher this year, using that (with some horrible results) and a slider (with some much better results). My guess is that if the velocity doesn’t come back, he won’t either, but the Tigers need bodies, so here he is. He is still striking out a ton of hitters with 40 strikeouts in his 34.2 innings, but he’s been a bit homer prone and just generally not all that good. He did pitch reasonably well his last time out against the Twins and he held the Royals to one run over 4.2 innings back in April, so that’s a couple things to build on for him if he’s looking.

Keller picked up his first career hit and run scored in his last outing, but continued to impress on the mound even though it wasn’t a great start for him. Yes, he gave up four runs on 10 hits in six innings, but he struck out seven and got a ridiculous 19 swinging strikes in 109 pitches. His slider was the king in this one with 11 swings and misses out of 17 swings and 31 total thrown. That slider could be a huge difference maker for him as he tries to stick as a starter into next season and beyond. He hasn’t faced the Tigers as a starter, so it’ll be a test for him, but if his slider is working, the success of Junis against them should bode well for Keller.

Like I said at the top, I think the Royals are better, but they’ve got some road woes still and four-game series are notoriously hard to win, so I’ll go with a split here, but at this point, nothing would surprise me.

Tags: Brad Keller, Francisco Liriano, Ian Kennedy, Jakob Junis, Jordan Zimmermann, Jorge Lopez, Matthew Boyd |
David Lesky
Follow @dblesky
I've been a Royals fan since the day I was born, and have had the opportunity to write about the Royals for nearly a decade now. The winning was better than the losing, but the losing is kind of familiar at least.
read more from David Lesky