Despite the usual rhetoric, the Royals minor league squads started winning almost immediately, taking championships at multiple levels along the way to a 2015 World Series title. The first championship came at the Low-A level in 2008 at the Midwest League after the Burlington Bees rode a second-half division title into the playoffs and through a perfect playoff run. Ten years later, the Royals front office built another Low-A championship as the Lexington Legends defeated the Lakewood BlueClaws for the South Atlantic League title. Ten years apart and built in similar fashions but how does this recent championship team compare to that one? 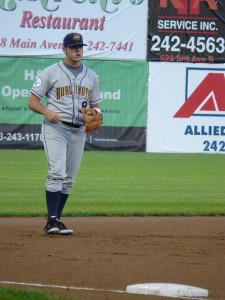 The 1st Round Pick – Both teams had a 1st round pick who struggled in the early part of their season before finding a groove.
Burlington SS/3b – Mike Moustakas – Yes, Moose started the season at shortstop for the Bees playing 57 games there before making his move to third in June and playing there primarily during the second half of their season. .272/.337/.468 22 HR – Midwest Lg HR leader
Lexington 1b – Nick Pratto – the Royals 2017 1st round pick actually got on base at a higher clip and hit for a slightly higher average, finishing one extra-base hit shy of the 50 Moustakas put up. They did it in different fashions with Pratto striking out at nearly 13% higher clip.

The new pitcher with a strong finish – The seasons that Danny Duffy and Yefri Del Rosario put up 10 years apart were strikingly similar with both pitchers getting off to slow starts in their first three outings before getting in an outstanding groove. 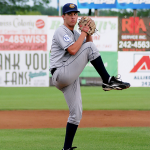 With an 8.49 ERA after three starts, Duffy didn’t give up more than three runs in any of his final 14 starts while allowing just 15 runs in 70 innings against 84 K’s

After a 10.45 ERA in his first three starts, Del Rosario pitched his final 13 outings with just two starts of four runs allowed while giving up just 16 earned runs in his final 74.2 innings including his one shutout playoff starts against 68 K’s

CF/LF- David Lough – Aside from Moose, a big breakout prospect for the Bees was a former football player who showed off his athleticism in the outfield while hitting .268/.329/.455.
CF/LF Brewer Hicklen – It was Hicklen who led the Lexington team in OPS and stolen bases, having a breakout season after playing baseball while accepting a football scholarship at UAB. He finished at .307/.378/.552.

Both teams added players to help them make their playoff runs with Burlington adding Johnny Giavotella to the top of their lineup along with a fireballing right-hander named Kelvin Herrera earning a promotion from rookie level Burlington, NC getting a bump to the Iowa roster in mid-August. Herrera gave the Bees six innings of two-run ball in his only playoff start while Gio helped carry the Bees offense in the playoffs with a hit in all six games highlighted by five hits, five runs scored and five RBIs with a pair of home runs in the two-game championship series. Meanwhile, the Legends received multiple late-season additions in Daniel Lynch, Jackson Kowar, and Kyle Isbel just to name the 2018 draftees. The two drafted pitchers gave up just three combined runs in their four playoff starts while Isbel chipped in with a .779 OPS in his 39 minor league games.

The teams compare as a whole statistically, with the ’08 Bees having a slight advantage in team ERA 3.49 to 3.61 compared to the Legends advantage in offensive OPS .733 to .722 while scoring 65 more runs. One can see a major difference in strikeouts on the offensive end with the Legends striking out 304 more times during the season. That number didn’t translate on the pitching side however, with the Legends staff striking out just eight more hitters in an extra 17 innings thrown. 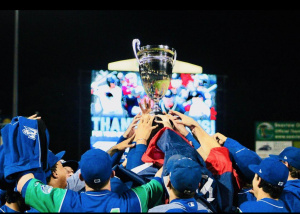 These comparisons don’t do the Legends a lot of favors as the team was very deep in talent, winning a championship despite their top prospect, Seuly Matias, missing most of the second half of the season. In addition to Matias, the Legends lost Carlos Hernandez who had a sub-3 ERA during his final 10 starts before encountering injury. Comparing the two teams, the Legends starting pitching appears far deeper with Lynch, Kowar, Del Rosario and Hernandez leading the way compared to Burlington’s staff that added Herrera very late to Duffy and one of their better pitchers during the season, Danny Gutierrez. One of the more talented arms on the staff was Juan Abreu who was lost via a free agency snafu by the Royals and made seven appearances with the 2011 Astros. While the gap in terms of pitching does favor Lexington, the gap offensively seems rather large with Pratto, Matias, Isbel and MJ Melendez leading the way while getting All-Star contributions from Sebastian Rivero and a quality season from Hicklen.

Team to team, I give the edge to Lexington as would former major leaguer and Bees alum Clint Robinson, who scouts for another organization, saying that the overall talent on the Lexington club is by far better. “Lexington was better in nearly every facet of the game minus the infield.” That said if the Royals get three established major leaguers like Moose, Duffy, and Herrera alongside four other major league contributors from this squad they will be well ahead of the game.

Featured Photo was taken from the Bees Blog