One of my favorite spreadsheets I keep during the year is what I call “The Royals Family Tree.” Basically, it’s a list of the Royals 40-man roster, along with how they were acquired.

In the past, it’s been a fun exercise. The most recent roster construction has rendered this mostly boring. That’s because the Royals, likely by design, have become dependent upon homegrown players acquired via the draft or international free agent signings.

Looking at the 40-man roster that just completed the 2018 season (along with those on the 60-day DL), a full 21 players were either drafted by the Royals or signed as international free agents.

If 21 homegrown players sounds like a lot, that’s because it is. According to Roster Resource, the average team has just under 16 homegrown players on their current 40-man roster. The Rangers, Giants and Pirates have the most at 22, just one more than the Royals. The Brewers and the Athletics have the least, with six.

The Royals have also made a pair of waiver acquisitions in Rossel Herrera and Ben Lively. Then there are the free agents: Ian Kennedy, Wily Peralta, Jason Adam, Jason Hammel and Scott Barlow. That all of the Royals free agent signings are pitchers isn’t a coincidence.

Without the roots that are established via trades, that can make the Royals Family Tree kind of bare. You would think with the emphasis on player development early in a rebuild, there wouldn’t be many players acquired through swaps. However, with the Royals that’s not actually the case. This roster has constructed with 16 trades. It’s just that most of those players were acquired with players the Royals had drafted or signed as amateur free agents. Two of the players were acquired for cash considerations.

That’s 12 of the 16 players acquired via trades with rather shallow roots. Mike Moustakas is the only player who netted more than one player currently on the 40-man. (Keep in mind, rosters are fluid. Jesse Hahn and Heath Fillmyer came over in the same deal that saw the Royals trade off Brandon Moss and Ryan Buchter. Buchter, of course, arrived in Kansas City in the trade that brought Brandon Maurer. That means Hahn and Fillmyer have roots that run just a little bit deeper, tracing back two sets of players.

The real stars of the Royals Family Tree are Jorge Soler and the soon to be departed Alcides Escobar. Witness:

1 — Soler was acquired when the Royals sent Wade Davis to Chicago.

3 — Odorizzi was acquired (along with Lorenzo Cain and Alcides Escobar) for Yuniesky Betancourt (and Zack Greinke.)

4 — Betancourt was acquired for Derrick Saito and Dan Cortes.

5 — Cortes was acquired for Mike MacDougal.

6 — MacDougal was drafted in the supplemental draft as compensation for the Royals loss of free agent Jose Offerman.

7 — Offerman was acquired for Billy Brewer.

8 — Brewer was acquired from the Montreal Expos in December, 1992 in the Rule 5 draft.

Kind of cool that Soler can trace his Royals roots eight steps and all the way back to the Expos. Take this post and win a bar bet. Toast to BP Kansas City when you get that beer.

October is really the only time of year to take this kind of stock in the roster. Everything is so fluid the rest of the year. As things stand with the current 40-man roster and players on the 60-day DL, here’s how the team was acquired. 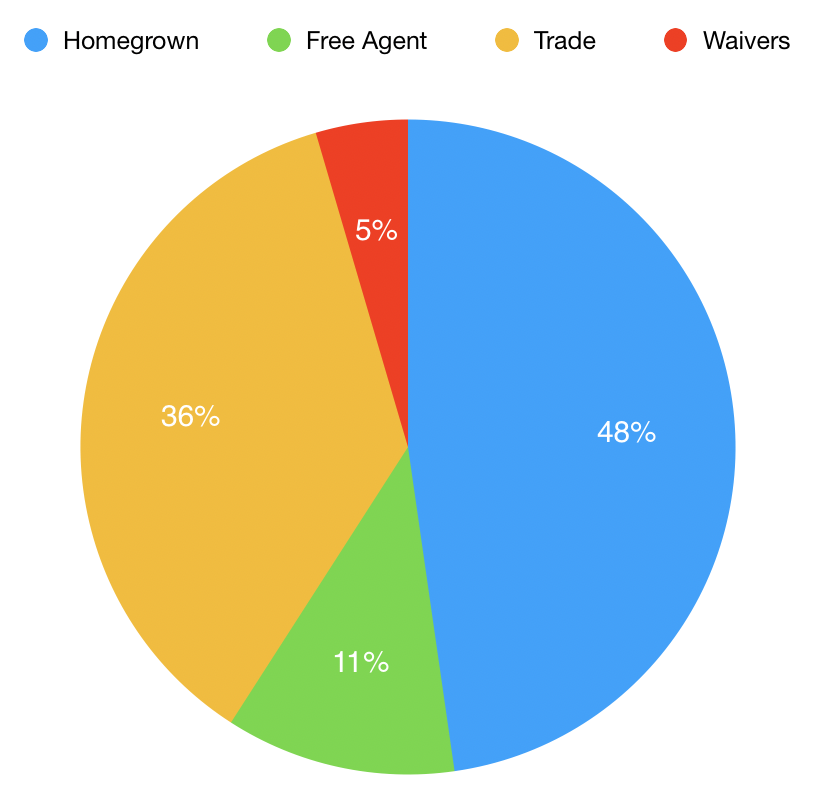 This will change as soon as the World Series is over and Escobar and Hammel depart the roster as free agents.

In the meantime, if this season truly represented the reboot of the Royals, maybe we should bookmark this page and revisit it in a few years time. You never know, this could be the start of the roadmap of success.