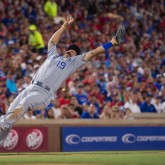 In rapid fire succession on Thursday, the Royals announced they had come to terms with their three players still on the roster eligible for arbitration. And just like that, the offseason became a little more drab. Not that there was much drama to be had anyway. All three: Cheslor Cuthbert, Brian Flynn and Jesse Hahn […]