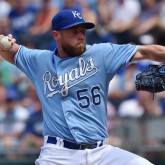 It’s pretty clear that even though the Royals aren’t likely to spend much money that they’ll look to reinforce a bullpen that had way too many leaks in it. Actually that’s not a very fair characterization. A leak implies there were just some holes. It was way worse than that. And so, as the Royals […]