When Billy Butler departed as a free agent after the 2014 season, the Kansas City Royals had some options. They had talked openly about preferring to utilize the designated hitter role to be more of a rotation for position players to get a half-day off, so that seemed likely. There were also some free agents out there who could fit in that spot for them, at least some of the time. Ultimately, though, they ended up giving a two-year deal to Kendrys Morales that was fairly heavily panned at the time.

The Royals were betting on his 2014 season being a product of having no spring training, and the more I looked into it, the more sense it made that was the case. That season, he saw his line drive percentage drop to the lowest point of his career as a regular, which led to a BABIP that was significantly lower than any point in his career. He took more pitches inside the strike zone and swung at more pitches outside the strike zone. I still haven’t figured out exactly the correlation here, but he also made an odd amount of contact on a pitch outside the strike zone in 2014.

It all added up to timing issues, which makes sense given the circumstances surrounding his 2014 season.

In spite of that, I didn’t expect the season he put up in 2015. He posted a 2.3 WARP, which was the second best of his career and a .294 TAv that was right in line with the best years of his career. If you throw away his 2009 MVP-type season, you could make a pretty compelling argument that 2015 was actually the best season of his career.

The presence of Morales is what made the Royals lineup work so well last season. There’s a lot of talk about how deep the Royals lineup is, and while it is far deeper than it was prior to 2014, it’s not quite as deep as people think. They have a hole at the top of the order and two or three holes at the bottom. As a side point, the reason it could be three holes at the bottom of the lineup is if Salvador Perez’s increased power isn’t actually for real. He has offensive value due to his power, but if he drops back to a 13 home run guy, he could be a real problem.

Anyway, the Royals lineup is more shallow than many want you to believe, but it works, and I believe it works because of Morales. If that continues in 2016 will depend on a lot of things, some Morales can control, which I’ll get to later. First, let’s discuss why he makes it work.

He’s a switch hitter. A lot of people tend to scoff at the idea of alternating left-handed hitters and right-handed hitters in a lineup, but it actually makes a lot of sense in this era of bullpen specialization. To be able to force a manager to make a decision every batter (if possible) once he gets to his relievers is a great tool to have.

The Royals lineup is one that seems more balanced than it is. Of the Royals best hitters, three are lefties (Mike Moustakas, Eric Hosmer, Alex Gordon) while just one bats from the right side (Lorenzo Cain). Having a switch hitter to slot in between two of the lefties is a huge benefit. It certainly helps that he was really good against lefties last season, which hasn’t always been the case. He hit .298/.359/.412 against southpaws in 2015, compared to his career rates of .268/.319/.415.

Morales also adds that consistent power bat that the Royals haven’t always had. Even in his terrible 2014, he posted a .141 ISO (slugging percentage minus batting average) once he got out of Minnesota. Averaging his four non-outlier seasons, he has a .189 ISO, which is in line with what he posted in 2015. He’s a good bet to continue hitting for power.

But what made him so great in 2015, and is so vital to him being a similar player in 2016, is his patience. You saw it in the raw numbers. He set a career-high in walks last year with 58, which is nine more than he’d ever had before. You also saw it in the rates. He swung at just 30.8 percent of pitches outside the strike zone compared with 32.8 percent the three years prior.

Pitch selection is important for every hitter, but take a look at how important it is for Morales.

Here’s his slugging percentage by zone: 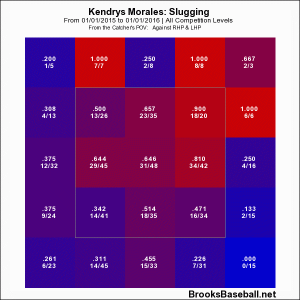 And here’s his ISO by zone: 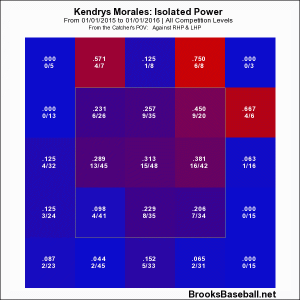 If you’re a pitcher and you’re able to get Morales to go outside the zone, you have a pretty good chance of keeping him from hitting for power. While it’s interesting that his patience spiked in 2015, it’s not out of the realm of possibility that he’s established a new normal. PECOTA doesn’t seem to think it’s that likely, with a .264/.323/.426 projection and 7.4% walk rate, but it’s worth noting that Morales actually improved his plate discipline in the final two months of the season with a 13.3% walk rate.

So maybe Morales doesn’t follow up a near career season at age-32 with another one at age-33, but I do think the approach change is real. And I think when you put up him in the fifth spot of the Royals lineup, you take a group of players that might struggle to score runs and give them a chance to give pitchers trouble for five straight spots in the batting order.

There’s no guarantee that Moustakas continues to hit like he did in 2015 or that Cain and Hosmer build on what they accomplished or that Alex Gordon doesn’t find himself beginning his career decline. But I can pretty nearly guarantee that the Royals lineup will go as far as Morales will take them. He serves as the balance. He serves as the muscle. He even serves as the patience. Not too shabby for a guy many wouldn’t have even considered signing at all, let alone to a two-year deal before last season.

Tags: Alex Gordon, Billy Butler, Eric Hosmer, Kendrys Morales, Lorenzo Cain, Mike Moustakas |
David Lesky
Follow @dblesky
I've been a Royals fan since the day I was born, and have had the opportunity to write about the Royals for nearly a decade now. The winning was better than the losing, but the losing is kind of familiar at least.
read more from David Lesky