Five games into the season, four wins for the Royals, and several little things are making me sit up and take notice. The starting pitching has been top notch, of course. The comebacks have been fun. The bullpen has been lights out as expected.

How about this little tidbit: Mike Moustakas has been destroying the ball.

“Hyperbole!” you say. After all, he has just five hits in 20 at bats. If he’s crushing pitches, shouldn’t his batting average be higher?

We’ll get to that in a moment. In the meantime, it’s true he’s been putting the hurt on baseballs. Moustakas has put 12 measurable balls in play so far this season with an average launch speed of 99.68 mph. According to Statcast the league average launch speed is a tick over 90 mph. We’re dealing with small sample sizes here in the first week, but a little perspective can help. The ball is jumping off Moustakas’s bat.

Let’s examine the home runs. The Moustakas round tripper off Ricky Nolasco on Sunday left the bat at an astonishing 111 mph according to Statcast. Along with a launch angle of 24 degrees, it was pretty much a perfect home run. And it was a no-doubter from the second bat met ball.

The ball splashed in the fountains, an estimated 428 feet from home plate. That’s a monster blast.

It was his second home run of the season. The first came on Saturday night, a laser deposited into the Twins bullpen. Statcast had that shot measured at 108 mph. It was more of a line drive, so the launch angle wasn’t near as elevated as the Sunday home run. Measured at 19 degrees, a little more backspin was required on that one to carry it over the fence.

There was a lot of noise when bat connected with ball. The position of the pitch, down off the zone and just to the inside part of the middle of the plate, looked like a quality offering from Tommy Milone. 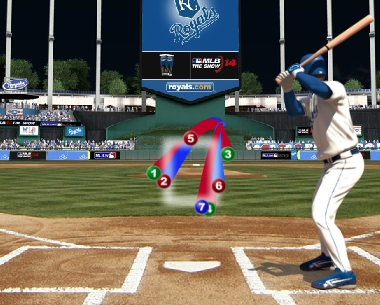 That’s a pretty decent pitch sequence where Milone was varying locations. The sixth pitch in the sequence was a change on the inner half that Moustakas was all over, but yanked foul. The next pitch was down, but it’s in a location Moustakas can punish. 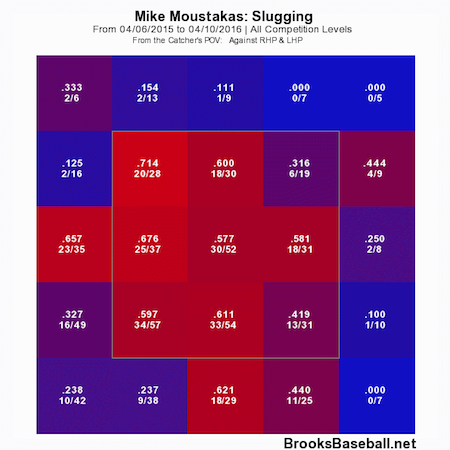 Moustakas’s slugging percentage broken down by pitch zone over the last season-plus is fascinating. The higher slugging percentage on the outer half indicates his opposite field approach and the uptick in doubles he saw last year. The hot spots in the heart of the zone are probably pitches he pulled for home runs (and doubles.) And he does like to go down, reach for the three iron as Uncle Hud notes, and golf one over the fence.

The question everyone is asking at this early stage in the season, is Moustakas going the other way like he did last year? The answer is an unequivocal: Sort of. 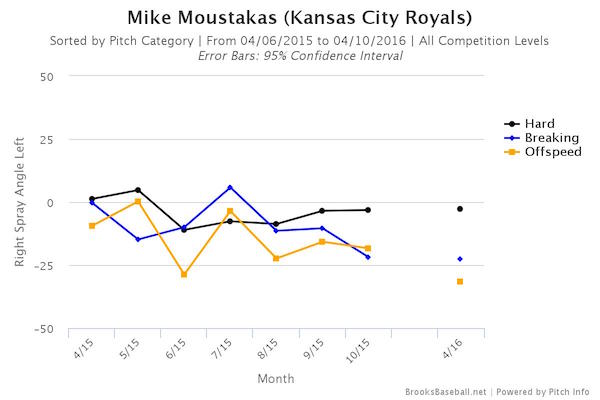 He’s yanking the offspeed and breaking stuff, but is going up the middle with the heaters. You see from April and May last year, his average spray angle leaned to the left before moving back to the other side of the field. That follows our eye test where it seemed like Moustakas stopped going the opposite way after his early successes. He recovered after June and gradually built back to where he was going to almost equal parts to left and right by the end of the year. That’s where he is right now on the fastballs, which feels like a good place for Moustakas.

The placement of his hits is going to continue to be worth watching, but it’s what Moustakas is doing when bat meets ball that has me interested. He’s crushing fastballs. 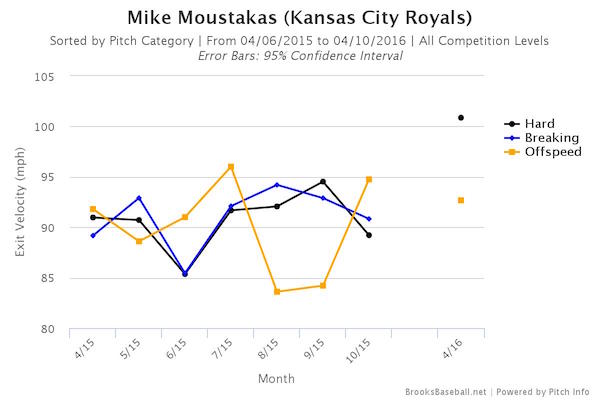 I realize this is the first week of the season, and we’re talking about a hitter who by his own nature is streaky as hell. Still, you have to sit up and take notice, particularly for a hitter like Moustakas. Last season, he rode that opposite field approach at the beginning of the year to the best offensive season of his career. Was he the same hitter in August as he was in April? No, but I’m not sure that mattered so much. Moustakas had a history of slow starts which seemed to impede his confidence, which seemed to snowball into larger issues. Last year, he dinked a few hits to left and decided maybe he could do this hitting thing. Voila.

This year, he’s not going the opposite way as much, but damn he’s hitting the ball with authority. His .250 batting average and .214 BABIP says he’s hitting into some poor luck as far as singles, but if he keeps stinging the ball, the hits will fall. Last year, he hit .458 when his exit velocity topped 90 mph. Remember, his average exit velocity right now is above 99 mph. It’s crazy his average isn’t higher at this point.

As noted, Moustakas is a streaky hitter, so I’m hesitant to get too carried away, but this feels similar to his start at the plate in 2015 as far as kickstarting his confidence. After watching him crush the ball for the first five games, it’s not a stretch to think he could go on an extended roll. If he can keep stinging the ball, this will finally be the year he unleashes his full power potential and hits close to 30 bombs.

Moose looks extremely comfortable at the plate – and you’re right, he’s extremely streaky. However, when he’s struggling, there are lots of weak 6-hoppers and pop-ups to short.

This looks promising (so far).