The Royals backstop is tearing through the American League and continued his punishing of opposing pitchers, driving in three runs on another home run and a double. It seems like for the first time in his career, he’s the one carrying the Royals through some lean offensive times. Mercy.

This is where we are with Hot Sal. In the seventh with runners on first and second, Perez watched the first two pitches go by before looking at a called strike. We’ve actually seen this approach from Perez before. He’s patient before he’s not, if that makes any sense. Oftentimes, late in a game he will take pitches until he sees a strike. In the past, that’s when it all goes to hell. This… This is different.

The 2-1 pitch was a slider down and Perez went fishing. At 2-2 you know another slider is coming. Except this one was too far off the plate to entice even Perez. At 3-2, you’re thinking to yourself he’s going to see another slider and he’s swinging here no matter what. The old Perez would swing and miss. Hot Sal? He slows his bat down, reaches out, and drives the ball to the right-center gap for a two run double. 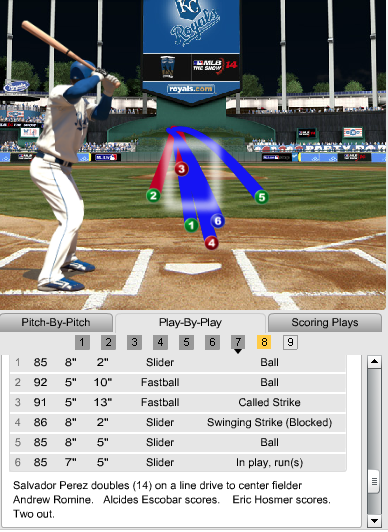 I mean, it was a fantastic piece of hitting. OK, maybe the slider wasn’t far enough off the plate and Perez didn’t have to reach too far to barrel it. Whatever. The point is, that’s a pitch that has gotten him out with increasing frequency over the last couple of seasons. Not now. Not with Hot Sal at the plate.

Earlier in the game, Detroit starter Micheal Fulmer had a 33.1 inning scoreless streak. He’s been pitching really well for the Tigers. He kept the Royals at bay for most of the first five innings, allowing just three singles and a double. He retired the first two Royals in the bottom of the sixth. Then, Hot Sal stepped to the plate.

Fulmer hung a slider. The way Hot Sal is swinging the bat, it was over the moment the pitch left Fulmer’s hand. The ball was on a plane of destruction. The only question was whether or not it would leave a dent in the Hall of Fame in left field.

That was a massive moment in this game as both starters were going toe to toe and throwing zeros to that point.

And that’s how I pivot to this…

Yordano, Thrower Of Fire And Other Flame-Like Substances

So sense that ejection, Yordano Ventura has been masterful. In his last two starts he’s thrown 13.1 innings, allowed 11 hits, and whiffed 15. Now here’s the important part. In fact, it’s so important, I’m turning to the italics to make the point. Ready?

In his last two starts he’s allowed just one walk. One.

This is the starter who, through his first nine starts had a 6.1 BB/9. Through his first 48 innings, he had struck out just one more batter than he had walked. A 34:33 SO/BB ratio. What’s wrong with Ventura? That was a completely fair question. A rough patch is one thing. This was abysmal. Slowly, though, he’s worked his way out of it. In his 10th start of the season, Ventura went seven against the White Sox and didn’t walk any. So since that start, he’s thrown 30.2 innings, and walked just three. That’s a 0.9 BB/9. Quite the turnaround. Oh, and he’s whiffed 25.

On Friday, he didn’t retire the side in order until the fifth, but was able to dance around any potential potholes. He’s throwing with a confidence we didn’t see in the season’s first two months. He touched 100 with his two-seamer and hit 101 mph with the four-seam fastball. The heater set up the curve and change. Ventura threw 39 off-speed pitches and got eight swinging strikes. That’s a decent ratio. It’s a far cry from the Ventura who was throwing in the low 90s with a “get me over” fastball earlier in the year. He’s a completely different pitcher.

There was a lot to like in this game. It will probably be forgotten in the aftermath of the blowout, but Kelvin Herrera came up huge protecting a one run lead in the seventh. Two errors put runners at first and second but Herrera found a couple of ground ball outs (more on one in a moment) to keep the Tigers off the board.

Another tip of the cap goes to the Royals defense. Despite the errors in the seventh there were a couple of nice double plays turned up the middle, started on both sides of the bag. Alcides Escobar made a nice stab and spin throw to get Ian Kinsler in the sixth. Brett Eibner made a nice catch in the third.

But the play of the game was Whit Merrifield’s diving stab of a ground ball up the middle in the seventh. (One of the aforementioned ground balls hit off Herrera.) Again, so huge in the moment because if it gets up the middle, the Tigers are going to tie the game. Instead, Merrifield goes full extension and is able to flip the ball to Escobar covering second.

The fun part came after the Royals chased Fulmer and they were able to repay the favor from last night and abuse the Detroit bullpen. Kansas City tacked on six more runs, including the aforementioned two-run Hot Sal double.

If you’re looking for a hitting star, non Perez division, how about Kendrys Morales. Five plate appearances, five times on base with a single, three walks and a three-run bomb to account for the final Royals runs of the evening.

It’s like someone put all the Mentos in the Royals Diet Coke.

Tags: Salvador Perez, Yordano Ventura |
Craig Brown
Follow @CraigBrown_BP
Craig has been covering the Royals at various outlets for 14 years. His work has appeared at various websites, including Sports On Earth, Baseball Prospectus, ESPN, The Hardball Times, and SB Nation. Reach him at craig.brown@baseballprospectus.com.
read more from Craig Brown