With their starting pitchers impersonating victims from a Law and Order episode the last two games, the Royals desperately needed length from Sunday’s starter, Ian Kennedy. Kennedy not only gave the Royals seven innings, he allowed just three hits and one walk on the afternoon. After the run-scoring barrage from the Houston bats the previous two contests, it was a relief that just one Astro managed to come around to score.

Kennedy Back To Form

In his previous start, Kennedy spun just four curveballs. Preliminary data from Brooks Baseball suggests he threw 22 of them on Sunday. It’s a pitch that can get hammered (a 371 ISO against this year), but it also serves to set up his fastball. It was the balance of pitches that helped him to a season-high 11 strikeouts and one short of his career high.

Also, and this goes without saying, location was key for Kennedy. Home runs have been flying out of the park against him this year, but on Sunday Kennedy was able to vary his location just enough to avoid trouble. 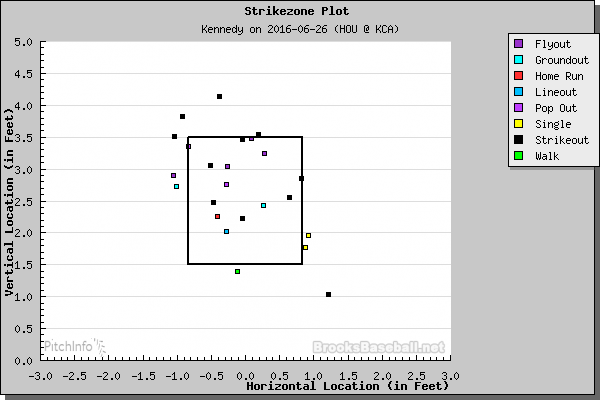 The singles were good pitches, just outside the zone. The fly outs were elevated just enough hitters couldn’t square up. And the strikeouts were what he was able to do so well early in the season and that was getting swings and misses in the zone. This was April Kennedy. Good.

Kendrys Morales has hit .390/.468/.732 since June 11. He bopped a pair of home runs from the left side of the plate in this one, putting the Royals in the lead in both instances. The resurgence of Morales is going to be massive for this team as they roll into the All-Star break. They were able to keep pace for the most part in the Central despite his black hole of a bat in the middle of the order for much of the first two months. Now that it seems he’s finally on track, this offense can start firing on all cylinders.

This is especially important now that Alex Gordon has returned to the lineup after a shorter than expected absence. Ned Yost has slotted Gordon second in the order, which is something we’ve been clamoring for in our corner of the internet for the last couple of seasons. The intended side effect of Gordon second is that it knocks Alcides Escobar to the bottom third of the order where he’s always belonged. Spare me the Royals Devil Magic. Certainly, the Royals won with Escobar at the top of the order, but this is baseball which means that regression was always going to expose this for what it always was – a misguided idea.

As mentioned, Kennedy allowed just one home runs which means the Royals pitchers have now coughed up 46 home runs this June. The Royals record for most home runs allowed in a month is 51, set in May of 2006. You remember those Royals, right? Joe Mays. Scott Elarton. Mark Redman. Yeah, those Royals were what you scrape off your shoe when you get home from an afternoon at the off-leash dog park.

The 2016 Royals, recent struggles aside are no where in the same area code as the 2006 Royals, are threatening the record. Four games remain this month with the Cardinals. Two in Kansas City and two on the other side of the state. Five home runs to tie. The Watch has officially been activated.

The Cardinals come to Kansas City in the first of four games of a trumped-up interleague rivalry.

Tags: Ian Kennedy, Kendrys Morales |
Craig Brown
Follow @CraigBrown_BP
Craig has been covering the Royals at various outlets for 14 years. His work has appeared at various websites, including Sports On Earth, Baseball Prospectus, ESPN, The Hardball Times, and SB Nation. Reach him at craig.brown@baseballprospectus.com.
read more from Craig Brown