An unsung bright spot for the Royals this year has been the offense of Paulo Orlando. Remember, at the start of the season it looked like Orlando would be sharing right field with Reymond Fuentes and then, after he returned from a spring training injury, Jarrod Dyson. In fact, Orlando didn’t start on Opening Day and didn’t play in the team’s first three games. Yet here we are approaching the midpoint of the season and Orlando’s .361/.389/.470 line (entering play on Sunday) is good for the team lead in batting average, on-base percentage (thanks to that high batting average, because like practically every other Royal, he doesn’t walk), and is third among position players on the team in WARP. That is despite playing in many fewer games than the leaders, Lorenzo Cain and Salvador Perez.

Orlando made his major league debut last year as a 29-year-old rookie, and posted a .249/.269/.444 line. That was perfectly fine for a reserve outfielder. He showed some speed (six triples) and some pop (seven home runs). But no one could have imagined this year’s success.

So what has changed for Orlando?

How about a freakishly high BABIP? Like .461. Orlando has good speed, so you might expect him to have a little higher BABIP than the usual .300-ish. He might pick up a few extra infield singles. But a BABIP that high seems unsustainable, unfortunately. Especially when you consider that Orlando’s walk rate, a miniscule 2% last year, has jumped all the way to…2.8% this year. Like his walk rate, his strikeout rate is very similar to last year’s. His line-drive percentage is practically the same.

I am encouraged by Orlando’s increased willingness to hit the ball the other way, too. Last year, he really was a spray hitter; he hit the ball almost equally to left, center, and right field. That might not have been the best approach, because as you can see here, teams liked to pitch to him down and away, and also down and in a little bit. 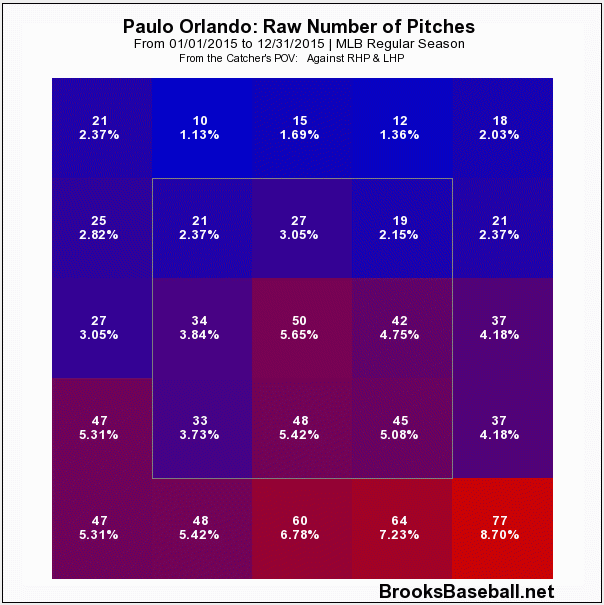 But Orlando last year showed a little power on those inside pitches. Consider this chart of his slugging percentage last season: 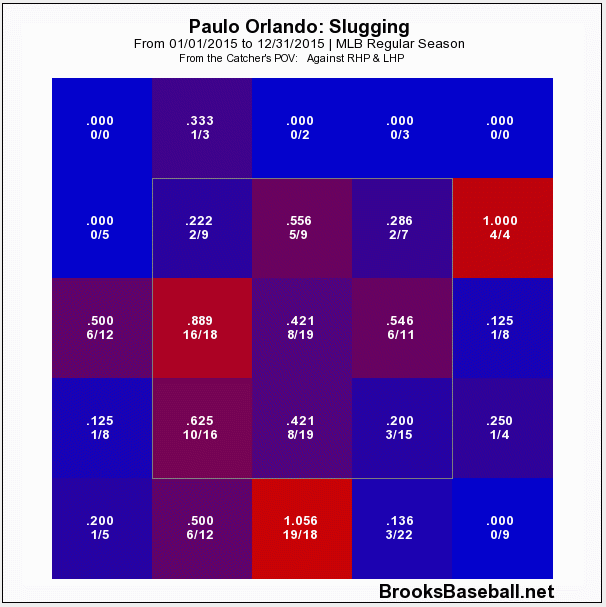 Amazingly, he had more success on the inner third of the plate than he did on stuff over the middle. But notice that he did poorly on pitches down and away.

Now, look at how teams are pitching to him this year: 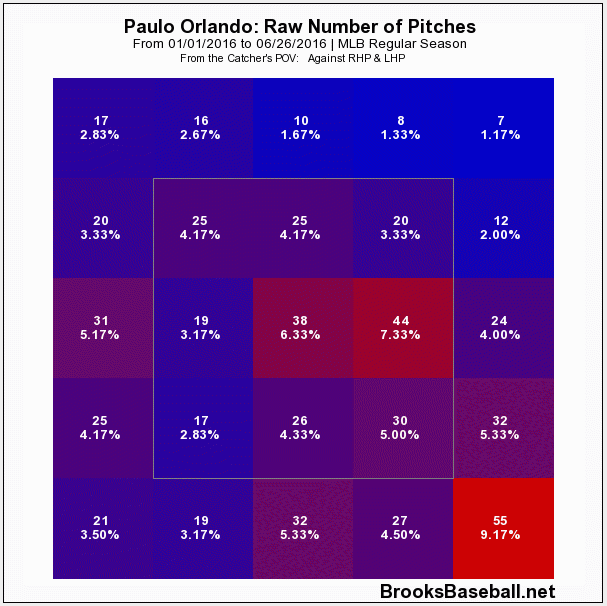 There is a pretty good concentration of pitches low and away, while teams stay away from that inner third of the plate.

But how is he handling them this season? Glad you asked. 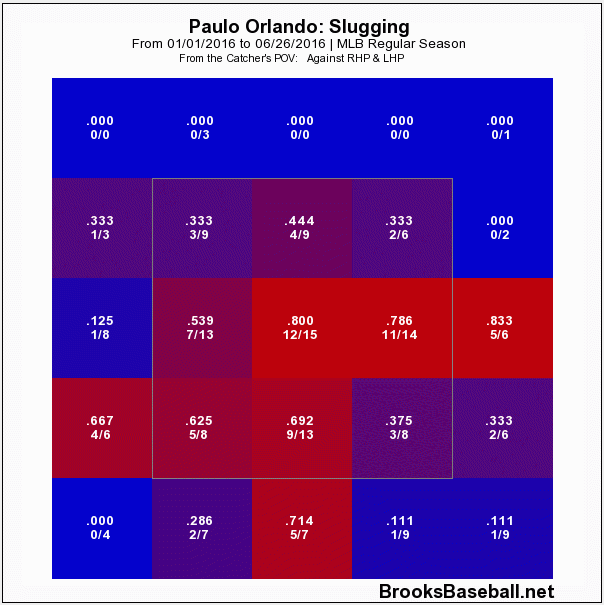 Yep, still doing well on the inner third, but he’s also adjusted and is hitting better on pitches low and away.

At first, Orlando’s drop in power seems discouraging. Entering Sunday, he had 60 hits on the season, same as he collected all of last year. Yet in 2015, almost half of his hits (27) were good for extra bases. This year, only 13 have been. Yep, 47 singles. But if he’s seeing mostly pitches down and away, it makes sense. Rather than try to pull those, he seems to be content to go to right field more often.

His spray charts bear that out. Here are last year’s, first with batted ball type and then with outcome. 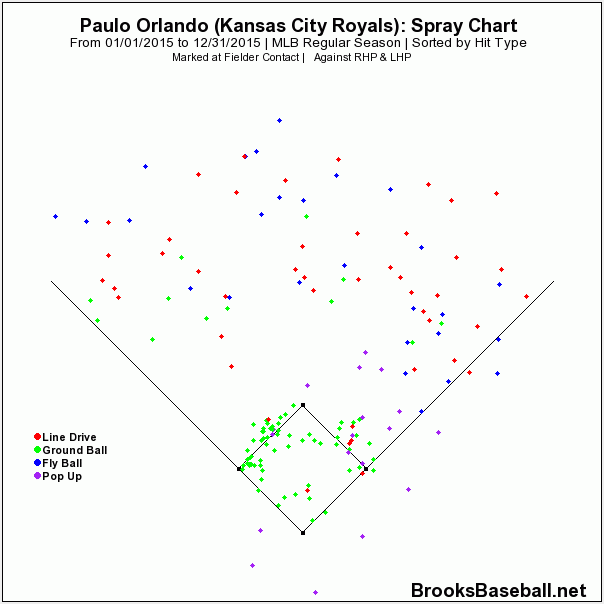 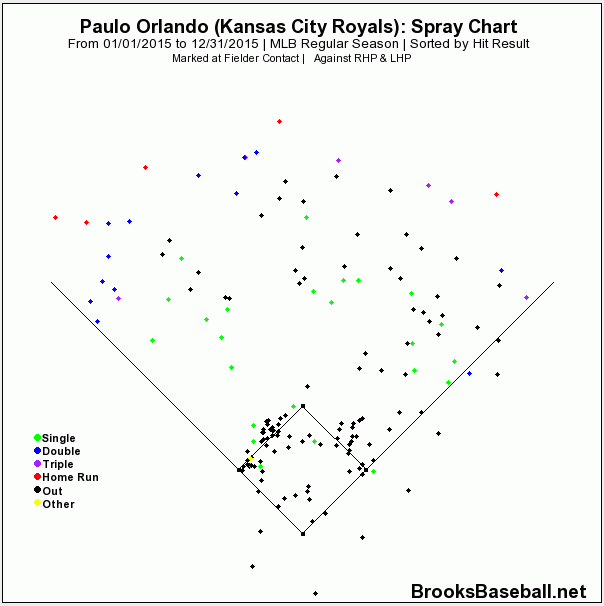 I’m struck by two things: all the grounders to shortstop and third, and the doubles hit down the left-field line.

Now compare those to the same charts for this year: 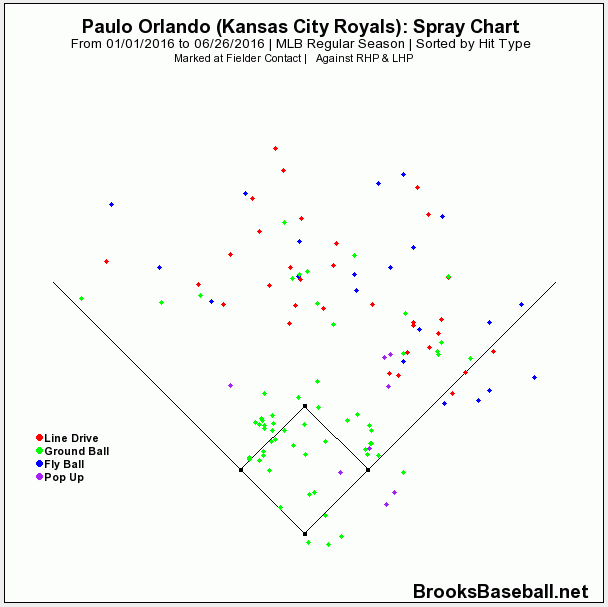 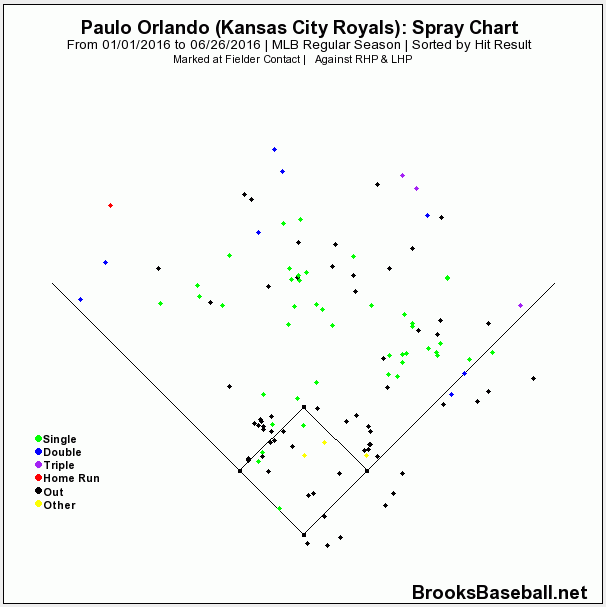 Still some grounders to shortstop, but a lot more up the middle and towards the right side. I also notice the number of balls hit to short right, center, and right-center field. According to Baseball Savant, Orlando’s average exit velocity on batted balls has dropped a bit, from 88.8 mph last year to 88.0 this year.

It almost seems like a planned approach, doesn’t it? Seeing more pitches away, Orlando has adjusted by perhaps swinging a little softer, guiding the ball to center or right field. He’s sacrificing power for average, which seems like a good tradeoff for a speed guy to me. The Royals don’t need Orlando to hit home runs, although those are always nice. For a team built on contact, Orlando is carrying out the game plan to near perfection right now.

I doubt his high BABIP is sustainable. Teams will adjust to what Orlando is apparently trying to do. However, I do find it encouraging that he has already shown this ability to adapt. Normally, you would not expect a 30-year-old player to improve. But I do wonder if Orlando’s late start in baseball (not a big sport in his native Brazil, plus the fact he was a track star before focusing on baseball) could mean he is a late bloomer who still had room to improve.

At the beginning of this season, right field looked like a big question mark for the Royals. Thanks to Orlando’s adjustment, that problem has been solved for the first half of the year at least.

Tags: paulo orlando |
Darin Watson
Follow @@Darin_Watson
I grew up in Topeka, and learned to love the Royals over many summer nights listening to Denny Matthews and Fred White. Of course, the Royals were easy to love back then. They got their claws in me over 30 years ago, then they went to the playoffs in 1984 and won it all in 1985. And I thought to myself, "This is easy. This team is always going to be good!" Sigh. But now that they are good again, I'll be sure not to take it for granted. I promise. I'm also a fan of the Chiefs, Jayhawks (yes, even the football team), Sporting KC, and the Nashville Predators. By day, I'm a mild-mannered project manager for a publishing company, and every night I'm lucky to come home to my amazing wife Michelle. We've been married since 2005 and live in Overland Park. Fun fact, she grew up in Memphis watching many future Royals when Kansas City's AA team was there. So it didn't take much to make a Royals fan out of her. We don't have kids, but we've got three cats (including one named after Alex Gordon), and a dog.
read more from Darin Watson