This one started in a familiar way. Twins starter Tyler Duffey, the Duffey with the 5.79 ERA and 11.0 H/9 entering the game, retired the first 10 Royals he faced. I can’t say for certain, but I’d be willing to be that that was the first time all season Duffey got 10 consecutive outs. At any rate, this game vibed similar to what we saw on Wednesday in Detroit.

Except this time, the Royals jumped just a little earlier.

Single, walk, fielder’s choice, walk and the bases were loaded. Suddenly, Duffey couldn’t locate. Suddenly, the Royals, the team with the 6.1 percent walk rate, found patience. Duffey’s location was tested once again and he drilled Salvador Perez on a pitch dangerously up and in to plate the first run. The next runs? Let’s just say they were grand.

Gordon has always been aggressive at the plate. It seems that on the latest road trip he got especially aggressive once he can work the count into his favor. That was on display in his plate appearance in the fourth. Jumping ahead 2-0, he got a fastball on the outer half at 91 mph and was way out in front, roping it into the seats down the right field line. Then, with the count 3-1, knowing Duffey would have to deliver a strike, Gordon was ready and jumped all over a fat middle-middle four-seamer. 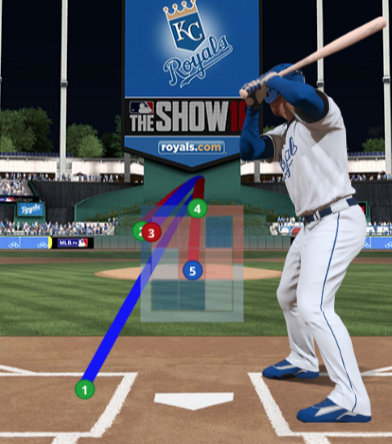 Duffey took a little off that one to ease it over the plate and he really paid the price. Gordon launched it at 101.7 mph and it traveled 421 glorious feet.

Lefebvre and Uncle Hud were signing the praises of Eric Hosmer for legging out the fielder’s choice two batters before Gordon. I’ll add my kudos to the chorus. Hosmer, after looking like he could be at least getting lukewarm with the bat in Detroit, went back to rolling over on Thursday. This was a big chance for the Royals and when he chopped back to Duffey, Hosmer broke quickly out of the box and hustled down the line to beat the throw. That was a key moment in the inning.

Death, Taxes, And One Run From The Starting Pitcher

Another game, another stellar pitching performance from a starter. Thursday, it was Dillon Gee’s turn.

Gee’s breaking ball was on point. According to preliminary Brooks Baseball data, Gee delivered 22 cutters, 13 of them for strikes. He also fluttered 17 knuckle curves, 12 of those for strikes. The Twins could do little against either, putting six of those combined in play, none of them falling in for hits. The key was keeping them down in the zone, so Twins batters couldn’t barrel those offerings. 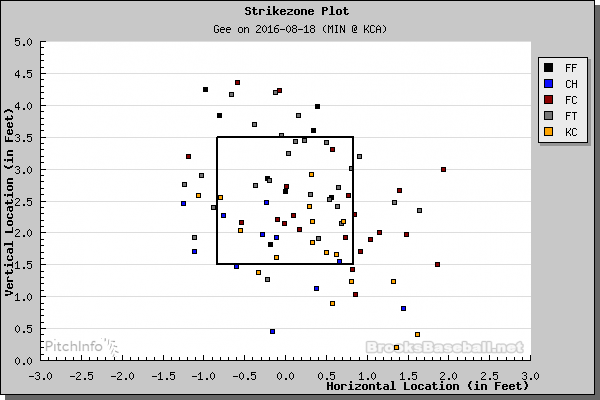 The Royals fifth starter role has been a struggle all season. In a key series against a beatable opponent, Gee delivered. What a game.

Yeah, it’s official. We’re on the Watch. With the victory Thursday, the Royals have moved into a tie with the Astros and closed to within a half game of the Yankees. Winners of 10 of their last 12, they are 6.5 games out of the last spot with four teams ahead of them.

The second game of the brief four game homestand features Edinson Volquez trying to join the one run conga line forming in the Royals rotation. First pitch is 7:15.

Tags: Alex Gordon, Dillon Gee |
Craig Brown
Follow @CraigBrown_BP
Craig has been covering the Royals at various outlets for 14 years. His work has appeared at various websites, including Sports On Earth, Baseball Prospectus, ESPN, The Hardball Times, and SB Nation. Reach him at craig.brown@baseballprospectus.com.
read more from Craig Brown