Back at the All-Star break, I took a look at each American League playoff contenders’ strength of schedule the rest of the way. For a long time there, I didn’t expect to be updating it this year, but here we are. In one week, the Royals have gone from “let’s see what the prospects can do” to the thick of the wild-card race. After Sunday’s games, the Royals find themselves just 3.5 games out of a playoff spot with 38 games left on their schedule. That is absolutely doable. It may not be likely, but it’s at least a possibility. Given everything that’s happened this season, I’ll take it.

Our own Clark Fosler provided the road map to a playoff spot last week. But can the Royals actually pull it off?

The biggest boon to the Royals the rest of the way may simply be their schedule. Seven games against the fading Chicago White Sox, six against a Minnesota Twins team they just spanked over the weekend, and four games against a poor Oakland A’s team make up, uh, 17 of the last 38 games. The other 21 appear to be a little tougher: six each with Cleveland and Detroit, three each with Boston, Miami, and New York. Since the Royals are battling Boston, Detroit, and New York (among others) for position, those games are all huge.

The methodology remains the same: Multiply the number of times Team A plays Team B by Team B’s wins and losses. Add it up for Teams C, D, etc., and there you go. I also do this exercise using the concept of third-order wins from Baseball Prospectus. Third-order wins is somewhat like Pythagorean wins, except better in my opinion because it does give you a little better idea of a team’s true talent level. So let’s see what we’ve got.

In the division, I think the Royals can forget catching Cleveland. An eight-game lead with 38 games left (Cleveland has 40 left) is probably safe. Especially because the Indians will play Minnesota six times, Chicago seven times, and Oakland three times. If Cleveland just plays .500 the rest of the way, and 16 games against bad teams ought to help them do at least that, the Royals would need to go 27-11 just to catch them.

The other bad news is that Detroit, with a one-game advantage over the Royals, has an even softer schedule than Kansas City. The Tigers have 10 games left against the Twins. They also have three-game series against the last-place Los Angeles Angels and Atlanta Braves. The Royals and Tigers play six more games against each other; the Royals really need to win the majority of them to offset Detroit’s lead and schedule advantage.

It’s pretty amazing that four of the five AL East teams are still in the race. Toronto, Boston, and Baltimore are separated by 2.5 games, with New York 6.5 games out of first (and a half-game behind the Royals). The good news is that MLB really backloaded the schedule with divisional games; Toronto has 25 games left against AL East teams, while the other three have 29 or 30. Baltimore and New York, especially, have much tougher schedules the rest of the way than the Royals do. I wouldn’t be surprised if those two are around .500 the rest of the way, which leaves an opening for someone. Royals fans will definitely be cheering for Tampa Bay a lot over the next few weeks; the Rays play the other four teams in the AL East a combined 30 times. The Rays may not have a great record, but their peripheral numbers make them look better—they still have a better run differential than the Royals. Let’s hope they play like it.

Out west, with Texas fairly comfortably in first place, the Royals’ main worries are Seattle and Houston. Since both the Mariners and Astros each have 13 combined games against the A’s and Angels, they do have a bit of an advantage over the Royals. Of the two, Seattle seems to have a little easier road; Houston has three games against the Cubs, four against Cleveland, and three against Pittsburgh.

So what do the numbers say?

The Royals’ remaining opponents have a weighted winning percentage of .496, and a weighted third-order wins percentage of .500. Sounds pretty easy, right? Unfortunately, Detroit’s opponents come in at .487 in both categories. Seattle’s opponents are at .488/.470. At least the Royals have a chance to handle Detroit on their own. At the other end of the spectrum are Baltimore (.515/.547) and New York (.528/.548). The Orioles were already slipping a bit; their tough schedule the rest of the way may finish them off.

This chart shows each team’s remaining strength of schedule: 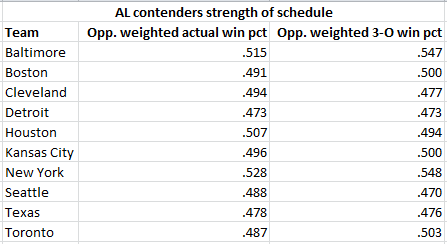 Using the log5 method created by Bill James, we can predict a team’s win percentage against their remaining schedule. I have done that for both a team’s actual win percentage and their third-order win percentage. This chart shows their expected win total  for both:

Before the angry emails start, I agree that both methods have predictive limitations. Take the Royals’ win totals there. Third-order wins see that the Royals have been outscored on the season and downgrade them (Kansas City’s .461 third-order win percentage is the lowest of any team that fashions themselves a contender). Actual win percentage is based on the play on the field, meaning it’s based on a Royals team that has been beset by injuries and season-long slumps. Once Wade Davis comes back, which should be in a couple of weeks, the Royals will be about as healthy as they can possibly be. And players who have struggled, like Alex Gordon, seem to be on the upswing.

And really, the most important thing is that the Royals have played well enough to make this conversation possible. The fact they played poorly in July doesn’t matter going forward in this race (well, it does in the sense that it put them in this hole). What really matters is that they continue to play well. The schedule appears to be set up for them to do that, but they might still need some help.