It was kind of the typical Yordano Ventura tightrope start. Through the first four innings, he retired the side in order only once. Dee Gordon touched him for a couple of hits, including a single with two outs in the third when Ventura ultimately loaded the bases. In the fourth, everything was hit back up the middle, but the fielder’s choices wiped out the singles.

Ventura got three consecutive outs in the fifth, but required 81 pitches to navigate the 15 outs. The Marlins had the best chances through the first five, though those were limited, but left six on base. That’s kind of been the pitching theme this last month with the Royals. They’re opening the door ever so slightly, before laughing and slamming it shut.

What was different for Ventura on Monday was the velocity. The unofficial data from Brooks Baseball has Ventura uncorking several pitches that touched triple digits on the gun, topping out at 101 mph. His average fastball was clocked at 99 mph. And he maintained his veto throughout his six innings. 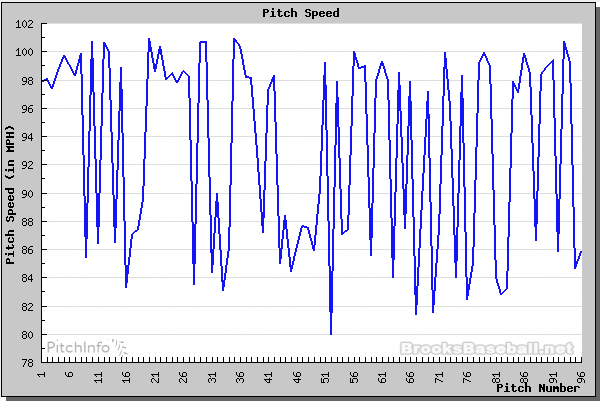 Six hits with six strikeouts on the night for Ventura. His second-half emergence is yet another storyline in this remarkable run.

If the Royals starting pitcher was doing the usual, so too was the offense. Dormant through five, they scratched out a run in the sixth. Paulo Orlando led off with a walk, stole second, and scored on a one-out Lorenzo Cain single. The only thing missing from this sequence was a productive out.

Cain picked up a pair of base knocks to continue his hot hitting. He owns a nine-game hitting streak and has 18 hits in his last 34 at bats.

The run-scoring single from Cain was worth 14 percent to the Royals Win Expectancy. In a game with so few key moments, it was the clear WPA Play of the Game.

Salvador Perez had a pop time of 1.7 seconds in throwing out Dee Gordon trying to steal in the sixth. The throw came out at 81 mph with an exchange time of 0.7 seconds.

Perez’s defense has been outstanding all year.

After Ventura exited following the sixth, the Royals bullpen did their thing. Matt Strahm picked up a pair of strikeouts. Joakim Soria worked around a leadoff walk. And Kelvin Herrera slammed the door to secure the shutout and the victory.

That’s now 32 consecutive scoreless innings for the Royals bullpen. In that stretch, they’ve allowed seven hits and seven walks. The last time they allowed a run was August 10.

Dillon Gee squares off against Jose Fernandez. Sure, that has the vibe of a mismatch, but why the hell would you bet against the Royals? Get your preview here. First pitch is at 6:10.

Tags: Lorenzo Cain, Yordano Ventura |
Craig Brown
Follow @CraigBrown_BP
Craig has been covering the Royals at various outlets for 14 years. His work has appeared at various websites, including Sports On Earth, Baseball Prospectus, ESPN, The Hardball Times, and SB Nation. Reach him at craig.brown@baseballprospectus.com.
read more from Craig Brown