Before I get into it, let’s take a look at the previous spring training questions we’ve discussed over the last few weeks:

Where Does Kyle Zimmer Fit?

How Do The Royals Stay Healthy?

And now, the latest…

Is The Pitching Good Enough?

I want to be optimistic about this team. I do. I look at the lineup as probably the deepest the Royals have had to open a season since Dayton Moore has been in Kansas City. I see a lockdown closer in Kelvin Herrera and a budding ace in the rotation in Danny Duffy. But there’s something holding me back. Even with Duffy and Herrera and even Matt Strahm, I just have a fear this pitching staff is going to hold the Royals back to the point that they not only don’t compete for the postseason, but end up trading off parts in July.

It’s not that I don’t think the rotation and bullpen have a chance to be good because they do. You don’t have to squint that hard to see Duffy take that next step. Ian Kennedy can give you his typical quality innings and get the job done. Jason Hammel has a 3.68 ERA in 91 games over the last three seasons. He clearly has it in him. Nate Karns has enough talent to give you quality innings (when he’s giving innings, of course, he doesn’t get deep into games). And Jason Vargas could be an excellent back of the rotation starter. He’s been pretty good as a Royal actually. So the talent is there.

The same is true in the bullpen. I’m not going to go through every possibility, but there’s some upside with guys like Joakim Soria and Chris Young bouncing back a bit from bad seasons and Strahm making an impact for the full season. So sure, they could absolutely not only be good enough, but they could be downright good.

But I’m just not sold. Not yet anyway. One of the reasons that I’m concerned is that this staff is still built around a lot of guys who give up a fair amount of fly balls. You remember all the talk last year of the juiced ball and home run rates and all that. I wrote about it somewhere around the All-Star break and said that the Royals might need to shift their targets on the pitching side to those who get more grounders. An elite defense in a suppressed run scoring environment makes fly ball pitchers underrated targets. When the defense is a little less elite and it’s a little easier to hit the ball out, that plan probably needs to change.

The issue, though, is plan didn’t really change. Five key members of the 2017 pitching staff all have fly ball rates of at least 40 percent since the start of 2011. Two others are above the average of roughly 35 percent, but they’re pretty close. That’s a lot of fly balls.

Two to four years ago, that made an awful lot of sense, as I mentioned above. The Royals had guys to go get those fly balls and the balls weren’t flying out of the park at the same rate as they did in 2016. Now, Lorenzo Cain is older. Alex Gordon is older. Jorge Soler is the right fielder, and the Royals themselves mentioned that they think he can be average in right field. If you’re working with Rusty Kuntz and the organization says they think a guy can be average, that’s probably not a good sign.

So let’s assume Gordon and Cain are both still the elite the defenders they were in the pennant winning seasons. I think they’re both still good enough that you don’t have to worry about them. But what about when one or both is not on the field? There isn’t a Jarrod Dyson to fill in and provide probably better defense than the starters. Sure, Paulo Orlando actually looked very good in center field last year, but I’ve never been impressed with his defense in the corners. And who is the fifth outfielder? It’s some combination of Whit Merrifield, Brandon Moss and Billy Burns. None profile as anything better than average defenders.

One area that gives me some solace in this pitching staff is that they seem to be able to get a popup. While a fly ball can easily drop between outfielders or, worse, over the fence, a popup is almost never a hit. Seven different Royals who are seemingly locks to make the 25-man roster do get themselves some popups.

The Royals with a better than 10 percent popup rate since 2011: 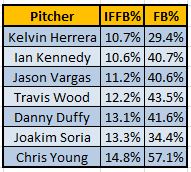 Is that a repeatable skill? I think aspects of it are. It’s interesting to me that Soria has a rate that’s very high considering the fact that he gets a fair amount of grounders and doesn’t allow a ton of fly balls. Most of the guys on the list above get a lot of fly balls, so it makes sense that hitters would just miss and end up popping up.

But there is good news. The 10 pitchers we’ve discussed posted a 23.7 percent strikeout rate last year. Obviously there are other pitchers in the equation who could bring this down, but that would have ranked fourth in baseball last year, ahead of the Indians pitching staff.  If you were wondering, their 8.1 percent walk rate would have been middle of the pack.

The answer to whether or not this pitching staff is good enough to win rests on a few underlying questions. Is the ball flying out of the yard in 2017 like it did in 2016? If it is, there could be more trouble. As far as what the pitching staff can actually control, if the core 10 can maintain their strikeout and walk rates from last season, it might not matter. That said, this crew has a career strikeout rate of 20 percent, so that may not be in the cards.

A history of not getting enough strikeouts coupled with fly ball tendencies in an environment that produced the highest home run per fly ball rate ever is scary, even in a big park like Kauffman Stadium. And it makes me wonder if they have enough pitching to get it done. I guess we’ll know soon enough.

Tags: Danny Duffy, Joakim Soria, Kelvin Herrera, Matt Strahm |
David Lesky
Follow @dblesky
I've been a Royals fan since the day I was born, and have had the opportunity to write about the Royals for nearly a decade now. The winning was better than the losing, but the losing is kind of familiar at least.
read more from David Lesky

1 comment on “Spring Training Questions: Can The Pitching Be Good Enough?”