The upper levels of the Royals organization appear to be strong in bullpen arms and players with the ability to leave the yard. Should the big club need bullpen help, then the route up and down Interstate I-29 could be active with pitchers Josh Staumont, Kevin McCarthy, Seth Maness and others available to Kansas City. Should the season head south, there are three or four players in Omaha that could be given auditions to prove their worth to the Royals in the coming seasons.

Omaha Storm Chasers
The winds of Werner Park could lead to an entertaining summer for Chaser fans with home run boppers Peter O’Brien, Ryan O’Hearn,  and Jorge Bonifacio on the roster, and with Hunter Dozier joining the squad later this season. On the pitching end, the Royals Triple-A squad features a stellar bullpen with a couple of talented arms backed by consistent and stable minor league veterans.

The Players to Watch – Despite a farm system that many prospect hounds believe is in the bottom third of all organizations, the Storm Chasers remain an intriguing team to watch at the Triple-A level. Much of that intrigue will come from the power that they will receive at the dish by Bonifacio, O’Brien, O’Hearn and Dozier will provide when Dozier comes off injured reserve. On the mound, fireballing Josh Staumont will give fans a reason to watch the radar gun.

The Surprise – It’s somewhat surprising to see Staumont push his way to Triple-A, but given his performance at the end of ’16 and in spring, I’m not all that shocked. The biggest move to Omaha for me was that of Corey Toups from Double-A NW Arkansas, despite a glut of infielders already on the roster. The infielder did hit 14 home runs and connect on 43 extra base hits in his 94 games at Double-A while also working extremely hard to improve his defense.

The Omission – No real shocker here other than Eric Skoglund, who had a solid season at Double-A last year. More of a numbers game than anything to do with Skoglund’s spring work, expect to see him in Omaha rather quickly. 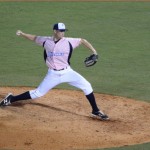 Rotation
Josh Staumont – ’15 2nd Rd pick, the move to Omaha hasn’t been good for Royals pitchers who struggle with control in the past.
Jake Junis* – ’11 29th rd, NW Arkansas pitcher of the year will continue to try to develop.
Luke Farrell* – ’13 6th rd pick, has outperformed stuff each of the last two seasons.
Jon Dziedzic* – ’13 13th rd pick, a lefty that has averaged 140 innings in the last three seasons.
Yender Caramo* – ’10 Intl signee Venezuela, has never been a big name but continues to perform his entire way up the ladder.
Bullpen
Scott Alexander* – ’10 6th rd pick, the lefty just missed making the big league squad.
Andrew Edwards* – 13 19th rd pick, hard-throwing righty who could challenge for a promotion in ’17.
Kevin McCarthy* – ’13 16th rd, sinkerballer returns after a September call-up in ’16.
Bobby Parnell – ’17 free agent has appeared in 335 major league games.
Al Alburquerque – ’17 free agent with 243 major league appearances.
Malcom Culver – ’08 6th rd, entered organization the same year as Eric Hosmer.
Eric Stout – ’14 13th rd, LOOGY who limited same-siders to just a .181 BAA in ’16.
Chris Withrow – ’17 free agent starts the year on DL, has appeared in 92 MLB games.
Seth Maness – ’17 free agent also on the DL, 244 MLB appearances.
Catchers
Cam Gallagher – ’11 2nd rd, has developed his defense to command the game and is nearly ready to be a big league backup.
Brayan Pena – ’17 free agent, last played in Omaha during the 2009 season.
Infield
Ryan O’Hearn 1b – ’14 8th rd, powerful first baseman has 62 home runs since joining the org.
Whit Merrifield 2b – has to be asking what he has to do to stay in Kansas City.
Corey Toups 2b – ’14 15th rd, 60 extra-base hits in ’16 between regular season and playoffs.
Ramon Torres SS – ’09 Intl FA DR, Torres had a good summer and spring.
Dean Anna IF – ’17 free agent, joins his fifth different org in an attempt to get back to the bigs.
Garin Cecchini – ’17 free agent, former Top 100 prospect.
Outfield
Jorge Bonifacio – ’10 Intl FA DR, can he build on a very good spring?
Bubba Starling – ’11 1st rd pick, is the 2015 Bubba in there?
Peter O’Brien – ’17 acquired in a trade for Sam Lewis w/ Arizona. How many Werner home runs can he hit?
Billy Burns – acq. in trade w/ Oakland for Brett Eibner.

NW Arkansas Naturals
What the Naturals lack in offensive talent they make up with in pitching talent in Kyle Zimmer, Miguel Almonte, Eric Skoglund and Corey Ray. At the dish, returnees Samir Duenez, Frank Schwindel, and Alfredo Escalera will have to do the heavy lifting along with newcomer Donald Dewees if manager Vance Wilson wants to carry the squad back to the championship round.

Players to Watch – The big one watch is Zimmer in his return to the bump. Will he be able to find his old velocity or is he a different pitcher than what he was? Can he hold up for a full season or is he now a bullpen piece? Plenty of questions for the former 5th overall pick in the 2012 draft. Besides Zimmer, the most intriguing players are still just 20 years old Samir Duenez and newly acquired centerfielder Donnie Dewees.

The Surprise – No big surprises here. Previously, I thought that Dewees would start back in Wilmington after just 35 games at High-A, but given his age, it’s not a shocker. The biggest surprise is the return of Eric Skoglund to Double-A, but I would imagine he could be in Omaha prior to the end of April.

The Omission – The only notable omissions are that of Elier Hernandez and Brandon Downes being unable to push their way to Double-A.

*Returning to level from ’16