With the transition from PITCHF/x to Trackman on collecting pitching data at all 30 ballparks, the early returns are the velocities are up a tick across the board. This is largely due to the method (meaning the timing of when the ball is picked up by the radar gun out of the hand of the pitcher) of collecting the data. It’s an interesting adjustment, and a reminder that it can be difficult to measure variables such as velocity from season to season. Pitchers change, be it through a mechanical adjustment or something as simple as age. Technology changes, too.

With that out of the way, one of the best things about the return of regular season baseball, is the data that comes along with it. Jeff Zimmerman has done a ton of quality work on pitchers and velocity and injuries. He’s also a Royals fan. He sent out a tweet on Tuesday afternoon regarding Duffy’s start on Opening Day against the Twins.

The data from Brooks Baseball confirms this trend.

There can be any number of explanations for Duffy’s apparent decline in velocity. It was his first start of the season, after he was dialed in for the World Baseball Classic. Perhaps he’s dialing it back a notch to deal with what was an accelerated spring training. Perhaps he’s just pacing himself for a target innings mark that represents a career high. Perhaps the guns aren’t properly calibrated to measure the ball leaving his hand this early in the season. Or maybe Duffy just couldn’t get properly loose. Hell, it could be none of these or it could even be a combination of more than one.

In other words, it’s far too early to sound the alarm bell over a drop in velocity. Although based on Duffy’s injury history and the obvious trends from both velocity charts above, this is a development that bears watching. Maybe there’s nothing there and maybe Duffy’s velocity levels off in the rest of April. Whatever is happening – and there’s a chance that it’s absolutely nothing – Duffy’s fastball velocity is something that bears monitoring over the next few starts.

One thing we do know from Duffy’s first start of the year, was he was at times brilliantly effective. The changeup was a quality pitch, generating a swing and a miss on over a quarter of the time. It was also the pitch that he kept in the zone the most, getting a strike on nearly 70 percent of all changeups thrown. It had about 8 to 9 mph of separation from his fastball, and with a 10 inch horizontal break, it’s not surprising that with his ability to locate, the Twins hitters had fits against that pitch. 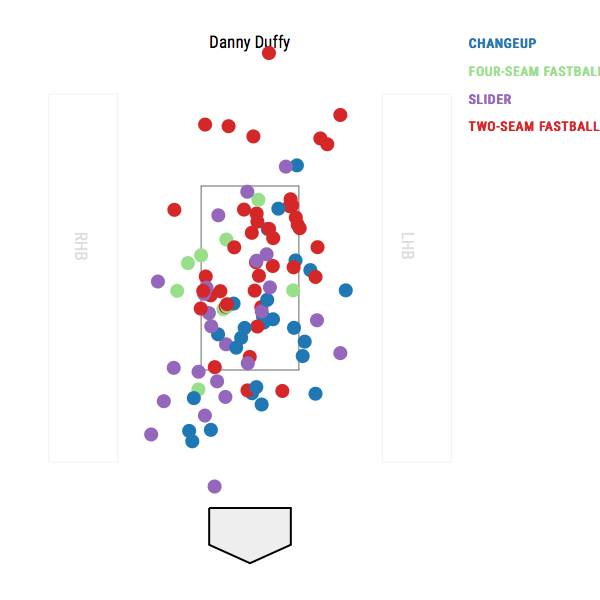 Basically, the high fastball set up the low change. The changing of the batter’s eye level and the separation of velocity between fastballs and change set Duffy up for an afternoon where he would strikeout eight batters over six innings with a Game Score of 67. That would have been his seventh best Game Score of 2016. That will play.

The only blemish on Duffy’s afternoon was a fastball that caught the middle of the plate against Miguel Sano. Look at where Sal Perez set the target. 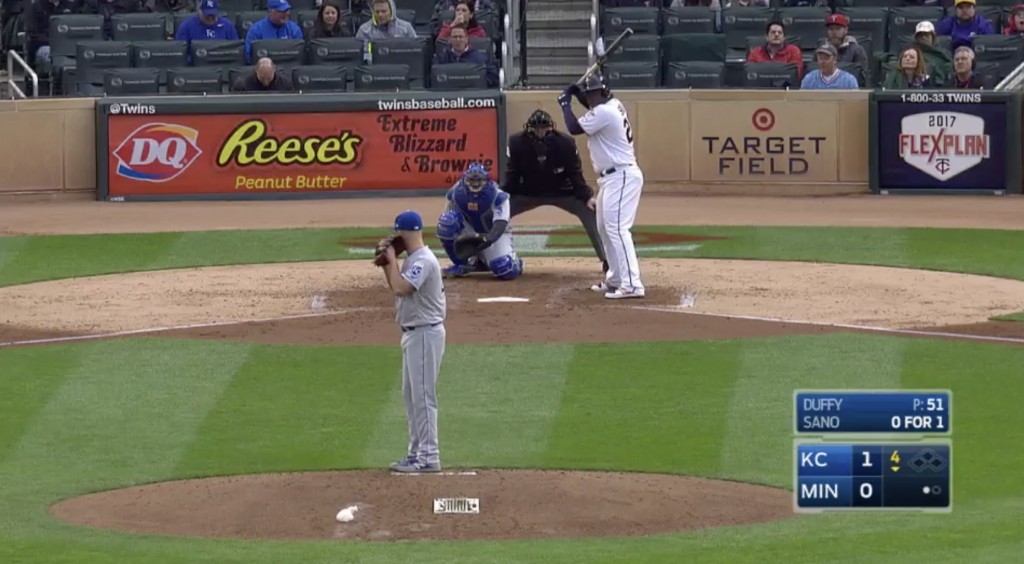 And where Duffy delivered a 91 mph fastball. 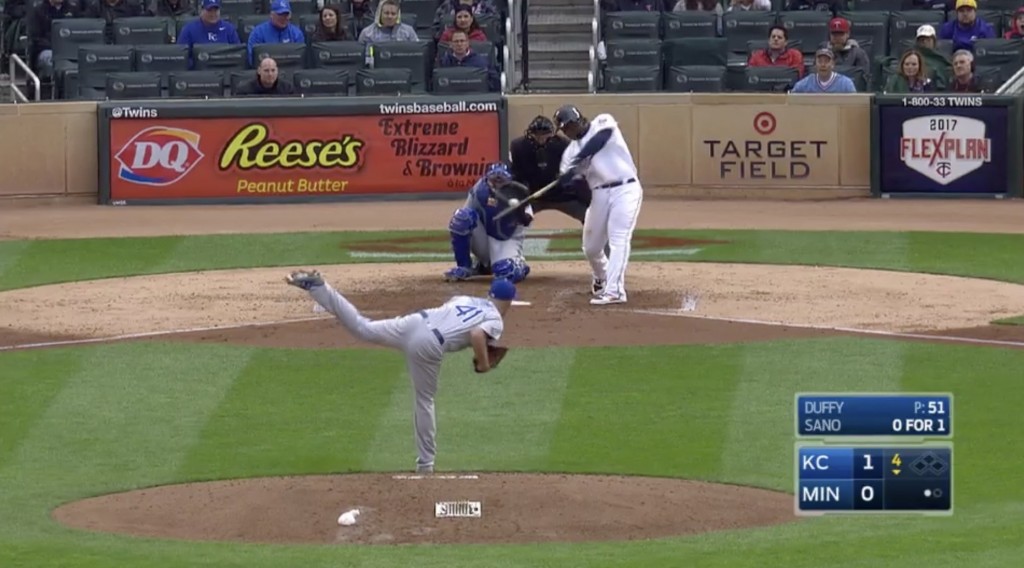 We all know about Sano’s power, but the data says if you pitch him low and away, he’s not going to barrel the ball and hurt you. Catch the inner half of the plate belt-high and you’re going to feel some pain. 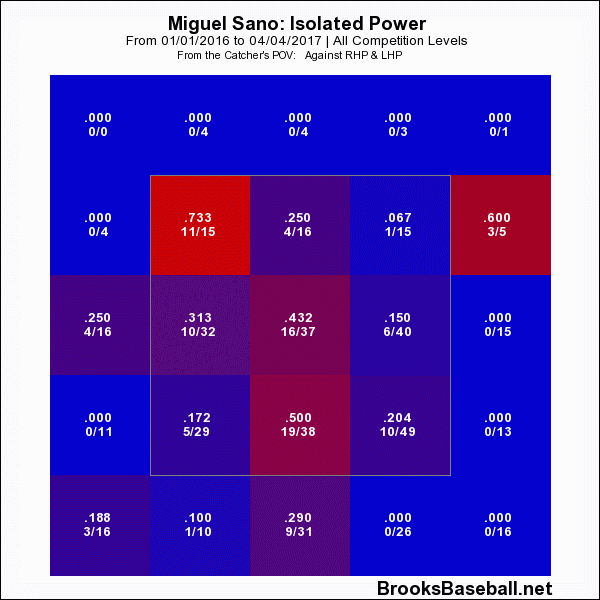 The result was a ball that left the bat at 113 mph. And landed in the second deck at Target Field.

Mistakes happen and that was the only one that caught Duffy on Opening Day. The team didn’t pick up the win, but Duffy’s start can only be termed a success.

Now about the bullpen… Yeah, we have to go there.

Matt Strahm entered in the seventh, which was all according to plan. What wasn’t according to plan was his tumbling fastball velocity. Strahm threw 11 pitches, seven of which were logged by Trackman and presented at Baseball Savant. They were all fastballs. Their velocity:

That’s a little bit of a recovery, but overall it was off Strahm’s fastball average of 93.8 mph from last year. And remember, the data coming from Trackman is trending faster. Again, it’s not enough to worry at this point. We’re talking about ten pitches in a single April outing. Still, it’s worth watching going forward.

Now about that seventh inning strategy. Proponents of “smart baseball” will tell you the intentional walk is a bonehead move designed to set yourself up for failure. While I generally subscribe to that philosophy, like everything in life, there are exceptions to the rule. In this instance, it felt like the correct move to issue the free pass to Brian Dozier, who is clearly the best hitter in the Minnesota lineup. Ned Yost doesn’t call for the intentional walk that frequently at all. In fact, he ordered just eight last year, the lowest in baseball.

And sometimes, as we learned, the right move can come back to bite you in the ass.

Strahm couldn’t locate after the intentional walk and walked home the go-ahead run. In the past, we could blame the four wasted pitches up and away for disrupting his rhythm. This year, maybe he was distracted by his manager signaling his intention to place Dozier on first. (Another interesting aside is following the intentional walk, it appears Trackman lost the velocity data for the next batter. It also caused quite a bit of confusion as to Strahm’s actual pitch count. Such is the danger of fast-forwarding the game.)

Peter Moylan came in and did his job, striking out the right-handed hitting Byron Buxton. Then came Travis Wood to face the left-handed hitting Joe Mauer. Then all hell broke loose. By the time someone was able to locate a pitch, two more runs were walked in and a pair of singles brought home three more. The bullpen is a question mark entering the season, and if Strahm can’t replicate his success from a year ago, the whole thing could go up in flames. Or Joakim Soria will have to rebound. Again, we are talking about one game. The first game in a long season. It’s far too early to hit the panic button, but it’s not too early to keep an eye on trends. Maybe by September, we can look back at Strahm’s velocity and Wood’s lack of control and have a good chuckle. But for the moment, with so much of the season ahead, we can worry just a little bit. It was a brutal end to a promising start.

Tags: Danny Duffy, Matt Strahm |
Craig Brown
Follow @CraigBrown_BP
Craig has been covering the Royals at various outlets for 14 years. His work has appeared at various websites, including Sports On Earth, Baseball Prospectus, ESPN, The Hardball Times, and SB Nation. Reach him at craig.brown@baseballprospectus.com.
read more from Craig Brown