If you’re a fan of offense, this next series may not be the one for you. The Royals take their impotent offense to Chicago for their first series of the year against the White Sox, who have had their own struggles. While they’re not as bad offensively as the Royals, the White Sox have failed to score more than three runs 11 times already in the young season. They were shut out in back-to-back games over the weekend against the Indians before actually salvaging their series finale. Like the Royals, their pitching has actually been pretty okay, but Chicago’s lineup has almost as many holes as the Royals do. And, like the Royals, it’s the stars of the lineup not living up to their billing. Todd Frazier and Jose Abreu have had absolutely atrocious starts to their season. 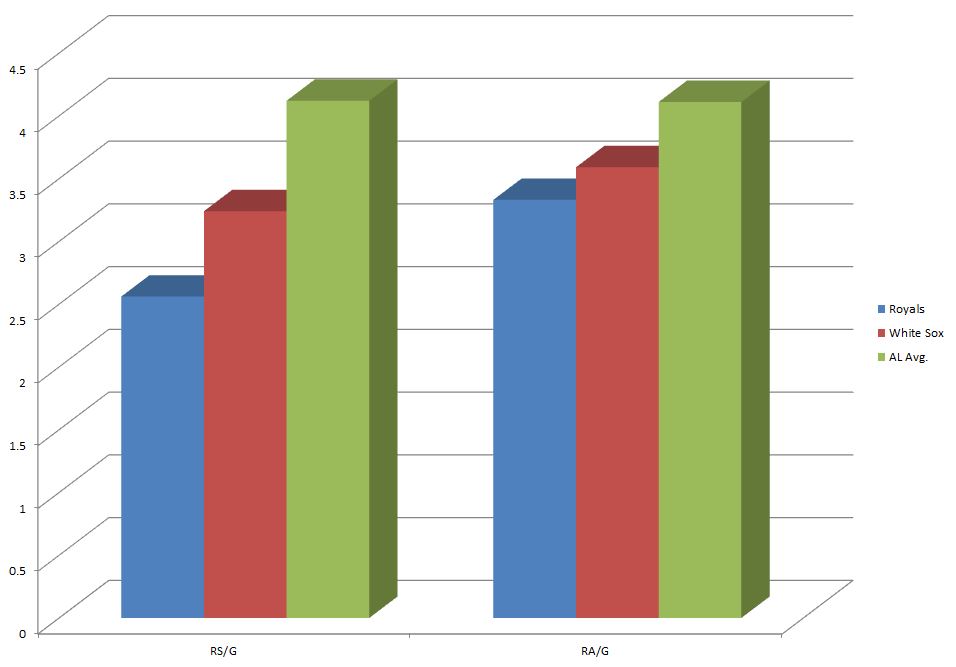 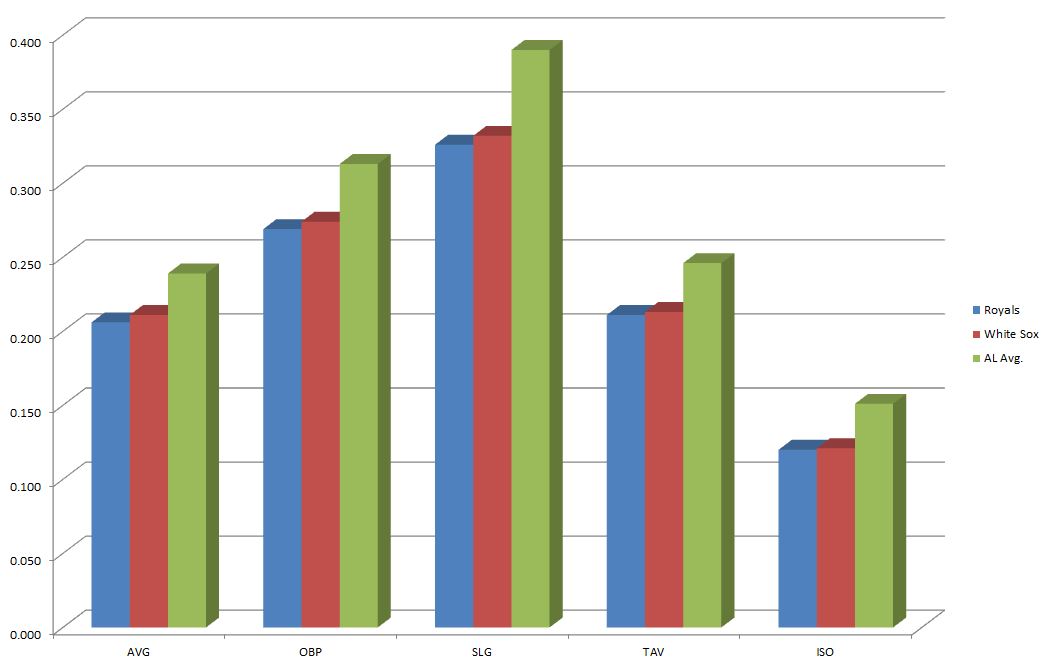 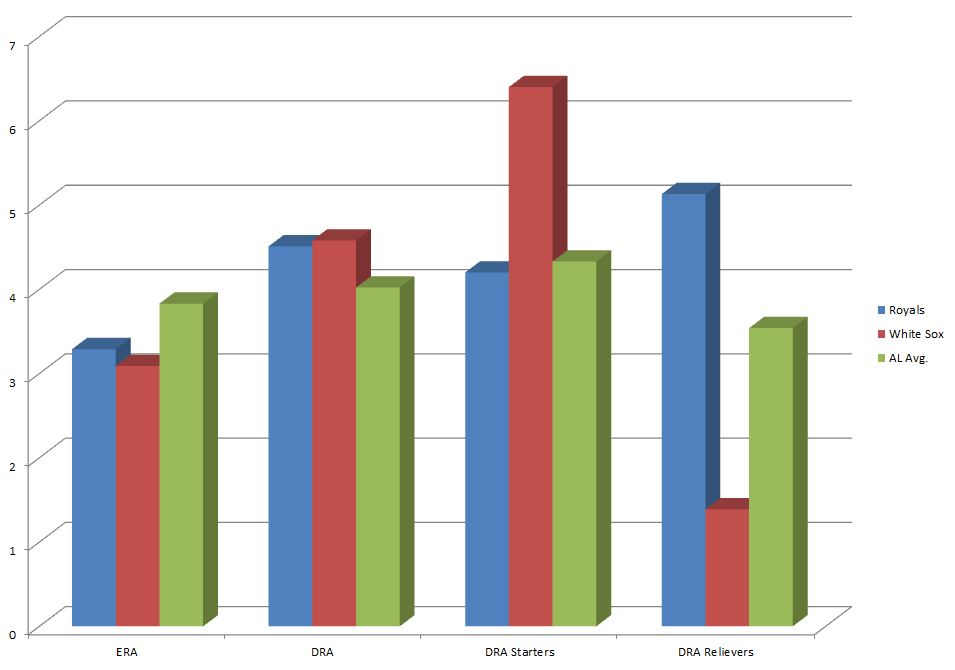 Gonzalez seems like a perennial reclamation project, even when he’s had previous solid seasons. After a solid debut season with the White Sox, he’s followed it up with a good start to 2017. In his last start, he pitched into the ninth against the Yankees, giving up just one run on four hits in earning his second win of the season. He uses a four-seam fastball and a sinker that both sit about 90-91 MPH to for about half his pitches, but adds a slider, curve and splitter as well. This season, nothing has been hit well, but hitters have had success on his fastball for the most part in the past. This year, he’s performed very well against right-handed bats, but lefties have hit him to the tune of a .286/.326/.524 line with both homers he’s allowed. The Royals need anything to get their big lefty hitters going, so maybe, just maybe, this can be it. Of course, in his career, he’s had essentially no split, so it’s likely just small sample size noise.

The Royals turn to Vargas to stop the bleeding, and that’s been a good tactic so far this year as he’s won all three of his starts and hasn’t given up a run since his first start in Houston. What’s been so amazing is his ability to get swings and misses with 39 in his first three starts. He’s also been getting ground balls, so this is a totally different Jason Vargas, and it’s been pretty amazing to watch. At some point, he will likely have a blowup start because everyone does, and especially guys without elite stuff, but he’s on some kind of run right now and is fun to watch.

Covey is a Rule 5 pick of the White Sox who hasn’t exactly been great in his first two big league starts, but the White Sox like what he could bring to their team in the future. He missed most of the 2016 season with an oblique injury, but pitched well enough in the AFL to warrant a pick from the White Sox. He sits in the low-90s with his fastball but has used his sinker with a similar velocity more than 45 percent of the time this season. He also has a changeup, curve and cutter. It’s a very small sample, but literally all of his pitches have been hit quite hard in his first two outings. Unfortunately for Covey, he doesn’t have much of an out pitch, so he ends up giving up a lot of fly ball when he gets to two strikes. His opponent in this one is pretty familiar with that issue. He’s also proof it can be overcome. One thing that stands out to me is that without elite stuff, his control isn’t good enough to make up for it. The way the Royals are going, he’ll probably have a great start, but this is their chance to get right if they’re going to anytime soon.

That Duffy hasn’t been the Royals best starter says way more about Vargas than it does against him because he’s been outstanding. The walks are up and the strikeouts are down from last year, so that’s worth watching, but he’s still getting plenty of swings and misses with 19 in his last start against Texas and 61 over his first four starts. This doesn’t mean as much as many want it to, but Duffy has a 1.29 ERA in 35 career innings in Chicago. Hopefully the name change of the stadium doesn’t take away his dominance.

I’m not sure Quintana’s season could have started much worse for either him or the White Sox. He hasn’t been horrible or anything, but he’s had two bad games and two okay games that have led to a bad start in his first four. I always mention when Quintana faces the Royals that I was wrong about him. Now that we have that out of the way, he throws a fastball and sinker at 92-93 and then mixes those in with a solid curve that he throws about one-third of the time. This year, the curve has been great and the fastball has been okay. The sinker, though, has been a disaster. He’s allowed a .353 average and .853 slugging percentage with four homers allowed in 34 at bats. When Quintana is behind in the count this year he’s allowed a .414/.585/.897 line. That’s kind of bad. When he’s ahead or even in the count, he’s been as good as ever. Also, he’s been lit up early in games with a 1.074 OPS allowed the first time through the order. Strike early, strike often.

Karns had a brutal relief appearance to begin his Royals career before righting the ship with two solid starts. That went by the wayside with a bad performance against the Rangers on Friday night. The good news is that after he struggled to get swings and misses and strikeouts in his first two starts, he finally got that going against the Rangers. Nothing else worked, but that’s at least something. I think he can have a good performance against a down White Sox lineup to get back on track, but he faces the toughest opponent of the series, so a win may be hard to come by.

The Royals offense is as bad as I’ve ever seen it, but the White Sox don’t score much better, as we’ve noted above. I really want to say that the Royals get going in this series, but I just don’t have much confidence in them. Given the inability of both teams to cross the plate, anything can happen because one or two runs may be enough, but I’ll say the Royals sneak out a win and come home with their tails between their legs.