Wednesday saw the Royals win their second game in their last three, with the offense breaking out in a big way. Well, big for the Royals.

Still, it felt cathartic. That’s what happens when the team carries the worst record in baseball – along with the lowest run total.

According to Statcast, the Royals hit eight baseballs with an exit velocity of 100 mph or higher.

Exit velocity is a helluva drug. Gordon and Hosmer’s batted balls were classified as “barreled” by Statcast. That definition is dependent upon exit velocity and launch angle and Barreled balls have led to a minimum .500 batting average and 1.500 slugging percentage since 2015. The shorthand version is barreled balls are good.

Gordon’s was a rope that had a launch angle of 19 degrees. Hosmer’s had the depth, leaving the barrel at 24 degrees and flying 410 feet. Only a nice catch in the deepest part of the park held him from extra bases. Hell, that ball probably would have left the yard in most ballparks. Statcast says a ball with the barreled characteristics of the Hosmer blast is a hit 96 percent of the time. When Hosmer grounds out to the shortstop positioned behind the second base bag, the Royals broadcasters bemoan his “bad luck.” Hell if that’s bad luck. That’s scouting. Hitting a ball 410 feet with a launch angle of 24 degrees and seeing it land in an outfielder’s glove…that’s bad luck.

After Wednesday’s game, there are likely a few think pieces circulating on the interwebs that will predict an offensive breakout based on the crooked numbers hung in the late innings. This team is regressing upward toward the mean. There is certain to be improvement in the offensive game. No team can last the entire season averaging just 2.8 runs per game. (Although the Royals sure did look like they were interested in attempting this early in the year.)

Except the offensive outburst probably was more anomaly than harbinger.

It boils down to a collective approach at the plate. The Royals are swinging at everything. 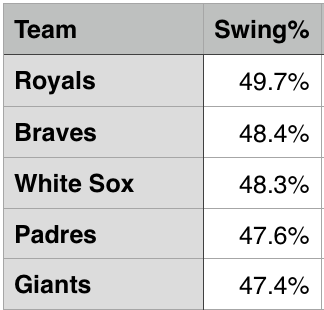 Kind of a shame they don’t have a Bat Day promotion when the Royals and White Sox play each other. Give everyone a chance to swing.

The free swinging Royals isn’t exactly a new development. The pennant winning clubs of 2014 and 2015 offered at 47.5 percent of all pitches. The current Royals are swinging more frequently, to be sure, but it’s not so crazy given the pedigree of the team and the small sample size of one month. What’s notable is they have rocketed to the top of the leaderboard, and by a considerable margin.

They also lead baseball on swinging at pitches outside the strike zone. 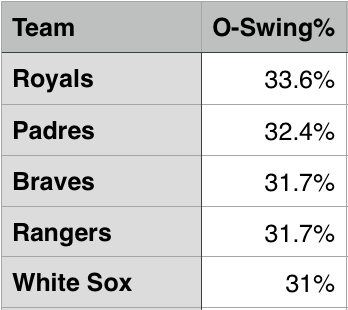 This season has been marked by offensive extremes. Take the swing percentage and the chase rate, coupled with the fact the Royals rank last in baseball with 2.8 runs scored per game, almost 0.6 runs per game fewer than the 29th ranked team, and it’s easy to understand why so many are flinging themselves off the offensive bandwagon. The singles train has been reduced to a stubborn old mule.

The result of the elevated swing rate and the expansion of the strike zone is the Royals are striking out at a rate not seen in the Dayton Moore era. Some of it can be explained away as part of a larger trend in baseball as the game slides into the Three True Outcomes oblivion. However, it seemed as though the Royals held out as long as possible, swimming against the current, bottoming out in 2015.

Individually, each stat offers a sliver of the story. Combined, and we can see how the offensive futility of the first month of the season came to unfold. A traditionally undisciplined team that managed to produce an elevated contact rate comparative to the league unshackled themselves at the plate. As they’ve expanded the zone, the barrels we saw on Wednesday night are becoming increasingly rare. Their collective contact rate of 77.2 percent is solidly in the middle of the pack, but as we saw in 2014 and 2015, that’s not their game. And because they’re chasing, the contact they’re making hasn’t been good. As a team, the Royals own the second highest percentage of soft-hit baseballs at 22.6 percent. Conversely, they have the fourth lowest percentage of hard-hit balls at 28.4 percent.

Plenty of statistics get dismissed as “early” or “small sample size” in the first month of the season. Some of that is valid. But when the trends are loud and clear, even early, it’s difficult to ignore. The Royals offensive ineptitude has resulted in the worst case scenario of a slow start. They have work to do to get out of the hole they’ve created for themselves. The offense can improve, but given the hacktastic nature we’ve seen on exhibit the first month of the season, it’s unlikely they’ll improve enough to sustain a full recovery.

Tags: Alex Gordon, Eric Hosmer |
Craig Brown
Follow @CraigBrown_BP
Craig has been covering the Royals at various outlets for 14 years. His work has appeared at various websites, including Sports On Earth, Baseball Prospectus, ESPN, The Hardball Times, and SB Nation. Reach him at craig.brown@baseballprospectus.com.
read more from Craig Brown