The Royals are no longer on a long losing streak, and that brings out a slight window for some optimism. If you believe the Indians are the team to beat in the Central and the Tigers are the other team to worry about, the Royals have been a little lucky. In their wretched start, they haven’t faced either of those two teams and still sit within shouting distance of both. The luck is over, though, as the Indians come to town for a three-game set. They’ve looked fine. They’re on a pace to win 90 games and all that, but the starting pitching has looked human and now Corey Kluber is on the disabled list with a back issue. The offense hasn’t been great, though Francisco Lindor and Jose Ramirez really have. Add in that Edwin Encarnacion and Carlos Santana are going to get going at some point, and time is of the essence to catch them. I’m not saying I think the Royals can catch them, but they’re still in a position where it’s not impossible for now. This weekend could actually do a lot to make the Royals feel great about themselves in spite of their start or lament the fact that they couldn’t win in an April when the schedule looked somewhat cushy. 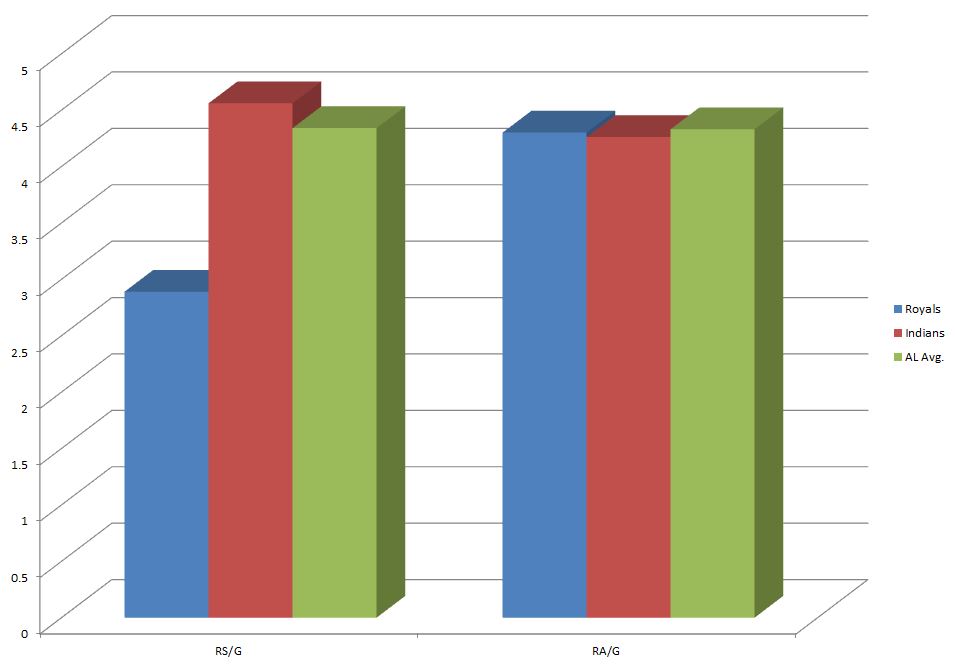 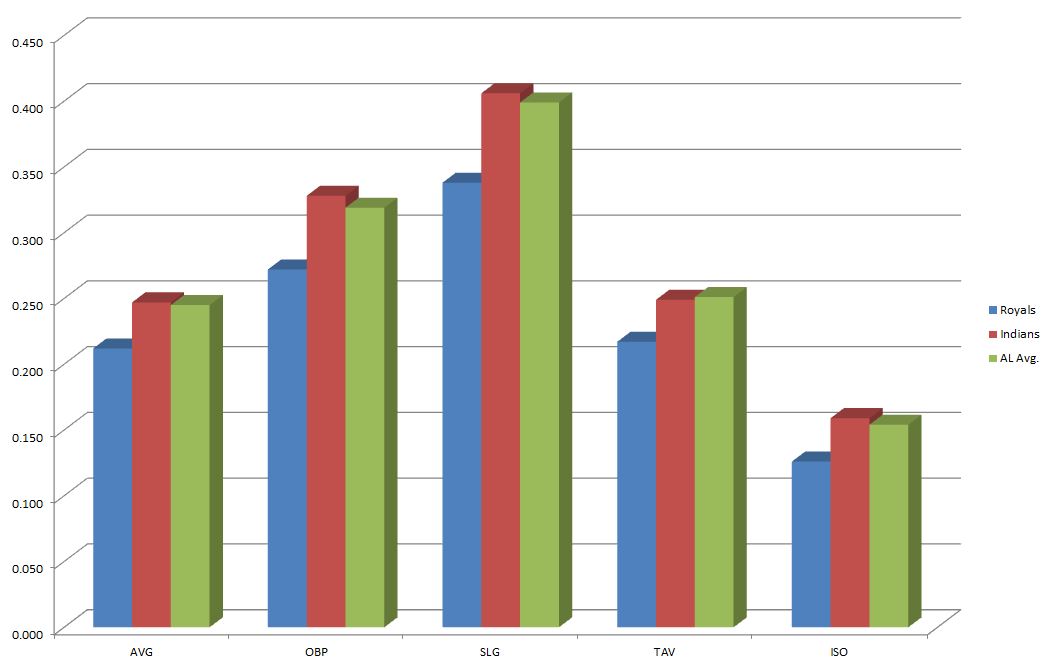 Salazar was a question mark to me heading into the season after his elbow issues in the latter part of last season. He did pitch in the World Series, but you really just never know. He’s been okay to start the season. He’s striking out a ton of batters but also walking a few too many. He really hasn’t been any more hittable or allowed any more runners than in his solid season from last year. He’s just allowed a few more runs. It’s just kind of a game to game struggle because the stuff is so good, but he seems to work really hard to get the results every game. He throws hard, averaging around 95-96 on his fastball and his sinker. He also has relied heavily on a changeup and supplementing with a slider and a curve. He is throwing the changeup a lot more this season, which is interesting, and it’s been really good this season. A weird quirk to his season so far is that he’s allowed a .091/.447/.091 line when he’s actually behind in the count but a .304/.304/.457 line when he’s ahead in the count.

Hammel has, without question, been the Royals worst starter through the first few weeks of the season. He’s struggled to throw strikes and when he does throw strikes, the ball gets hit pretty hard. He’s gone just three innings in each of his last two starts, allowing eight runs on 10 hits in those two outings, both losses. When an offense is struggling like the Royals are, they can’t afford to be getting regular performances like that, so Hammel will need to do some work in this one.

Tomlin doesn’t walk anyone and he still has a WHIP of 1.757. That’s how bad he’s been and how easy to hit he’s been this season. He’s allowed 38 hits in 23.1 hits. That’s an amazing number. What’s a little scary for him is that the peripherals are all basically in line with what he’d done in the past. He relies heavily on a sinker and a cutter. The sinker works around 87-88 MPH while the cutter is just a couple miles per hour slower. He also has a curve that can be very good, the occasional four-seam fastball and a very occasional changeup. He’s allowed a .394 average on his sinker with a .546 slugging percentage and a .452 average on his cutter with a .548 slugging percentage. He was brutal in his first two starts but has posted a much…better…5.29 ERA in his last three starts. Tomlin throws a ton of strikes and if his stuff is as down as it appears, swinging early should work. He’s allowed six hits in 13 at bats on the first pitch this season. That should be a task the Royals feel comfortable with.

He’ll face off against the Royals best starter this season, Jason Vargas. Vargas didn’t have his best stuff in his last start, but he still gave up just one run in six innings. One thing that’s been a hallmark of his season up until his last start was getting whiffs. He had 55 in his first four games but just four in his last start, all on his changeup. The Indians have collectively done well against that pitch, so I wonder how he’ll get it done against their lineup.

Clevinger gets the start in place of the injured Corey Kluber. He gave the Indians some valuable innings last season and showed that he’s quality depth for a pitching staff. He was a little homer happy, but he did a nice job of limiting hits and getting strikeouts for the Indians. He throws a lot of fastballs and averages about 94-95 MPH. He also has a changeup and a slider and occasionally throws curves and cutters. The slider can hang at times, but the curve was crushed last year in its limited exposure with a .417 average allowed and .667 slugging percentage. He allowed a .349/.548/.619 line when he fell behind in the count last season, and his control isn’t that great. The Royals likely need to do something they don’t do well and make him work. Though they did make Salazar work in game one of the series, so you never know.

Duffy is coming off another rough start, which makes two straight against the White Sox. I’m not sure if there’s something lingering from the balk call and thinking he doesn’t have his slide step or what, but he’s gone back to not striking out nearly as many hitters as you’d expect and walking too many. He needs to correct that because he’s such a key cog on this team both this year and in the future. It’s worth noting that he did bounce back from a rough start where he just wasn’t getting any whiffs and picked up 12 in his last start.

It looks like the Royals have a couple of inviting matchups for their offense against Tomlin and Bauer, but both of those pitchers have shut down the Royals in the past and that was when they looked like a much more competent offense than they do now. That said, maybe they have a little momentum and a little swagger back. Even with that, I think they just capture one game this weekend and fall farther behind.

Tags: Danny Duffy, Jason Hammel, Jason Vargas |
David Lesky
Follow @dblesky
I've been a Royals fan since the day I was born, and have had the opportunity to write about the Royals for nearly a decade now. The winning was better than the losing, but the losing is kind of familiar at least.
read more from David Lesky