Left-hander Erik Skoglund was making his major league debut. The Tigers stacked their lineup with right-handed thunder. It was, simply, a rookie making his debut against a veteran lineup. On paper, it was a mismatch. Conventional wisdom held the Tigers could rip this kid to shreds.

Skoglund was brilliant in his major league debut, keeping the Tiger batters off balance all evening, spinning 6.1 innings of shutout baseball.

He walked off the mound with one out in the seventh with a Game Score of 73, tied for the third best starting pitching debut in Royals history. It was the 11th debut Game Score of 60 or better for the Royals.

Let’s break it down.

Things are little different in the big leagues. Better lights, larger crowds, a postgame spread that is more than peanut butter and jelly. Oh, and there’s the defense. Big league defenders can pick it. And Mike Moustakas is a big league defender. The first batter of the game, Dixon Machado laces one to third.

Going to his left has never been Moustakas’ strong suit defensively. He’s much better going toward the line. So far this year he’s graded as a -2 on balls to his left according to the Fielding Bible. At least that’s where he was before he laid out for a stellar defensive play to open the game.

Welcome to the majors, kid. Enjoy the defense.

After retiring Nick Castellanos, the real lumber approached the plate. Miguel Cabrera is going to the Hall of Fame. Skoglund pitched him carefully. Six pitches and a walk.

This is where Skoglund encountered his only difficulty of the evening. Victor Martinez hit a dribbler for a single. Such a fluke. According to Baseball Savant, it left the bat at 60 mph with a launch angle of -35 degrees. Balls put in play with those characteristics are hits five percent of the time.

This is the moment where you want to shield your eyes. We’ve seen these scenarios before with major league debuts. There always seems to be a speed bump, and it usually comes early. However, the runners on base didn’t faze Skoglund. Against JD Martinez, he opened with a pair of high four-seamers for strikes. Martinez took a couple of low balls – the second of which should have been a strike – before he flailed at a curve way down and out of the zone. 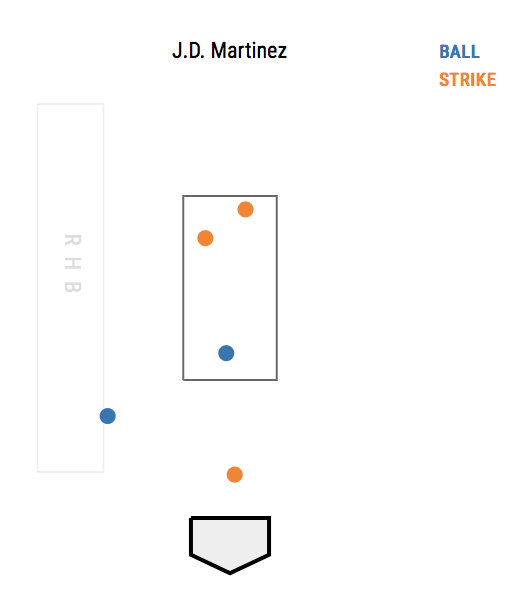 If the first inning isn’t going to cause the rookie to falter, what will? Skoglund started all three batters with strikes and took control of each plate appearance. It took five pitches to whiff John Hicks and seven to sit down JaCoby Jones. 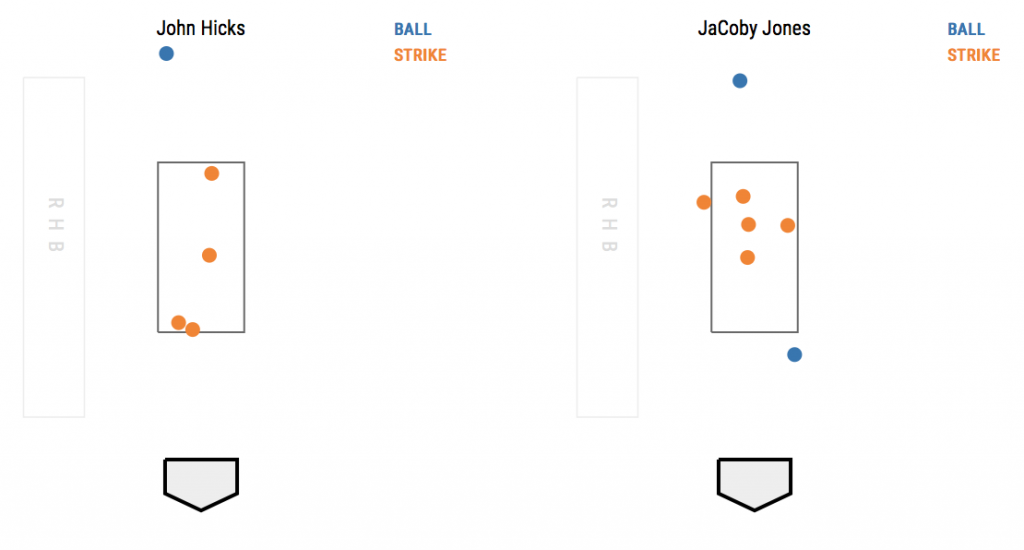 He’s living dangerously in the middle of the zone, especially to Jones, but the strikeout victims could only foul off the meatiest of those offerings. Skoglund clearly found his groove.

If he needed to battle through the first and work for his strikeouts in the second, the third was a walk around the fountains. Three pitches for Jose Iglesias. Two for Machado. And two for Castellanos. No whiffs, but damn, that’s a tidy inning.

This is the danger zone. Second time through the heart of the Tiger order.

Against Miguel Cabrera, he went fastball, slider, fastball, all on the inner half. After looking at the first fastball – a two-seamer that was clocked at 89.6 mph – Cabrera whiffed on the next two offerings. Whoa. 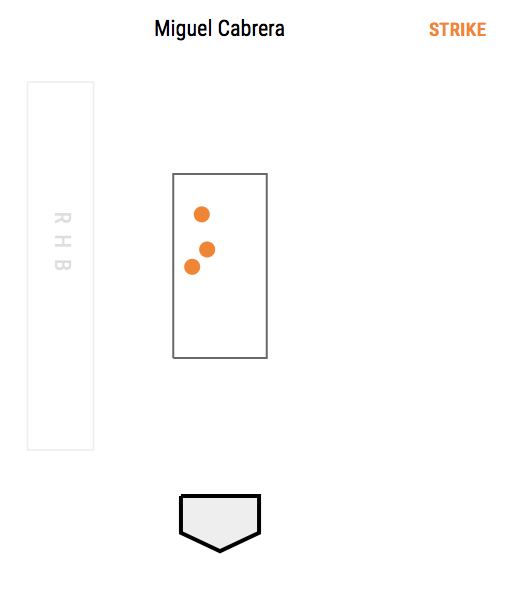 Victor Martinez gave him a battle. A nine-pitch plate appearance was tied for the longest of the night for Skoglund. After fouling off five pitches, he grounded to second.

That was kind of the night in a nutshell for the Tiger batters. They got pitches they could connect on, yet they couldn’t square Skoglund up to do any damage. Through the first four innings, the hardest hit ball was a first pitch fly out off the bat of JD Martinez to end the fourth. It wasn’t exactly a textbook performance. It felt more like a veteran team getting a first look at a rookie – which it was. Yet it was enthralling to watch.

Skoglund fell behind Justin Upton and Hicks to open the inning. In both cases, they made out on the next pitch. Jones gave Skoglund a bit of a battle again, fouling off a couple of strikes, but whiffed on a 91 mph fastball well up above the zone.

One pitch was all Skoglund needed to get past Iglesias, but that meant the lineup flipped for the third time. This, my friends, is the true danger zone. And it showed.

He battled against Machado, Castellanos and Cabrera. Those three hit the hardest balls of the night against Skoglund in this inning. Machado singled with an exit velocity of 96 mph. It was the first baserunner allowed by Skoglund after retiring 14 consecutive. Castellanos followed with a screaming line out to third that measured 101 mph off the bat – the hardest ball hit all night off the rookie. That’s a hit 68 percent of the time. And Cabrera made the final out off a grounder with a 97 mph exit velocity thanks to an Alcides Escobar textbook play where he ranged to his right to plant and throw from the outfield grass. Cabrera is slow – thank god – but that is a hit 55 percent of the time.

One item of note, this was an inning where Skoglund shelved the curve, throwing it only on the final pitch of the inning, that hard grounder Cabrera hit to the hole at Escobar’s backhand. It’s his second best off-speed offering, behind his slider, and it was a pitch he struggled to throw strikes with on Tuesday. Overall, he threw 13 curves and just seven were strikes. He probably intends for it to be a chase pitch, but it wasn’t happening. Skoglund recorded just one swing and miss, on a strikeout to JD Martinez in the first. It’s the one down, just above the plate. 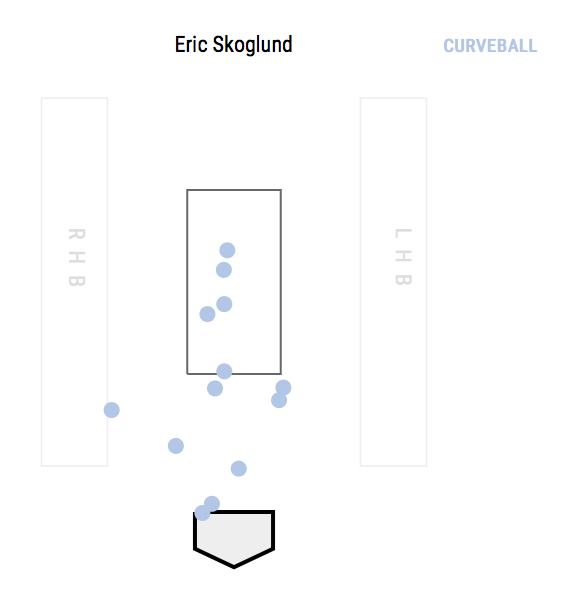 Three of the four curves in the middle of the zone were first pitches. It felt like that was something Skoglund was able to get away with since it was the first time the Tigers had seen him pitch.

Huh? Shouldn’t six have been enough. Leading off was Victor Martinez. The Tigers DH is a switch hitter, hitting better against left-handed pitching, both this season and in his career. Another battle ensued, before Skoglund got him to fly out.

And that was his night. Ned Yost came out to get his starter and Skoglund walked off to a deserved standing ovation.

Overall, Skoglund threw 90 pitches and got nine swings an misses. Five of those were the final pitch of an at bat, resulting in a strikeout. After that wobbly first inning, where just 55 percent of his pitches went for strikes, he really settled in and cruised in the second through fifth innings. The fastball and slider combination was extremely effective. On his slider, 14 of his 16 he threw were for strikes. Detroit batters swung at a whopping 13 of them. 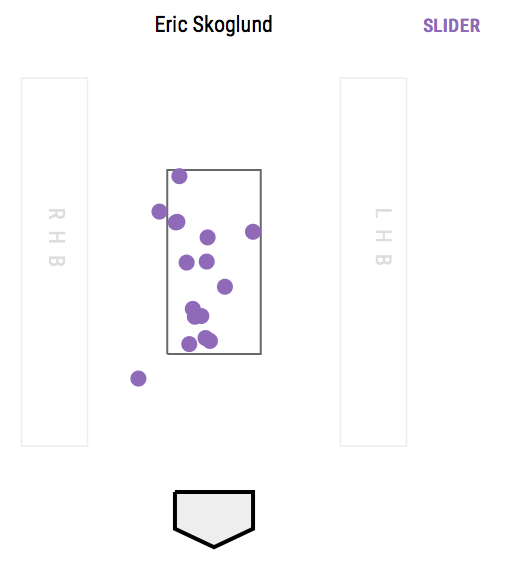 It’s obviously a pitch he can throw for a strike. Skoglund must have felt he needed to.

After cruising through five, he ran out of gas in the sixth, but was able to keep the game on track.

As mentioned previously, this felt like a veteran, major league team getting their first look at a rookie. Which it was. That shouldn’t take anything away from Skogland. He fought enough to work through the difficult part of the Detroit order three times. Sure, he lived a little too much in the zone, but for one night, it worked. Now that the majors have experienced Skoglund, the book begins to be written and the next time out, he’s more likely to get punished for some of those pitches.

Still, for one night, baseball was alright in Kansas City again.

Tags: Eric Skoglund |
Craig Brown
Follow @CraigBrown_BP
Craig has been covering the Royals at various outlets for 14 years. His work has appeared at various websites, including Sports On Earth, Baseball Prospectus, ESPN, The Hardball Times, and SB Nation. Reach him at craig.brown@baseballprospectus.com.
read more from Craig Brown