Earlier, we reviewed the first four rounds of the 2017 MLB Draft. If you haven’t had a chance to read that, click here. Below we’ll take a look at the rest of the top 10. Check back early next week for a review of the rest of the draft, rounds 11-40.

The “halo” effect took place with Neuweiler as it often does during the draft when scouts come in to watch one player and get impressed by another enough to decide to draft him. In Charlie’s case, team personnel was in to see teammate Quentin Holmes and came away liking the developing right-hander.

The high schooler presents a low-90s fastball that he can run up to 92-93 mph with decent control at the high school ranks with a spike low-80s curveball that looked plus on some days. The spike curveball is a pitch of controversy, as most times players have difficulty controlling the pitch and manipulating it with regularity and are forced to change it in the pro ranks. This could be the case for Neuweiler. As with any high schooler, the changeup is in its infancy stages and will need to come forward to become a true prospect.

Analysis – The control profile from the limited video I saw didn’t look great and with the curveball possibility needing some tweaks, the Royals development staff could have their hands full in trying to create a prospect.

Zuber is a power right-handed pitcher who features two plus pitches according to his coach at Arkansas State. Featuring a fastball that works up to 96 mph next to his power two plane slider from his whip motion that is short and quick. The slider comes from the same tunnel as the fastball making it unrecognizable to hitters and his ability to backfoot hitters or sweep it away makes the combination incredibly difficult to deal with as evidenced in his 80 strikeouts in 52.1 innings and sub-1.00 WHIP this season.

Via Perfect Game – Smaller-framed and a reliever-only, Zuber fits the mold of a quality senior sign who should advance quickly through the lowest levels of the minors. He gets up to 94-95 mph with his fastball at times though he’s more 91-93 mph consistently, and his quick arm helps him spin a decent breaking ball as well. He’s also lauded for being an above average athlete on the mound.

Analysis – The Royals have excelled in the past at finding power armed relief pitchers and this one looks like a possible steal along those same lines. 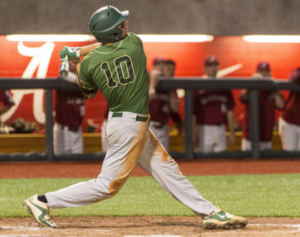 Every year, the Royals love to take a former football guy it seems in the first few rounds, and that guy this year is Hicklen who went to UAB with the idea of playing both before the program stopped its football program for a couple years. A legit 70 runner, Hicklen ran the 40 in 4.53 seconds as a senior in high school. Able to concentrate on baseball without the football program, he improved his hit tool in college and despite a broken hand the last half of this past year was able to put together a 19-game hitting streak to go along with a 40-game on-base streak while hitting .328/422/.586 for the year.

Baseball America – He’s strong and fast at a listed 6-foot-2, 208 pounds, with 70-grade speed that helps make him a legitimate future plus defender. He has an average arm and above-average raw power. He got more aggressive at the plate this year, resulting in more strikeouts but also a jump from three to eight home runs. Hicklen’s feel for hitting is raw as he needs more reps due to the development time he has missed due to football. He’s a charismatic leader and excellent teammate who plays with intensity. Hicklen would have to be bought out of football, which may be the best argument UAB has to keep him.

Analysis – The Royals have yet to hit on one of these lottery tickets but one would think they will eventually hit their target. A center fielder with developing power and an improved hit tool along with a plus work ethic and good attitude is always a good addition to an organization in the minor league ranks.

According to Coach Martin, this left-handed pitcher works 89-93 mph as a starter which could see another tick in velocity as a relief pitcher. Working from a 3/4 arm angle, Capps has the ability to drop his arm angle if needed to create deception against hitters. The two-seamer from the lefty features plenty of downward movement or he can run the four-seam up with more velocity.  A curveball and morphed slider/slurve go along with the fastball for Capps with the ability to manipulate the spin and speed on the pitches. A changeup lags behind the fastball/breaking ball combination currently while the statistics and high walk totals indicate a pitcher that needs to be moved into a one-inning relief role.

Baseball America – Capps transferred from UNC Charlotte to Central Oklahoma for his senior year. He pitches in the upper 80s with his fastball and can touch as high as 92 mph. He’s skinny and has some room to add strength to his frame. His performance for Central Oklahoma was unspectacular; while he struck out 92 batters in 96.1 innings, he also had a 4.39 ERA and walked 40 batters.

Analysis- Capps appears ticketed for a LOOGY relief role that you add to the system at a below slot value in hopes that you can tighten the control profile to turn into a fast moving lefty reliever.

Those who are familiar with the College World Series should be familiar with Cloney after his 16 scoreless innings in last year’s tournament. A senior sign, Cloney is a low-velocity lefty who works his fastball in the mid*80s while topping out at 88 mph. The plus command profile baffles hitters along with his crossfire delivery and ability to manipulate the four pitches in his arsenal. The fastball features arm side run as well as an ability to sink the pitch, change speeds and work both sides of the plate.

Next, to the fastball, Cloney likes to use his 2/7 slider that works well with the fastball that he works away with run from righties then comes back with the slider, back footing the opposite side hitters with a good two-plane break in the low 80s. The lefty also can manipulate the slider into a cutter and pair it up with his armside fading changeup. That change, like all his other pitches, is a solid average offering that he throws in the low 80s while featuring some armside fade to it. The sum of all the parts here is greater than any one with Cloney’s knowledge of his stuff and hitters tendencies to take advantage of them despite average tools.

MLB.com – He’s not the type of pitcher who will overpower you with his fastball, but he doesn’t need the velocity of other hurlers to be successful. The left-hander has a fastball that can reach the upper 80s with solid run and sink, working the corners of the plate well. His command and overall feel for pitching are evident with his slider and changeup, too.

Analysis – As a senior sign, one doesn’t expect a whole lot here but maybe his pitching IQ and the mix is so great that you luck into a backend starter. Likely scenario is an inning eating organizational starter.

The big bodied lefty works with sink on his low-90s two-seam fastball that tops out at 94 mph that goes along with a swing and miss slider. Despite the two pitches that should work well together, Floyd was able to get hit quite a bit in college, giving up an average of 10 hits per nine throughout his 91 appearance career at Kansas State. The big but still athletic Floyd also features a usable changeup with all of his pitches featuring late life from his 3/4 delivery.

Perfect Game – Floyd may have been the most unique prospect in the Alaska Baseball League. His frame is 6-foot-2 and 250-pounds, yet he is an outstanding athlete who was a high school point guard. He is also a high school draft pick (New York Yankees in 2013, 25th round) who will be back for his senior year of college. Most importantly though, Floyd used his heavy sinking fastball in the 89-91 mph range to utterly dominate the ABL this summer. In this breakout performance, Floyd led the league in both ERA (0.45) and saves (9).

Analysis – Floyd is a big body senior sign who you can count on to give your minor league squad relief innings.

Seems odd they had so many college senior signs and didn’t have tough prep signs that you would think they had to go overslot for. Do they think Pratto will be that expensive? I believe Neuweiler signed for less than slot too.

I was really surprised they were able to get Gigliotti for underslot. I don’t know how much Hicklen signed for, but maybe it’s a combination of Mendelez and Pratto needing to go overslot?

They have quite a few prep picks in rounds 11-40 that have some solid ceiling that they could try to bring into the fold.

With Pratto signing for underslot, it looks like the Royals have around 550k to play with so far. I imagine Cloney and Floyd will also be underslot deals, but do you have an idea of what it’ll take to get Mendelez and Steele in the fold?

These reviews are great by the way!