As the Royals swept through Seattle, they did it in a very New Royals sort of way.

For sure, there was some quality pitching in the mix. Vargas’ rough start aside, they got a pair of good starts from Ian Kennedy and a semi-rehabbing Danny Duffy. The bullpen was nails, throwing 10.2 innings and allowing just a lone unearned run while whiffing 10.

But it’s the home run that is providing the electricity behind this team.

The Royals tallied 18 runs in the three game sweep. Here’s how they scored:

Wait, that’s not everything. How could it be? The above list only represents six runs, with each entry counting for a single run except for a two-run double off the bat of Salvador Perez on Tuesday.

Where are the dingers? So glad you asked.

Once again, the Royals turned to the long ball in their destruction of an opponent. This continues a season long trend of a team that has become increasingly reliant on the ball leaving the yard for their offense. As noted earlier, they’re not much different than the average American League team when it comes to dependance on the home run. It’s the Royals, a team that has traditionally treated the home run like some sort of virus to be avoided at all costs.

Kind of difficult to avoid that when Mike Moustakas is crushing home runs on a daily basis. Three more in Seattle to start the road trip, and he’s obliterated the Royals record for home runs in the first half. (That’s kind of a silly statistic, since the number of games in the first half vary from season to season, but it’s unavoidable when you’re following the team.)

The first half power surge has earned Moustakas an invite to the annual Home Run Derby and landed him in the final vote for the All-Star team. It tells you a little something about Royals power when you realize he’s the first Home Run Derby participant from Kansas City since 1991.

It won’t surprise you to learn that Moustakas is pulling almost everything he hits over the fence. While more rounded hitters will hit more out to the opposite field, the capital S Sluggers will rely on their pull power. He’s always had the potential, but this season Moustakas has become a Slugger. 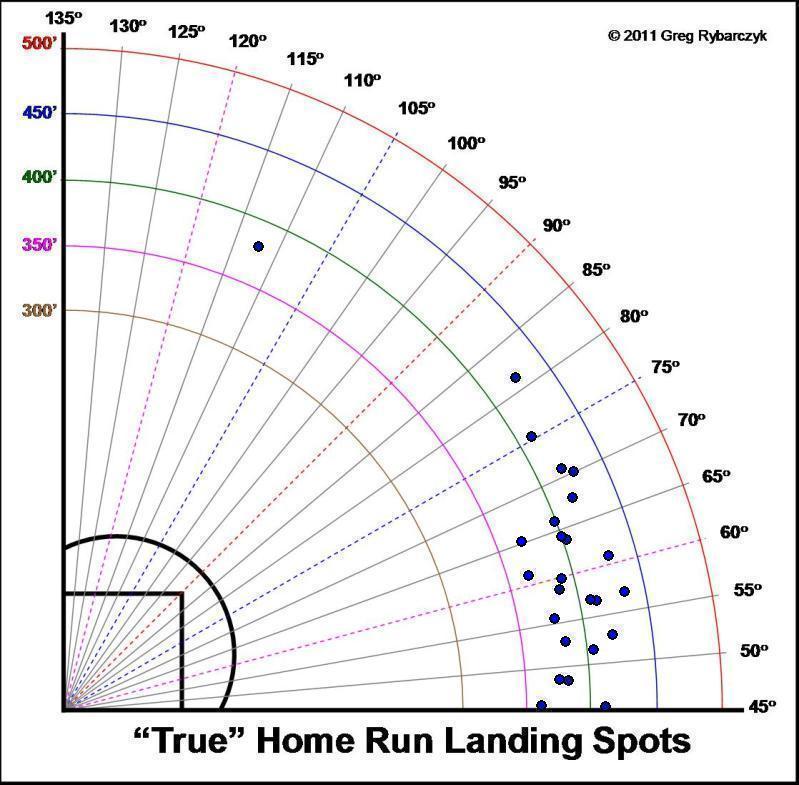 The above chart comes from the ESPN Home Run Tracker (also known as HitTracker Online), a resource that is a nice compliment to the invaluable Statcast. Hittracker will sort the home runs by “Type,” meaning they’ll classify each home run based on how far it flies over the fence. Sure, it’s simple, but it’s a nice way to illustrate the staying power of… well, power.

Here’s how Moustakas’ home runs have been classified by the Home Run Tracker this season:

The above home run that is classified as Just Enough/Lucky came off the bat last night. That home run, apart from flying out to right field, was an anomaly for Moustakas this year. He’s crushing his home runs. His average home run has travelled 398 feet this season and left the bat at an average exit velocity of 105 mph.

How is he doing it? Like most left-handed batters, Moustakas enjoys the ball low in the zone. Like most power hitters, he also enjoys extending his arms for maximum power. Brooks Baseball has his happy zones broken down by ISO. 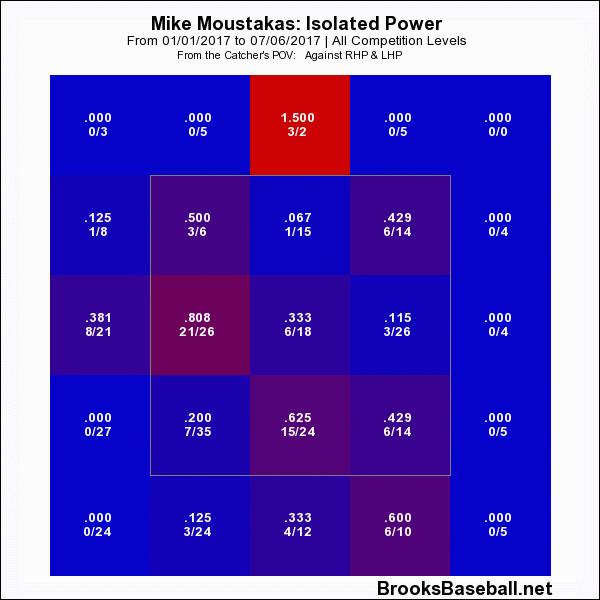 (Pro tip: If you’re traveling to Miami for the Derby and want to snare a Moustakas home run ball, sit in right and hope for a pitch down or away.)

Of all the Royals players in the first wave of The Process, Moustakas was always the one with the most power potential. We saw flashes from time to time, but the true unlocking of the home run within came in the 2015 season when he became, for a time, a more complete hitter. Strange as it may sound, taking the ball to the opposite field to beat the shift was the first step. His 2015 season was when he posted a career-high .348 OBP, and it was when he hit his previous career-high 22 home runs. The all-fields approach has dissipated, but the swing and confidence remains intact. We saw a glimmer of what could be when he posted a .500 slugging percentage before he lost his season to injury.

While 2016 was promising, it was ultimately unfulfilling. And it led to questions of the Moustakas we would see in 2017. Would it be the all fields approach from 2015, or the power of the abbreviated 2016? Today, with a slugging percentage at .559, the answer is obvious.

Moose Power is driving the Royals out of the AL basement and in to post season relevance.