The Royals open up their post-break schedule with a visit from the Texas Rangers, a team under .500 a season after winning their division. One of the big reasons for their struggle this season is that they just haven’t been healthy, but that’s a recurring theme with this club. Cole Hamels has missed a ton of time. Adrian Beltre has missed a ton of time. Others have too, but those two are the big ones. They’ve still scored a ton of runs by hitting a ton of home runs and their pitching has actually been okay too, but the whole has seemed to be less than the sum of their parts. 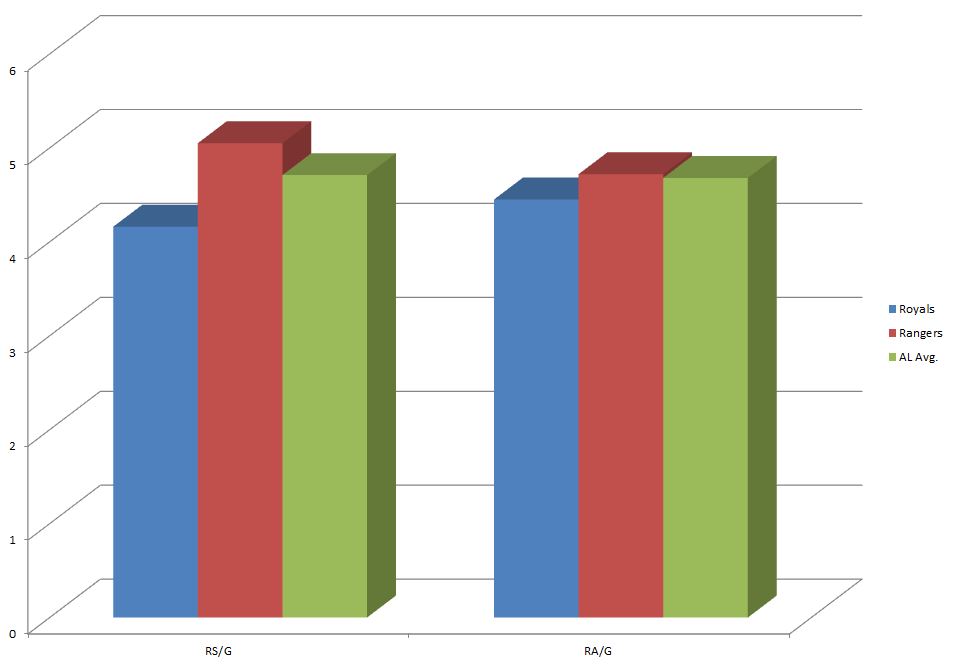 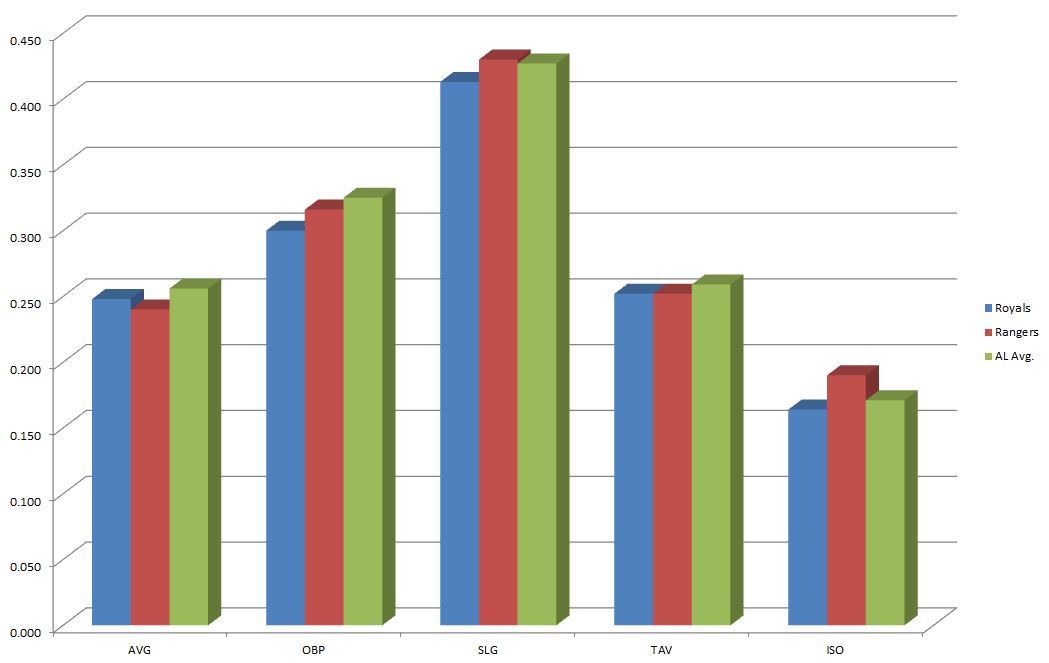 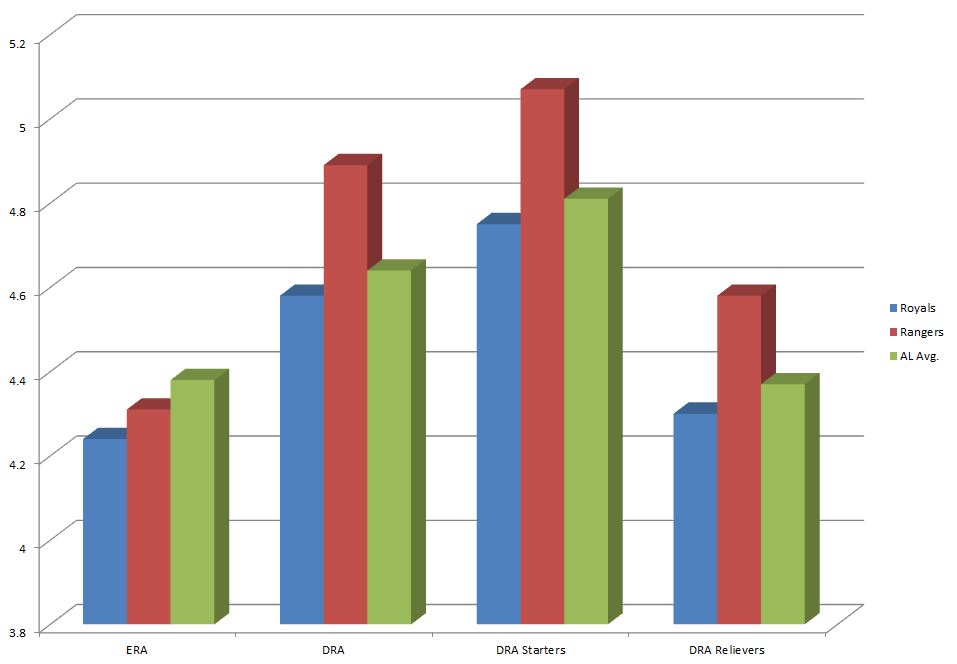 The Rangers open out of the break with Perez, who is really just sort of an okay pitcher, which is fine. He doesn’t strike out many and he walks too many, but he gives five or six innings every time out and his team is generally in the game when he leaves. This year, he’s two, three or four runs in 11 of his 16 starts. He’s recorded an out beyond the sixth inning just three times this year and he’s failed to last five innings just twice. He is what he is.

The stuff looks better on paper than it does in reality and in the results. He has a good looking four-seamer and a good looking two-seamer that both average around 94 mph with a changeup for righties and a slider for lefties. He also mixes in a curve. The two-seamer has been hit hard, but the damage has really been done on his slider and curve. The slider usage could cause some trouble for Eric Hosmer, who has only hit .265 with a .347 slugging percentage against sliders from lefties this year. He has, however, hit .351 with a .541 slugging percentage against lefty two-seamers, so that’s a pitch to watch for him. Lorenzo Cain has two home runs and a .500 SLG against changeups from left-handed pitchers this year, so he might be able to get out of his lefty funk as well. Teams don’t need to get to Perez early. He’s allowed a .746 OPS the first time through the order, but that goes up to .818 the second time and .976 the third time. The Rangers will need to have their bullpen ready to go.

The season on the whole hasn’t been so great for Hammel with the bloated ERA and DRA, but he’s been much better of late, going 3-2 with a 3.71 ERA since the start of June. In that time, he’s averaged more than six innings per start and has struck out 37 while walking just nine. Basically he’s been exactly what the Royals thought they were getting. Historically, he’s fallen off a lot in the second half of seasons with a career ERA nearly a full run higher than in the first half. He’s still been at least serviceable in the second half in four of the last five seasons, so even if he just posts the same 4.35 ERA in 70.1 innings over 13 starts after the break he did last year, the Royals will be in decent shape.

The Rangers gave up an awful lot to get Cole Hamels from the Phillies at the deadline in 2015 and while he’s been good for them, I have to wonder if they’d say they’ve been underwhelmed. His walks are up and his strikeouts are way down this season, all the way to 4.9 per nine innings. His seven percent swinging strike rate is glaringly low, which makes it even more surprising that he’s allowed just 38 hits in his 51.1 innings.

His velocity is way down this year with his four-seam fastball averaging less than 92 mph and his two-seamer just over it. He’s been between 93 and 94 for awhile now, so this is a big change. Like Perez, he uses his changeup on righties, so the same Cain caveat applies here as well, but this changeup is a better one than what the Royals will see in game one. The dangerous weapon for him this season has been his cutter. He’s allowed a .097 average and .194 SLG on that pitch. With no real putaway pitch this season, opponents can afford to get deeper into the count against Hamels. He’s allowed just a .211/.200/.211 line when the at bat ends after the first pitch, but he’s allowed a .250/.276/.411 line when he’s ahead in the count. Hamels numbers definitely can’t remain where they are if he continues to pitch the way he is. He either needs to get better or his numbers are very likely to get much worse.

Duffy was victimized by the home run ball in his last start, which hasn’t been a problem for him at all this season prior to that. One trend did continue that was nice, was he kept getting swinging strikes. He’s now recorded double digits in that category in nine of his 13 starts this year and in five of his last six. He keeps that up and he’ll be just fine.

After three straight seasons marred by injury, Darvish has made 19 starts this season and has continued to be a very, very good pitcher. Every time he takes the mound, he’s a threat to throw a no-hitter, so that’s pretty scary. This season, his strikeouts are down by a fair amount to below 10 per nine innings for the first time in his career. That’s a concern for the Rangers, but he’s pitching for free agency now (and maybe to get the Rangers back in the race), so he has plenty of reason to be up for the season’s second half.

Darvish throws a lot of different pitches, but really focuses on two fastballs with quality velocity, a slider and a cutter. The rest are just window dressing. If he wants to throw the two-seam fastball to Mike Moustakas, I don’t think anyone associated in any way with the Royals would complain. Moose has hit .421 with a .790 slugging percentage on sinkers from right-handed pitching this season. While I think Moose may have a tough time coming out of the break, this is where he has a chance to get back on track. Home runs aren’t an issue necessarily for Darvish, but he also hasn’t been exceptional at limiting them, so that’s how the Royals have a shot against him. His stuff is really good, and often with these guys, it’s the first pitch that’ll get the job done. He’s allowed a .341 average and .610 slugging percentage on at bats ending on the first pitch this year, so the Royals swing early approach may do the trick a couple times against him.

Kennedy took a lot longer than anyone wanted to recover from that hamstring injury, but it appears he has. In his last five starts, he’s gone 30.1 innings and allowed just 21 hits with 27 strikeouts and eight walks. That’ll certainly play. He’s gotten the swing and miss back recently too with 13 against Seattle on July 3 and 12 against the Dodgers his last time out. He handled this Rangers team just fine in a loss back in April, but they’re different now with Beltre. It’s a scary lineup with Kennedy’s propensity for allowing the long ball, but it’s nice to see him pitching well after an extended struggle.

While I don’t think there’s any shame in getting swept by the Dodgers, there’s still a bad taste from actually losing all the games in a series. The All-Star break kind of came at a perfect time to wash that away. The Rangers aren’t good, but they should be better than their record and the Royals have to contend with their two best pitchers in this series. I still think they get the season’s second half off to a good start and take two of three.