The Royals will wrap up their road trip with their one and only visit to Baltimore to take on the Orioles, who have fallen quite far since the last time the two teams faced off in mid-May. Back then, the Orioles were one of the best teams in baseball, but a three-game sweep at the hands of the Royals sent them down a bad path. They’ll hit plenty of home runs, but they don’t walk much and they strike out a lot, so if they’re not hitting the long ball, they’re in trouble. Their starting pitching is a massive disaster, and there’s at least a chance their solid bullpen is broken up by the time this one starts. 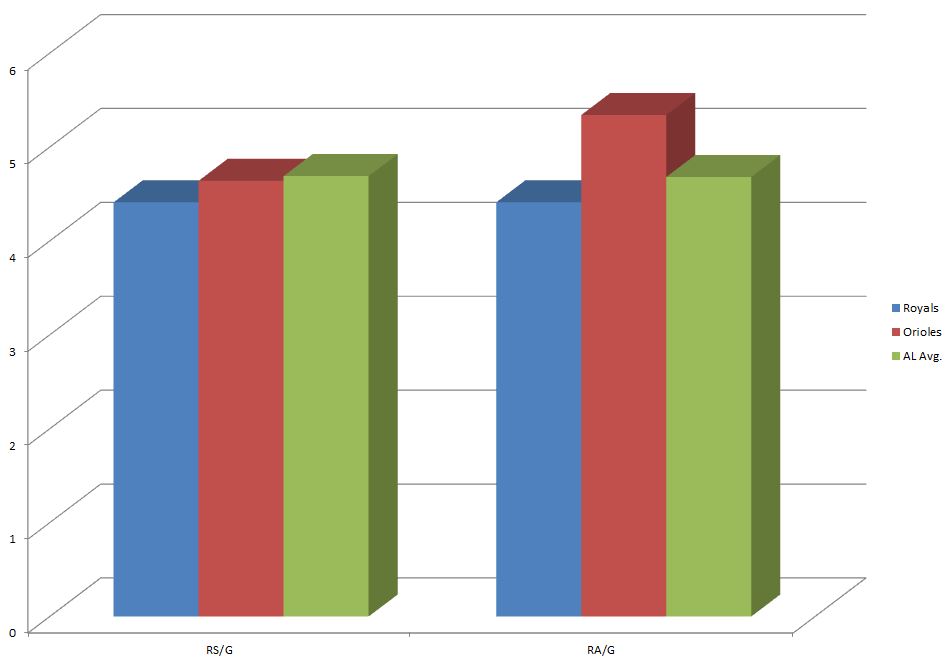 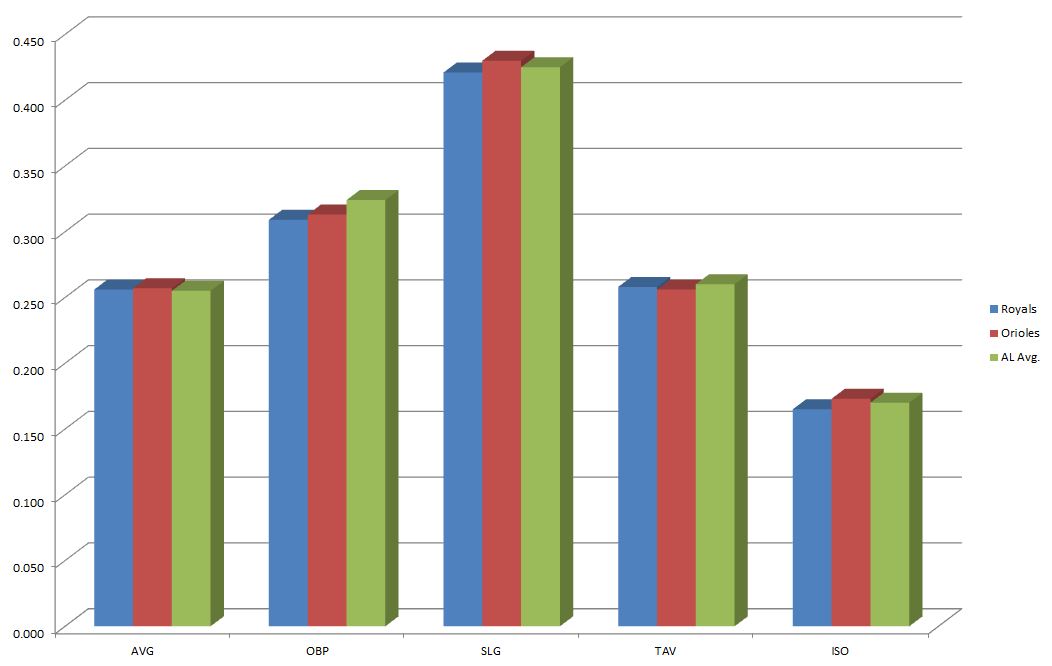 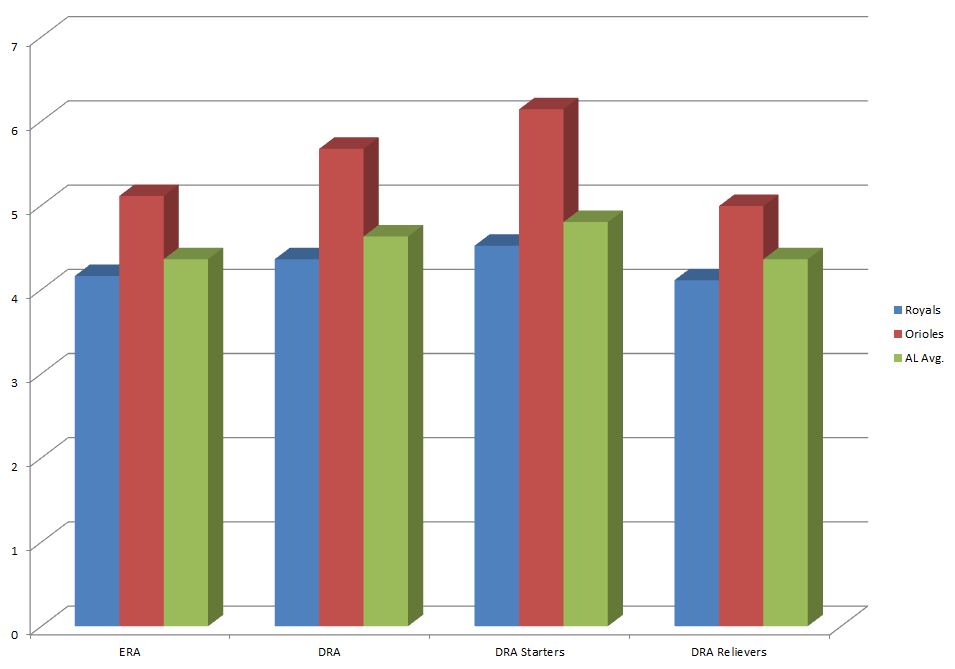 The deal the Orioles signed Jimenez to prior to the 2014 season is thankfully for them almost over. After losing his starting job earlier this season, necessity bumped him back to the rotation. It would be difficult to say he’s been good in his second chance, but he is coming off a decent start and has only walked four batters in his last three starts, so that’s something. All in all, allowing 76 earned runs in 98.2 innings is pretty striking.

Jimenez was once blessed with some of the best stuff in baseball. He doesn’t have that anymore. His once electric fastball and sinker are now pedestrian, averaging around 91 mph. His slider that used to be deadly doesn’t have the movement it once did. And his splitter just doesn’t do what it used to. While the movement on the slider isn’t nearly as good as it used to be, it still gets results with a .186 average allowed and .356 slugging percentage. Everything else has been hit hard with the exception of his four-seam fastball that he doesn’t use that often. He’s been a really good matchup for Eric Hosmer, Brandon Moss and Lorenzo Cain, with all three posting an OPS over 1.000 against Jimenez. Lefties have hit .286/.370/.632 off him this season, so I would fully expect the Melky Cabrera experience to begin with him taking playing time from Jorge Bonifacio.

Duffy has been really good his last three starts. The numbers don’t necessarily show that after he tired out in the middle innings of the crazy hot game against Detroit, but Duffy has walked just three batters in five starts since coming off the disabled list. If he can maintain the stuff he had in his last time out against Detroit, he should be able to rack up the strikeouts against the Orioles. They strike out a lot against lefties.

Bundy looked like he was going to break out after a solid first full season last year, but he’s seen his strikeout rate drop just enough that he’s really struggled. It’s been an especially tough go over his last few starts with a 7.38 ERA in his last eight appearances. In his last start, he gave up seven runs on eight hits in 5.1 innings against the Astros. It’s been a rough go for the one-time top prospect.

There’s a good chance there’s something wrong with Bundy, based on velocity. Last year, he averaged 95 mph with his fastball, but this year, that’s dropped more than two miles per hour. Some of that can be attributed to starting full-time compared with coming out of the bullpen, but not all of it. He also uses a sinker, changeup, slider and curve, so it’s very difficult to know what’s coming from Bundy. The issue is that the fastball has been hit hard, and especially by lefties. Hosmer has hit .355 with a .529 SLG on fastballs from right-handed pitchers, so he should have a nice time in this one. Whit Merrifield could struggle here as Bundy throws that fastball a lot, but he’s only hit .209 with a .374 SLG against four-seamers from righties.

Maybe the most striking Kennedy statistic of the year is that he hasn’t allowed a home run in his last two starts. He’s had varying results with one very rough start and one very good one, but he’s been quite good overall in his previous eight starts with a 3.26 ERA. That spans 47 innings where he’s struck out 41 and walked 13 with just 35 hits allowed. All in all, he’s been very impressive, but I think the Orioles power and Camden Yards could pose a problem for him in this one.

What a disastrous season for Tillman as he heads to free agency. He started the year on the disabled list and hasn’t hit his stride at basically any pointafter putting up really nice numbers in 2016. He was roughed up in his last outing against the Rangers, giving up eight runs on nine hits in just 4.1 innings. Maybe the most striking thing is that he’s only gotten double-digit swinging strikes in three out of 14 outings this season. That’s not good, if you were wondering.

Tillman is mostly fastballs with a four-seamer, sinker and cutter. Those three pitches account for about three-quarters of what he throws with a changeup and curve making up the rest. His changeup has been his most effective pitch this season. He’s allowed a .500 average on his curve ball, so this game stands to be a good bet for Bonifacio to get going again as he’s been so good against curves from righties with a .409 average and .909 slugging percentage in 22 at bats that have ended on that pitch. There aren’t a lot of splits that make Tillman look good, but he’s been especially bad early in games, allowing a .400/.476/.636 line the first time through a batting order and a .432/.512/.743 line on his first 25 pitches. I imagine the Royals will do everything they can to get going early because that’s a proven way to get him.

Vargas struggled in his two starts sandwiching the All-Star break, but was a little better against the White Sox a couple starts ago and then went six strong innings against Detroit his last time out. His strikeouts have mostly disappeared, but he was able to get 10 swings and misses against the Tigers, and the Orioles issues against lefties could come into play here if he has his changeup working. The Orioles, as a team, have really struggled against the changeup, so this could be a big start for Vargas.

I think the Royals are clearly the superior team here, but games in small parks are weird. My guess is the Royals take two of three, but I’m not sure anything other than an Orioles sweep would really surprise me in this series.