If you were asked to describe the Royals’ offense, one of the first words you would probably mention is “aggressive.” You would probably cycle through the entire dictionary before coming up with the word “patient.” The Royals have never been a patient team. Their offense is once again last in the league in walks, and they once again lead the league in swing rate. Watching the Royals swing at pitches is a part of the viewing experience. When I turn on the television for a Royals game this season, I’ve expected to see a lot of swings, and yet, they’ve somehow exceeded my expectations.

In the last few months, it seemed like the Royals – as well as other teams – have been swinging at 3-0 pitches more frequently. As it turns out, my eyeballs did not deceive me. The MLB average for swing rate on 3-0 pitches this season is 9.5 percent, up from 8.7 percent last year, and 7.9 percent in 2015. Over the course of the season, that difference amounts to a few extra 3-0 swings per team, if it’s divided equally. In reality, it’s not divided equally. Before showing you this year’s top numbers, let’s look at the leaderboard from 2016.

As expected, Kansas City was among the leaders last year. Now, check out the top five teams in 3-0 swing rate this season.

The Royals are not only number one, they’re lapping the field. In the last five seasons, no team had even surpassed a 3-0 swing rate of 16.5 percent until this year, and while the Dodgers are certainly doing their part, they still have a long way to go to catch up to Kansas City. (For those curious, the Royals have been in the top three in three of the last five seasons, but were below average in this metric in 2013 and 2015.) 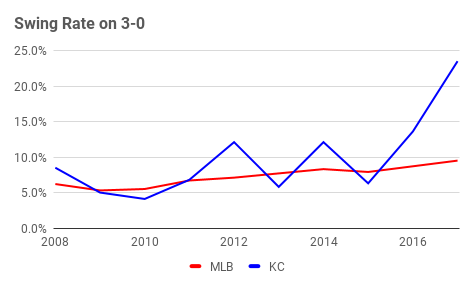 I suppose if you’re going to be aggressive, BE AGGRESSIVE. The Royals are not to be bothered with taking pitches. Why wait for another pitch when there’s a perfectly fine baseball coming near the plate now? Carpe baseball, and what have you.

Now, I do think there’s something to be said for going after a hittable pitch, and with the Royals having some power in the lineup at the expense of contact, it makes some sense to take a big hack on a pitch in the nitro zone. The problem is that the Royals haven’t done nearly enough damage on those hacks.

As a team, they’re hitting .400 with a .733 slugging percentage on balls they put in play on 3-0. Those are really good numbers in most situations! But in this situation, those numbers are much less good. They’re tied for 19th in average, and 18th in slugging percentage among all 30 teams.

This isn’t to say 3-0 pitches should be auto-takes. The Dodgers are easily the best team in baseball, and they’ve taken more 3-0 swings than anyone. They’ve simply done more with those swings than the Royals have, with a .435 average and 1.043 slugging percentage. And because they have gotten into far more 3-0 counts total, they’ve had more opportunities to draw the walk or do some work.

Among the Royals, Eric Hosmer is the most aggressive in 3-0 counts. He’s taken ten swings at pitches in that situation. Here are those pitches: 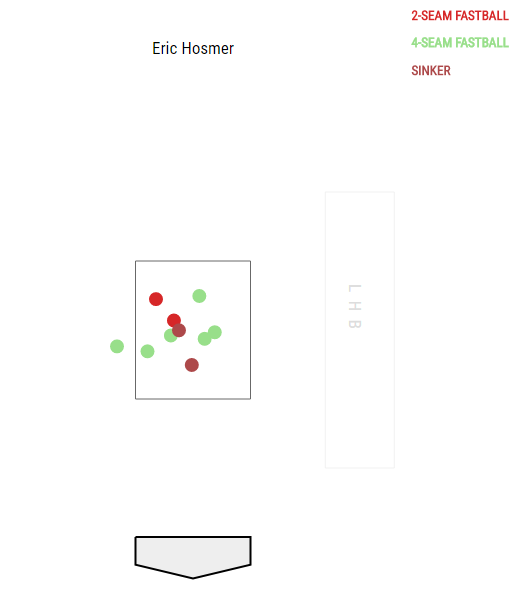 For the most part, those are some meaty, meaty pitches. Here are the results of those swings: 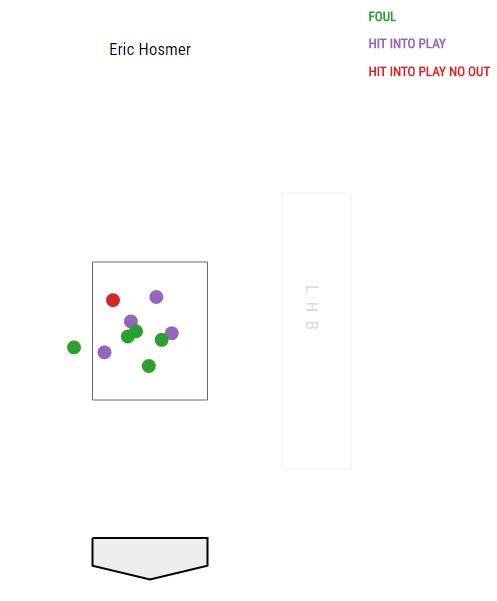 Five fouls, four outs, and one measly single. I should point out that the five balls put in play averaged 98.5 mph off the bat, so he is making solid contact. That’s still five foul balls, and fair or not, 3-0 swings are judged on the result. Aggressiveness is good until it isn’t, and thus far it hasn’t worked out for Hosmer or the rest of the Royals.

Mike Moustakas has taken eight hacks on 3-0 pitches, fouling off four, making outs on two, whiffing on one, and collecting one hit. Lorenzo Cain and Salvador Perez have had a bit more success, totaling four hits among their 12 swings. No other Royals have hits on 3-0. That’s six hits on 39 swings at some of the more hittable pitches a big league hitter is going to see.

Those are missed opportunities in a season full of missed opportunities. The American League is full of flawed, mediocre teams, and while the Royals are still in good position to make a run to the playoffs, they’ve had chances to separate themselves from the pack and haven’t done so. They’ve had chances to gain ground on yet another underachieving Cleveland squad, but haven’t done so. Not taking advantage of a 3-0 cookie can be just as frustrating as the Royals current position.

Despite all of that, these Royals are still the Royals. They’re going to keep taking some healthy cuts at 3-0 pitches, and they’ll probably pick up a few more doubles and dingers. Those extra-base hits won’t make up for the missed chances earlier in the season, but they likely will give the Royals more chances to keep the rest of the season going for just a bit longer.

3 comments on “Royals are Taking Aggressiveness to Another Level”

Salvy will be back next year, but will bidders on Hoz and Moose be as tolerant of their 3-0 hacktastic ways? Something for agents to consider as we head into a winter of discontent. I have always wondered if Ned’s coddling these guys is part of the secret to his success with them. Will new managers/teams do the same? Maybe a reason for these guys to consider staying with Royals. And can poor Esky get a day off? Another part of the Nedly magic I guess.

Just curious, do you know the end results for those at bats that started 3-0? After the foul balls were they successful putting the ball in play on subsequent pitches?