Grip it and rip it.

In baseball 2017, strikeouts are on the increase. Likewise the home run. Across the game, batters are digging in and taking their hacks. If they make contact, the exit velocity and launch angles confirm that the ball is flying out of the yard at a record clip. If they miss…well, there’s a stiff breeze blowing out to center. Meanwhile, walks have been becoming unfashionable. (Not necessarily this year, but the overall trend shows they’re on the decline, with a rebound this year.)

The game has evolved in the period of just a couple of years. Yet one of the interesting things about baseball is that a change in results doesn’t necessarily mark a change in the process. With all these big swings resulting in home runs and strikeouts, it would seem a logical conclusion that batters are swinging the bat with an increased frequency. That is the case, but there’s been a gradual change. 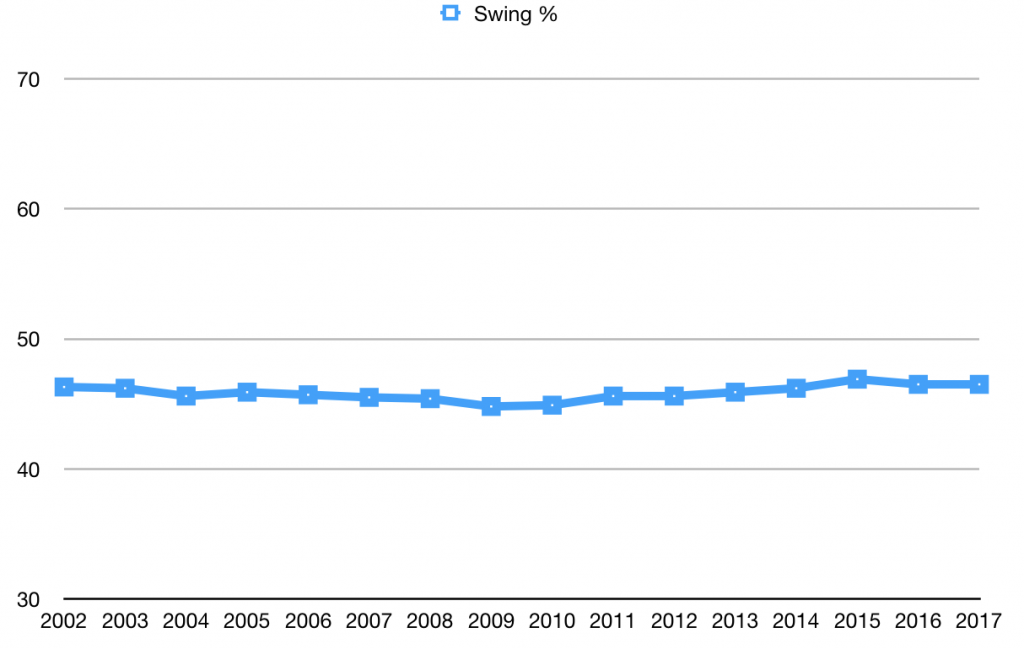 The last three seasons are the highest when it comes to swing rate with 2017 still trailing the high water mark found in 2015.

How about individual teams in specific seasons? Who are the kings of swing?

Ahhhh. We’ve stumbled on to the whole point of this post. The Royals are not only leading the league in swing rate in 2017, they are poised to become the most hactastic team in history. (Or at least since 2002 when swing rate was first recorded. But given the trends, probably history.)

What does it all mean? Probably not a lot if we’re being honest. Their team TAv is .256 which isn’t great and ranks 23 in the league. Using more traditional stats, their team OBP is .311. That ranks them 27th out of the 30 teams. Their offense was more productive in 2015 when they ran away with the division and the eventual World Championship, but they still managed to win the AL pennant with an even less productive offense in 2014 than the one they possess now.

The good news is, they’ve at least joined the home run revolution. Their team .422 slugging percentage is just a few clicks below the league average of .427.

Let’s check the Royals batters who have had more than 100 plate appearances in a Kansas City jersey this summer and place their current swing rate up against their career marks to see who the outliers are.

The guys going up and hacking more than they have in the past are just two of the most productive hitters based on TAv. Moustakas has posted a .295 TAv, good for second best on the club. Salvador Perez owns a .274 TAv which ranks fifth. In fact, the only players who have seen their swing rate decline below their career averages are newcomers Brandon Moss and Jorge Soler, along with backup catcher Drew Butera. It’s not difficult to see how the Royals have made such a jump are are on pace to set a PitchF/X era record for swing rate.

The Moustakas difference between his career rate and 2017 is obviously the most striking thing about the above table. It’s even more striking when you consider in his abbreviated 2016 season, his swing rate was 42.1 percent. His swinging strike rate is approaching a career high of 10.7 percent, but his overall strikeout rate of 15.1 percent is still below his career average. Again, this is a hitter who has completely transformed himself since being pinch hit for in the 2014 Wild Card game. The aggressiveness works.

On the other hand, you have someone like Alcides Escobar. Sure, it was a hot road trip, but we’ve seen enough to know it’s not sustainable. His swing rate has generally increased every season he’s been a regular in the big leagues. He’s taken a slight step back if you can imagine, down from last year’s career high rate of 52.9 percent. In his case, it doesn’t really matter. His 18 percent strikeout rate and 2.5 percent walk rate are both the most extreme of his career. While an aggressive approach at the plate suits someone with the talent of Moustakas, it’s the wrong path for Escobar. But we’ve been writing about that since 2011.

There is a lot to digest from the tables above. However, there just isn’t any correlation between swing rates and success. Baseball isn’t a cookie-cutter sport where what works for one, works for all. Still, it’s interesting to break down individual approaches, especially when the team as a whole is on a record setting trend.

The Swinging Royals provides an offense that can work. Now about that August pitching…