PECOTA loves Nate Karns. Well, as much as PECOTA can love a pitcher on the Royals staff.

It’s with good reason. Karns, of all the Royals starting pitchers, seems to have the most untapped potential.

It seems odd to be dropping an “untapped potential” into a profile of a 30-year old, but Karns’s road to Kansas City has been a bit of a winding journey. He’s made appearances for four different teams and thrown just over 300 innings in his big league career. Almost half of those innings came in 2015 when he was starting for the Rays.

A strong strikeout rate, an ERA a tick below league average, and the WARP is projected to be the highest on the pitching staff. See what I mean about PECOTA loving Karns?

It may be a little difficult for you to buy a projection that optimistic. Last year, his first with the Royals as the bounty in the Jarrod Dyson trade, Karns made just nine appearances and threw 45 innings before injury short-circuited his season. He underwent Thoracic Outlet Surgery (the surgery du jour for pitchers in the non-Tommy John Division) and is supposedly progressing well after starting his offseason throwing program in November. They even allowed him to keep the rib!

So why is PECTOA so bullish on a pitcher who made just a handful of starts in 2017 and has had yet to throw an entire major league season as a starter? Let’s start with the curve.

Of regular practitioners of the curve, the knuckle curve in particular, only two starters throw the pitch with more velocity than Karns. From Statcast, here are last year’s top five on velocity with the curve.

With the curve, Karns doesn’t generate a ton of spin relative to the hardest throwers, but the velocity of the pitch seems to be enough to generate a sharp 12-6 drop that completely befuddles hitters. Last season, a full 48 percent of curves that Karns threw that hitters offered at were missed. On top of that, 28 percent were fouled off. That’s a wicked low contact rate on his curve. The Karns plot is just to the left of his name, a tick under the 50 percent line. 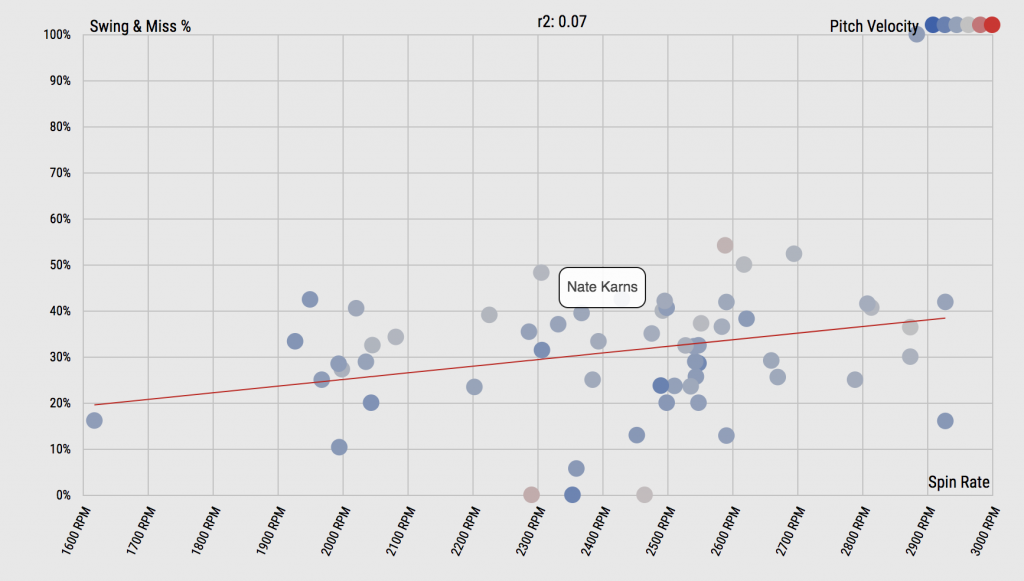 Given the swing and miss proclivity of the Karns curve, it’s little surprise it was his most effective pitch. Opposing batters hit just .167 on plate appearances ending with a curve. They slugged a paltry .264 with a .097 ISO. Of the 51 strikeouts Karns registered in his abbreviated season, 36 of them, or just over 70 percent, came courtesy of the curve.

Over the last couple of seasons, Karns has leveled out his usage on the curve. It used to be, he would break one off more frequently against right-handed batters. Now, hitters from both sides of the plate see it with regularity. If Karns is ahead in the count, it’s a 50-50 chance the next pitch will be a curve, no matter what side of the box the hitter is positioned. It’s the same rate when there are two strikes. To say the curve is Karns’s put-away pitch is underselling it.

What happens in the rare instance where a hitter puts the Karns curve in play? Good things. Over 61 percent of all curves put in play off of Karns are hit on the ground. That’s a better than 3:1 GB/FB ratio. In today’s game with the ball being, ahem, juiced, that’s exactly what you want out of a pitcher.

In this day where smart teams crave pitchers who get strikeouts, one plus pitch does not a starter make. And this is another reason why PECOTA loves Karns so much. His change-up is effective as well.

The change features about 7 mph difference from his fastball. Karns extends his arm a little further from his body than his other pitches when he unleashes the change and lowers his slot on the vertical plane. The pitch comes out of his hand initially looking like it could be the curve, but rolls with arm-side fade. It’s not the same kind of swing and miss pitch as his curve, but it’s damn effective. He registers a just under 30 percent whiff rate on swings and a foul ball rate just over 30 percent.

This is the ground ball pitch. Last year, Karns got a worm burner on just over 63 percent of all balls put in play against his change. Add it all together and you have a pitcher who generated a ground ball rate of just under 50 percent, the highest of his career. When hitters are making contact, it’s not that strong. The average exit velocity against his change was 81.1 mph which was Jason Vargas territory.

Where Karns did get in trouble last year was with the gopher ball. (Join the club.) He surrendered nine in his 45 innings of work in 2017. A couple of things to note. First, his HR/FB rate was an elevated 19.6 percent. It’s fair to expect some normalization should he be healthy enough to pitch an entire year in the rotation. Think somewhere between 12 and 14 percent. Second, six of the nine home runs came off his fastball. Of those, four came on the first pitch of a plate appearance. A fifth was offered on a 3-0 count to Joey Gallo. The Karns fastball is a decent pitch, but when a hitter is setting dead red, there’s a danger it could leave the yard.

Still, the Karns arsenal, with two plus pitches that play well off the fastball, suggests a pitcher who can step forward in a rotation desperately seeking quality arms. The most important question surrounding Karns this spring is how well he progresses off his thoracic outlet surgery.  Should he see a full recovery, there’s no reason to think the can’t fulfill his PECOTA projection and challenge for the role of best starter on the staff. Despite his age, the potential upside is still very much in play for Karns.

Tags: Nate Karns |
Craig Brown
Follow @CraigBrown_BP
Craig has been covering the Royals at various outlets for 14 years. His work has appeared at various websites, including Sports On Earth, Baseball Prospectus, ESPN, The Hardball Times, and SB Nation. Reach him at craig.brown@baseballprospectus.com.
read more from Craig Brown

Interesting article, thanks form the info. I believe Karns starts the year at AAA for what will be called building up his arm strength. I think Hahn will start inn the rotation in the majors, Karns has an option. If course, that could go out the window of Hammels is traded (fingers crossed).