The streets are still teeming with the Small Sample Size Cops. In this kind of statistical police state, it’s dangerous to cite any kind of example from these first eight or so games, lest you be set upon by those who would throw scorn on your numbers.

Yet it’s not too early to look for some trends. Or some explanations. Before Monday’s offensive explosion against Seattle, the Royals were averaging just 2.29 runs per game. You are probably aware their first two victories of 2018 were courtesy of a pair of 1-0 shutouts. (They came this close to a third, but let’s not talk about this. Sunday’s result still stings.) This is almost a carbon copy of the offensive malaise from the first couple weeks of 2017. It’s all too familiar.

Meanwhile, the Royals are attempting to turn the launch angle revolution on it’s head. In their own way.

Through their first eight games of the season, the Royals are tied with baseball’s highest average launch angle.

This actually is a continuation of a trend that began last year. Over the course of 2017, the Royals team average launch angle was 13.1 degrees, the third highest in baseball.

This is where it helps to search for some context.

From Baseball Savant, this is the Royals current batted ball profile as based on launch angle. 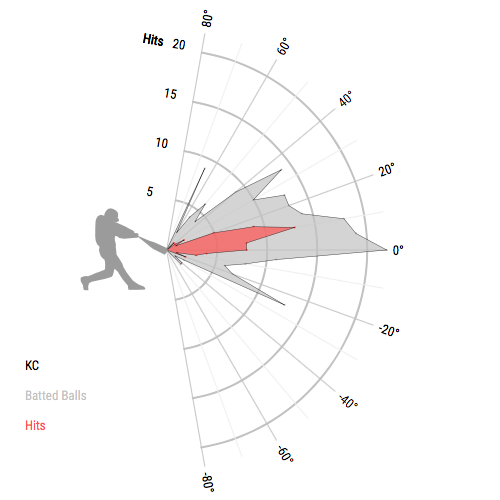 That looks fairly healthy. There’s still a component of ground balls (hits with a launch angle of less than 10 degrees), but you’re never going to eliminate those completely. Obviously. Meanwhile there’s a strong profile of line drives. In fact, their current line drive rate according to Fangraphs is 21.4 percent. This is a year after the Royals had baseball’s second highest line drive rate at 22.3 percent.

Compare the chart above to their launch angle from last summer: 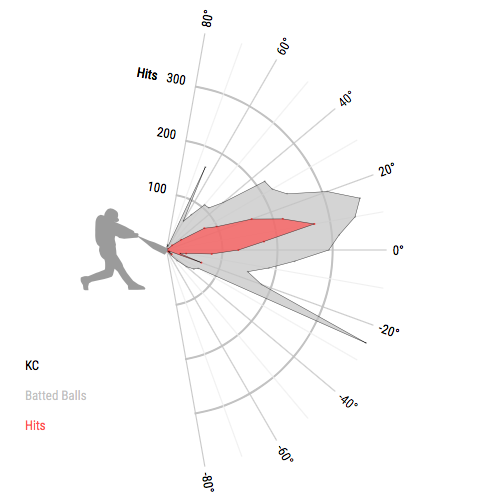 There’s a healthy block of line drives, along with an incredible spike of a -25 degree angle. (Perhaps losing Eric Hosmer will result in what we see from the first table where that spike isn’t as pronounced.) Last year the Royals finished with a .295 BABIP, which was just below league average.

This year, despite hitting the ball on the nose and in the air, the Royals have the third lowest BABIP in baseball, ahead of only Cleveland and the Dodgers. See where this is going? Ah, yes… the frigid temperatures of the first full week of the season. Maybe there’s something to that, after all. It’s damn difficult to barrel the baseball in sub-freezing temperatures. Their batting average on balls in play was .238 heading into Monday. Again, after the Royals bats came out of cold storage into not-as-cold storage they bumped up on spot on the leaderboard to a .263 BABIP.

Going back to the launch angle table, as you would expect, the five teams represented above all have healthy fly ball rates. In fact, the Twins, Indians, Phillies and the Royals all hit the ball in the air at a clip above 40 percent in this young season.

So many fly balls, yet when Mike Moustakas left the yard on Monday, it was only the Royals third home run on the year. Again, this is where we can look at some of the numbers and predict (and hope) for some movement toward the mean. Last year, according to Baseball-Reference, the Royals had a 8.6% HR/FB rate, well off the league average clip of 9.9% HR/FB. This year? The Royals own a measly 3.6% HR/FB rate. Cold weather? Good pitching? Overmatched hitters?

It could be a combination of all of the above.

I’m always skeptical when we hear explanations for slow starts. Blame the cold weather? It seems so convenient. Yet in this case, it sure feels like there’s something to that argument. The Royals have played in some brutal conditions to open the year and they are definitely reflected in the numbers and rates. It will improve. It will get better. Will this team turn into an offensive juggernaut? Highly unlikely, no matter the temperature. But they aren’t as bad as we have seen in the first week and a half. A warming trend is coming.