The Royals get to take on one of their fellow basement dwellers this weekend in what’s become a four-game set due to the postponement from a couple weeks ago. Of course, the Royals will really have to do some winning this series in order to actually be on the same level as the Tigers, who have been about as bad as expected, but not as bad as the Royals. The Tigers have struggled to hit long balls like the Royals (with similar weather struggles), but their pitching has been mostly surprisingly good. I still wouldn’t trust their bullpen, but it’s worlds better than what the Royals have put out there, which is weird to say. 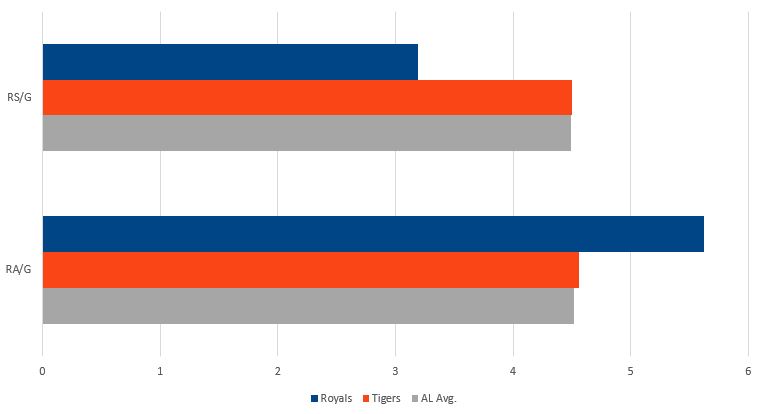 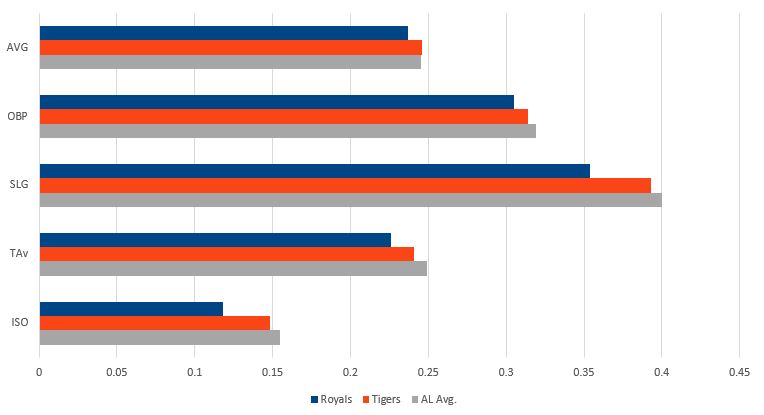 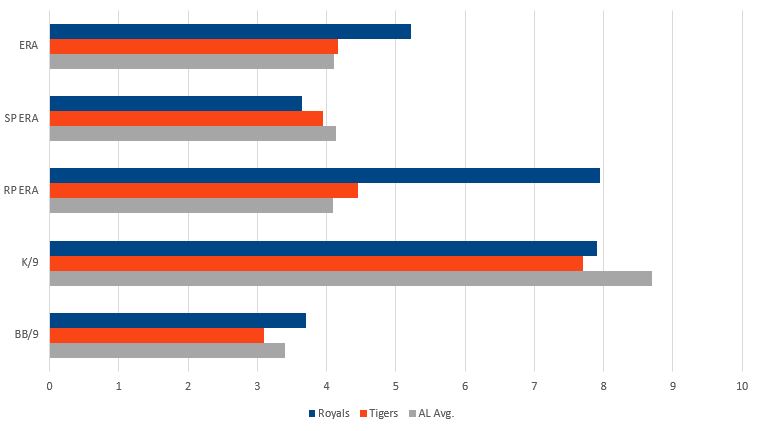 Fulmer has incredible stuff and has looked very much like an ace in the making throughout his brief career, but there’s always been something missing. And then with an injury that cost him his September, he’s come back this year and has continued a troubling trend of not missing enough bats with his swinging strike percentage dropping from his rookie year to last year and so far there’s been a significant drop this year. Some of that might be a little by design as he’s flipped from way more four-seamers to sinkers his rookie year to the reverse this season. His slider is still fantastic, but he’s not getting to two strike counts as much as in his rookie season. Even so, he’s still very good and could give a Royals team that’s been struggling to make contact at times recently. In the young season, the big issue for Fulmer has been lefties. They’re hitting .351/.385/.676 against him, so I imagine Ryan Goins will get a start in this one.

Hammel has actually some pretty similar numbers to Fulmer so far this year, but he’s getting more swings and misses. He struggled in his first start of the year, which was against the Tigers because he couldn’t handle the third time through the order, which is no surprise. His last two starts have been better when the lineup turns over a third time, allowing just a .200/.273/.200 line. Now, it’s two starts and 11 plate appearances, but it has to start somewhere. I still wouldn’t trust him a third time through the order, but I fear with the bullpen issues and the double header that Hammel will get a chance to last a lot longer than he should in this game. Hammel has been hit a bit by the Tigers, but not for a lot of extra bases, which is interesting. Still, Candelario and Cabrera both have had success against him, so they’re ones to watch.

Norris gets the spot start here after starting the year in the bullpen for the Tigers. His spot on the big league roster might depend on this game, which seems like it could go one of two ways for him. Either he relishes the chance and earns his spot or he implodes and the Royals can take advantage. Given the evidence, I’d say there’s a decent chance he can pitch poorly and still get good results due to facing the Royals, but you never know. After breaking out in 2016, I expected some big things from Norris last year, but he really struggled and now his role is tenuous at best. The odd thing about Norris is that he really struggled with lefties last year. The worrisome trend with Norris is that his fastball velocity is WAY down this year, averaging just 90-91 on it after averaging 93-94 last year. He’s throwing a ton of sliders to compensate, but it just doesn’t work well enough.

Junis was magical in his first two starts, but hit a wall against an excellent Angels team in his last start, falling prey to the home run ball. I think he has a good chance to bounce back against a subpar offense that he’s already pitched very well against. The key for Junis this year has been his slider. He’s allowed just four hits off it in 31 at bats that ended on it this year and has struck out 12 with it. Detroit hitters went just 1 for 12 against it with three strikeouts when they faced Junis in the opening week of the season, so expect that pitch to be his bread and butter in this one. The only hitter he’s really had trouble with has been Candelario who has three hits in five at bats against him. The Royals are really going to regret not getting him in the Wade Davis deal, I fear.

I once really wanted the Royals to go after Fiers as I thought he was sort of a better version of Chris Young. Then home runs started flying out of the park at record rates and I was glad they didn’t sign him. As sort of a scrap heap type pickup, though, he’s had a nice first couple starts with the Tigers, showing good control and some swing and miss that he hasn’t had since his National League days with Milwaukee. He also appears to have altered his game a fair amount, at least through his two starts, getting a ton of ground balls so far this season. He doesn’t seem to be throwing different pitches or anything, so it’s probably just an anomaly, but for such a noted fly ball pitcher, it’s at least interesting. At least so far, getting to Fiers means getting to him early. He’s allowed a .308/.400/.615 line in his first 25 pitches. That bodes well for a Royals offense that has gotten going early in the past this season. Mike Moustakas is 4 for 8 in his career against him, and I have a feeling he has a big game against him in this one.

Duffy is coming off his best start by far, and it was very encouraging. He still walked too many batters, but he was getting strikeouts and his velocity was there all game long. If he can continue pitching like that, he’ll be just fine and his trade value will be just fine too. Of course, pitching on three days rest is an interesting test for a guy who has struggled with some injury issues. With some right-handed thunder in the Tigers lineup, his changeup will be especially important. So far this year, opponents are hitting .158 with a .368 slugging percentage against it. Surprisingly, his four-seam fastball has been almost as good (.167/.389), though he did allow two home runs on it. He’s had his issues with the Tigers the last couple years, going 4-2 but with a 5.87 ERA in 10 appearances against them. He did pitch quite well in Comerica Park last year, so hopefully he can repeat that in this one.

Liriano has some really quality numbers considering how awful he was last season. Of course, some of it is a mirage as he’s still walked too many and isn’t quite striking out enough. I’m guessing he’s benefited quite a bit from the weather as well with the warmest first pitch coming in at a balmy 37°. I don’t expect his success to continue once hitting conditions begin to resemble baseball weather and the high looks like it’ll be in the 50s for this one. One thing he has done well that will probably continue to some extent is that he’s eaten up lefties, allowing just a .059/.158/.235 line to them in 19 plate appearances. When he was in the midst of revitalizing his career with the Pirates, he used his sinker to get a ton of ground balls, and while he still gets a decent amount, it’s not what it was before and I think that’ll start to hurt him once the ball starts flying a little more. I expect Salvador Perez will come off the DL at the start of the homestand, but he’s 4 for 10 with a double and a homer against Liriano, so maybe they’ll consider getting him off a little early.

If I was a betting man, I’d say this is Skoglund’s last start with Clay Buchholz approaching his opt out date and Skoglund being not so great. He did have his second best start of his career his last time out in Toronto. For what it’s worth, the second best start of his career meant five innings and five runs allowed, so take that for what it’s worth. The Tigers have struggled with lefties in general, but they’ve fared quite well against lefty starters, which is interesting. Skoglund did have his dazzling debut against the Tigers, so maybe he’ll muster up some old feelings, but at this point with him pitching, my greatest hope is that he gets lucky and gets through five with the Royals relatively close in the game. In trying to find a spot, any spot, where Skoglund excels, I found that he has allowed a .182/.250/.455 line with a man on first, so that’s kind of good at least.

These are two bad teams and while the Royals are playing some horrific baseball right now, the tide has to turn at some time. I’m going to be optimistic and say it starts to turn here and the Royals split the four-game set. It’ll be just in time for Perez to return and people can construct a narrative about him even though things probably would have turned even if he wasn’t back so quickly.

Tags: Daniel Norris, Danny Duffy, Eric Skoglund, Francisco Liriano, Jakob Junis, Jason Hammel, Michael Fulmer, Mike Fiers |
David Lesky
Follow @dblesky
I've been a Royals fan since the day I was born, and have had the opportunity to write about the Royals for nearly a decade now. The winning was better than the losing, but the losing is kind of familiar at least.
read more from David Lesky