The Royals welcome the White Sox back to town for a slightly warmer set than what they encountered during the first series of the year in late March. As expected, the two teams are jockeying for draft position and both are sitting with an embarrassingly low number of wins. The White Sox offense has really regressed in the last couple weeks after looking very strong out of the gate. Their pitching is plagued by up and down young starters, bad veterans and injuries. And of course, they’ve dealt with the Danny Farquhar situation, which can’t be easy for a team to see one of their teammates and friends fight for his life as he has. It is so great to see that he seems to be beginning the road to recovery. I think it’s safe to say we’re all rooting for him. 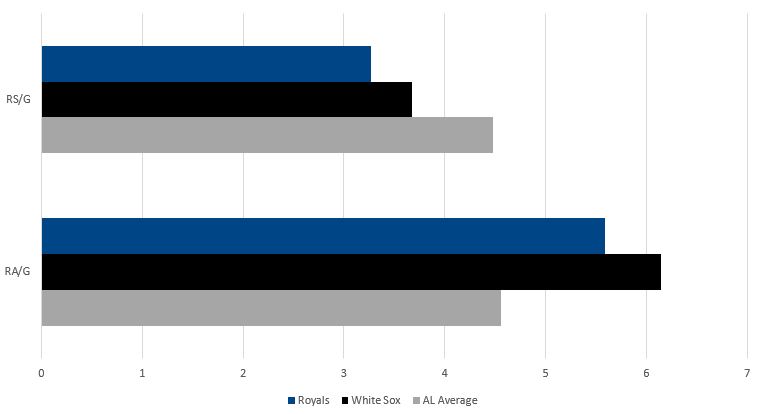 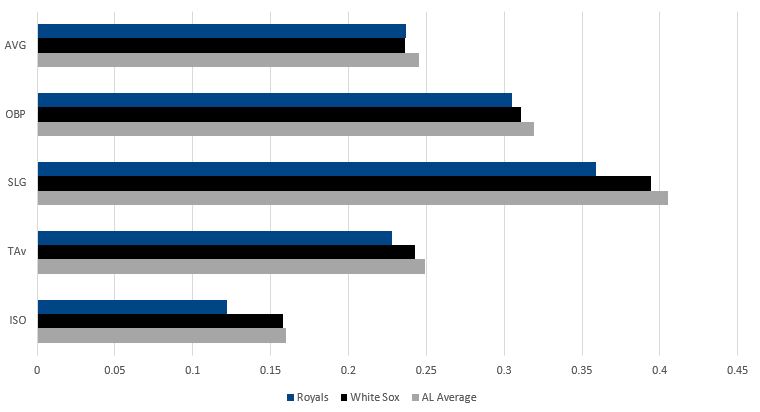 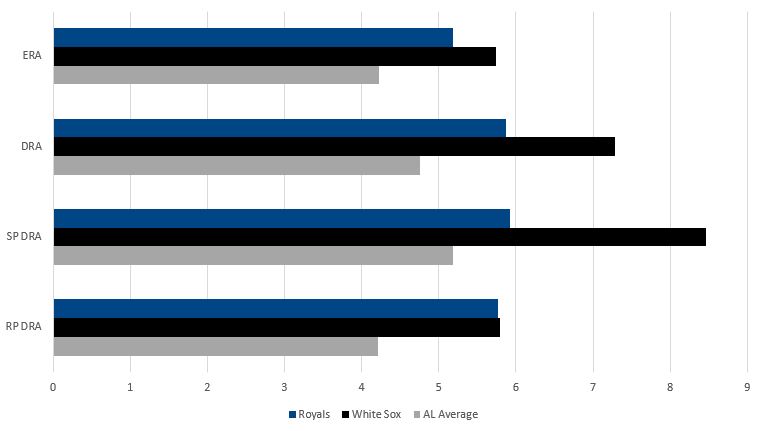 I’m officially fascinated by Giolito. He’s now thrown a few games in the last three seasons and they all have been so different. His first time in the big leagues, he got hit hard, didn’t strike anyone out and walked too many. Then last year when he came to the White Sox, he was tough to hit, had control and at least had a few more strikeouts. And now this year, he’s walked 19 in 20 innings and has only struck out nine. He’s also hit four batters. The guy is an absolute mess. His fastball velocity remains down, averaging less than 92 MPH, but it’s still been somewhat effective, though he’s walked 17 hitters with it. His changeup has been sort of mauled in a limited sample with three doubles given up in seven at bats. He gave up three runs on four hits over six innings in his first start of the year against the Royals, but he walked four and struck out just one. It was a sign of things to come. His last start was brutal with nine runs allowed in two innings to go along with seven walks. Yeesh.

With it late enough in the season, DRA makes its debut on Baseball Prospectus for the year and in the series previews! I think there might be some leveling off it needs to do because I feel like 4.57 is a little high for him. He’s pitched as well as an ace, though. I don’t think he is that, but he’s been really good for almost a half-season of pitching now, going 9-2 with a 3.13 ERA over his last 89 innings dating back to last season with just 14 walks in that time. There’s likely some regression coming, and not just because a 2.03 ERA isn’t sustainable for hardly anyone but because he’s stranding runners at an incredible rate (90.4 percent). Even so, he looks the part of a force in a big league rotation and hasn’t disappointed after a great spring raised the hype on him considerably. This will be the first time in his career he faces the White Sox.

Lopez, also originally from the Nationals, has been almost as interesting as Giolito. The thought was that his big fastball and lacking secondary pitches might play better in the bullpen, but he had a very promising showing after coming up last year because he was able to improve on his control. He also struck out fewer hitters last year, but had a better strikeout to walk ratio in general. This year, he’s striking out almost a batter per inning, but he’s allowed 15 walks in his 24 innings. Of course, he’s only allowed 12 hits. All in all, it leads to some really solid numbers, but I’m not so sure it’s sustainable. Somehow he’s averaging six innings per start with all those walks and strikeouts and hasn’t been overly taxed, but I feel like that’s going to change at some point if the peripherals don’t. But the one thing he has going for him and always will is the fact that his stuff is so good that even when he’s behind in the count, he’s still in good shape because he’s allowed just a .174 average to hitters who had the advantage. Mike Moustakas has taken him deep a couple times and Whit Merrifield is 3 for 9 against him, so they’ve seen him well and are hitters to watch against him.

I officially don’t know what to make of Danny Duffy. His velocity, while better recently, is still down for the season. His command looks like rookie year Duffy. But he’s also been very successful at times. I still think he’s battling an injury, but I’ve been wrong before here. Even though his velocity is down for the year, it’s been better in his last couple starts with his four-seamer averaging 93.6 MPH in Toronto and 93.3 MPH in Detroit. He hasn’t even really been hit all that hard on the whole. It’s just that command has led to way too many walks and way too many grooved pitches, though it’s worth mentioning that he’s only allowed one home run since the Opening Day debacle against these very White Sox. I’d love to tell you that I know what we’re going to see from Duffy in this one, but I don’t think anyone, including Danny himself, knows. Jose Abreu and Yolmer Sanchez are the two White Sox who have hit him best, so watch out for them in this one.

Fulmer is another young White Sox starter struggling with control. He’s thrown 18 innings and walked 10 in them, which is pretty consistent with the rate for his whole career. He’s not especially deceptive, only eliciting two swings and misses in his last start, though he somehow only allowed two runs in six innings in a win over the Mariners. And if we’re being fair, six of his 10 walks came in one start against the Rays early this season, so maybe he shouldn’t be looked at as having control issues. Fulmer mixes a 93-95 MPH fastball with a changeup, cutter and occasional curve. So far this season, hitters have been able to take the fastball deep and have hit .304 with a .478 SLG against that cutter, so those are the pitches to key on. He’s also been hit very hard by right-handed hitters to the tune of a.283/.358/.543 line. That reverse split is in line with his career numbers, so this is a game where Jorge Soler, Salvador Perez and Merrifield might have to carry the offense.

Prior to his last start, Skoglund was coming off the second best start of his career and I mentioned that it’s a problem that the second best start of his career was allowing five runs in five innings. Well move over that start because a new second sheriff is in town. He gave up just four runs in five innings in his last start, so at this rate, he’ll be a competent starter by mid-May. All jokes aside, I still don’t see it with Skoglund. He has middling stuff and average, at best, command. Which is weird because that was sort of his calling card in the minors. The guy has given up 11 hits per nine and has a WHIP of 1.568. There’s some underlying numbers that show maybe he isn’t quite this bad, but if he’s giving up that many base runners, he’s just not going to be successful. Skoglund did face the White Sox last year, allowing three runs on five hits in three innings with two walks.

We will update the White Sox starter with information when it becomes available.

It looks for all the world like Buchholz will make his Royals debut in this one after a couple solid starts in the minors to begin the season. He made two starts last year, pitching just 7.1 innings and allowing 16 hits and three walks. Yikes. But, that said, he isn’t that far removed from a really nice stretch of pitching in 2016, throwing 58.2 innings in his final 19 games with a 3.22 ERA and allowing just 47 hits in that time. Can he be a serviceable big league starter? I honestly don’t know and I honestly doubt it. If his velocity is up into the 90s, he could be successful, and maybe he can figure out how to pitch without velocity like many before him have, but like any reclamation project, it’s a longshot. But hey, they’ve come through before. He’s allowed home runs to Abreu and Anderson in his career, but that’s the only hit Abreu has off him in 11 career at bats.

Remember when the Royals signed Volstad? I barely do. He’s somehow just 31 years old and is now a decade removed from his rookie year that showed so much promise. But he’s still kicking and making starts for a beleaguered White Sox rotation. The one thing he’s done well his whole career is avoiding the free pass, and he’s doing that well again this season, though he’s pretty much as hittable as he’s always been. He relies heavily on two pitches, a sinker and a curve, and both have plus potential. The sinker has done its job this season in his 12 innings of work, limiting opponents to just a .035 ISO and helping him to an insane 68.6 percent ground ball rate. He does throw a changeup, but It’s really only for show. He made his first start on Tuesday against the Mariners and threw just 66 pitches, which is only one fewer than he threw in his only minor league appearance this season, so he’s likely not stretched out to go more than 80 to 85 pitches, which the Royals should try to take advantage of.

I don’t think it’s a guarantee Kennedy makes this start after leaving his last start following a line drive off his foot, but he’s there for now. He was looking fairly sharp before getting hit with that ball and then giving up a monster home run to Travis Shaw. Injury or not, that’s two straight subpar starts for Kennedy after a fantastic start to the season, so there is cause for concern given his rough year last season. This’ll be a big start for him after pitching very well against the White Sox earlier this season in a game Brandon Maurer blew late. Like so many Royals pitchers, Abreu has been a thorn in his side with a .429/.455/.857 line against him in 22 plate appearances. Davidson has also homered against him as has Kevan Smith.

These are two bad teams, and while the White Sox won both games earlier this year, the Royals should have come away with one of the wins if not for Gas Can Maurer. I think this will be a really ugly series and if baseball could award wins at will, both teams might go 0-5, but I’m feeling optimistic here and think the Royals actually take three of five and feel pretty good about themselves following the series.

Tags: Carson Fulmer, Chris Volstad, Clay Buchholz, Danny Duffy, Eric Skoglund, Ian Kennedy, Jakob Junis, Lucas Giolito, Reynaldo Lopez |
David Lesky
Follow @dblesky
I've been a Royals fan since the day I was born, and have had the opportunity to write about the Royals for nearly a decade now. The winning was better than the losing, but the losing is kind of familiar at least.
read more from David Lesky