Four years ago, the Royals and Baltimore Orioles played a series to determine who would go to the World Series. Now, both are fighting for the number one pick in the 2019 draft. Life comes at you fast, I guess. The two teams got to this point in slightly different ways, but here we are with both among the worst teams in baseball. For the Orioles, age and a suspect rotation have caught up to them, and their once-vaunted bullpen is no longer. Part of that is the absence of Zach Britton, who should be returning relatively soon, but some of it is just underperformance. All in all, this series shapes up to be a tickle fight for the ages. 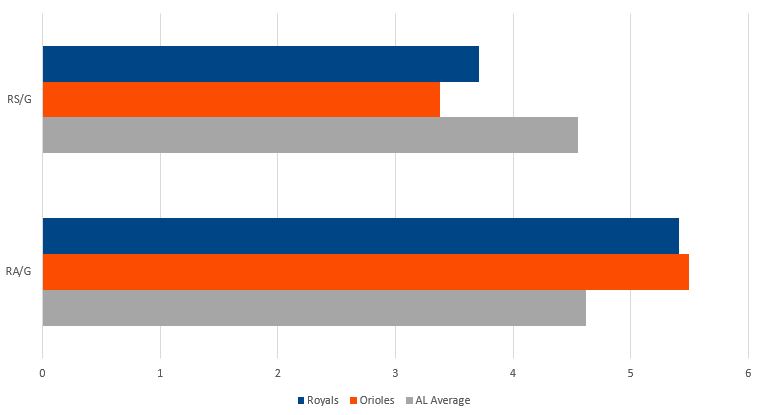 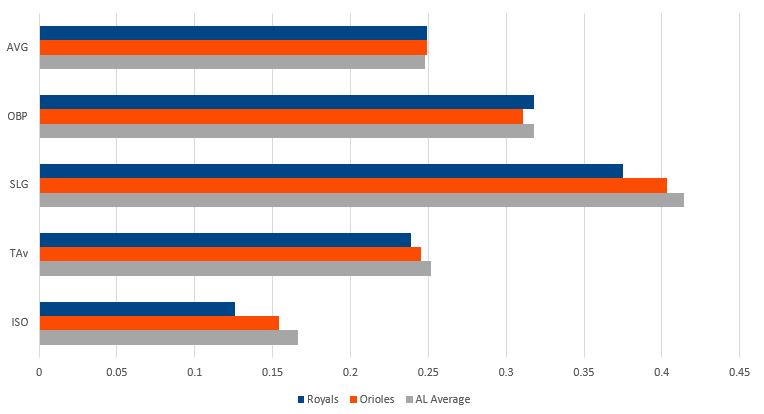 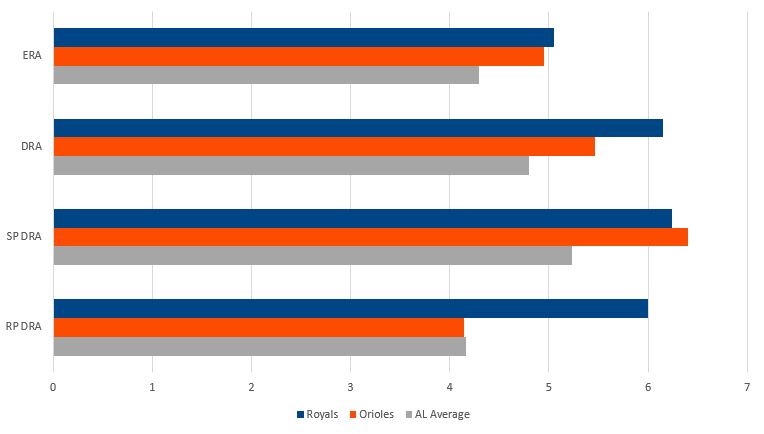 It took a little while longer than expected, but Bundy has developed into a really good starting pitcher. The raw numbers are quite good and 48 strikeouts in those 40.2 innings is really impressive, but I am a little bit concerned about the number of hits he allows. Someone with his stuff probably shouldn’t give up more than a hit per inning. He’s been barreled up kind of an amazing 11.2 percent of the time, and a lot of that is on his fastball where he’s allowed a .319 average and .597 slugging percentage in 72 at-bats that have ended on it. His curve has also been a problem, but the sample is much smaller. He has a nasty slider, which he uses far more to righties and might be why they’ve hit just .202/.256/.440 against him this year. Lefties, on the other hand, have a .342/.395/.468 line against him, so while the righties have supplied the power, lefties have done plenty of damage. My guess is Jorge Soler looks plenty bad against Bundy at times in this one and the offense needs to run through the bats of Mike Moustakas, Alex Gordon and Lucas Duda if the Royals are going to find success in this game.

Duffy is planning to make yet another adjustment and return to the stretch, where he found so much success over the last couple seasons. His home run rate has skyrocketed this season after allowing four to Boston in his last start, and that’s going to have to change if his season is going to turn around. In addition to the home runs, his control and command have been a big problem with his highest walk total since 2015. The strikeouts are mostly there, so that’s not too much of a concern, but he’s put together the terrible combination of very hittable with a lack of control and that’s led to about a base runner and a half per inning. It’s just not a good combination. Duffy has had big-time success against the Orioles in his career, and that comes partially from really holding down Adam Jones (.087/.087/.087 in 24 PA) and Manny Machado (.176/.222/.294 in 18 PA). If he can do that again, he should be in good shape.

What a weird career Cashner has had. He’s been both underrated and overrated. He’s both underperformed and overperformed his peripherals. He’s been good. He’s been bad. He’s been a strikeout guy with iffy to control and a pitch to contact guy with very good control. Last season with Texas, he struck out just 86 batters in 166.2 innings and posted a 3.40 ERA, which is the third lowest of his career. That led him to Baltimore, who probably liked him because of his ground ball rate. He’s upped his strikeout rate to nearly one per inning, but his walk rate has already risen by the same amount. And to make matters worse, his ground ball rate has plummeted from 48.6 percent to 37.7 percent. He’s getting hit and he’s getting hit hard. He still relies heavily on that sinker along with his four-seam fastball with both around 92-94 MPH. The four-seam fastball has been great, but the sinker has been the cause of big problems with a .611 SLG against it. Cashner threw six shutout innings against the Royals last year while with Texas but took a no-decision.

Skoglund, off the best start of his career, looked a lot like the pitcher we’ve seen quite a bit of during his last start. He gave up five runs on eight hits over 4.2 innings, but there was a sign of maybe some good in that he struck out six batters, so maybe that’s something he can continue in this one. The Orioles have performed better against lefties than righties with a .236/.321/.399 line against them compared to .215/.277/.351 against righties, which makes some sense with a lot of their power coming from the right side. Basically, it comes down to Skoglund’s curve in this one. The Orioles, as a team, are hitting .158 against curveballs with a .287 SLG. This’ll be Skoglund’s first career start against the Orioles and at Camden Yards.

Gausman has been an enigma. He has great stuff but has been hit pretty hard the past couple seasons, last year especially. He made 34 starts, but only pitched 186.2 innings, partially because he couldn’t keep runners off base, allowing 10 hits per nine and more walks than ever before. This year, he’s limited the hits and the walks, but at the expense of strikeouts. It’s working to this point with a solid ERA and DRA, so the Orioles certainly aren’t complaining. Gausman works a lot with his fastball and it’s pretty good, averaging about 93 MPH with decent movement. He also mixes in a splitter and a slider, and the splitter accounts for a good amount of swings and misses with a 37.1 percent whiff rate and 31.4 percent strikeout rate, easily the highest of all his pitches on both counts. He’s faced the Royals once in his career, last year, and gave up five runs on nine hits in just 3.1 innings in the game Soler hit the missile to dead center (but it wasn’t against Gausman). He did allow a three-run blast to Moustakas, so look for Moose to try to recreate that magic.

Ian Kennedy continued down the path to a very good season in his last start against Detroit, lowering his ERA to 2.92 and while the DRA is still high, a lot of the peripherals are very encouraging. His strikeout rate is up a bit from 20 percent last year to 21.7 percent this year, and his walk rate has dropped a ton, from 9.3 percent last year to 6.8 percent this year. The one area where regression seems likely to hurt him in his strand rate where he’s left 81.5 percent of runners on base, though that never did come down in 2016, which was a very solid season for him, so maybe he can maintain it. I wouldn’t count on it, but maybe. Kennedy has made three starts in Baltimore in his career with one coming last year when he gave up four runs on eight hits in four innings. Somehow he didn’t allow a home run, though, so I guess that’s sort of a victory. While there isn’t much in the way of experience between Kennedy and really any Orioles hitters, he has limited Pedro Alvarez quite well. In 21 plate appearances. Kennedy’s curve might be a weapon in this one, for the reasons Skoglund’s could be, but if his changeup is on, it could be just as deadly as the Orioles are hitting .208 against changeups this year with a .309 SLG.

In all, these are two bad teams, but I think the Royals are a little better. Normally I’d say that’s two out of three for Kansas City, but they’re both in Baltimore and facing the Orioles two best starters this season, which tips the scales for me, so I think the Royals claim just one of three this week.

Tags: Andrew Cashner, Danny Duffy, Dylan Bundy, Eric Skoglund, Ian Kennedy, Kevin Gausman |
David Lesky
Follow @dblesky
I've been a Royals fan since the day I was born, and have had the opportunity to write about the Royals for nearly a decade now. The winning was better than the losing, but the losing is kind of familiar at least.
read more from David Lesky