It’s now on to Texas for the Royals where they’ll take on the worst team in the AL West in a four-game battle that could have major ramifications on the 2019 MLB Draft. The Rangers are one of the worst hitting teams in the league but have sequenced well enough that they’ve scored a few more runs than the Royals in spite of being considerably worse in both average and on-base percentage. Their starting staff has been okay with contributions from some veterans, but their bullpen has been less than okay. I see Texas as more of a bad team than a horrible team, but they have horrible tendencies, so this might be a really ugly weekend of baseball. 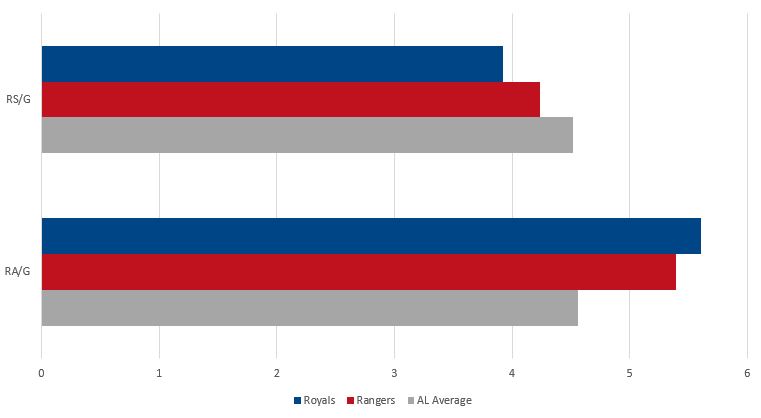 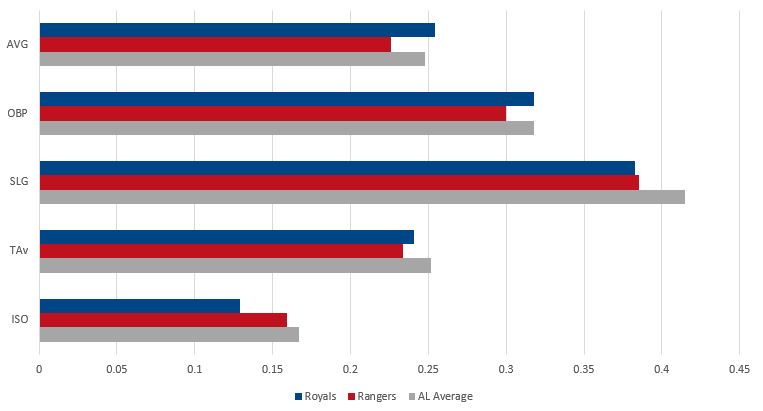 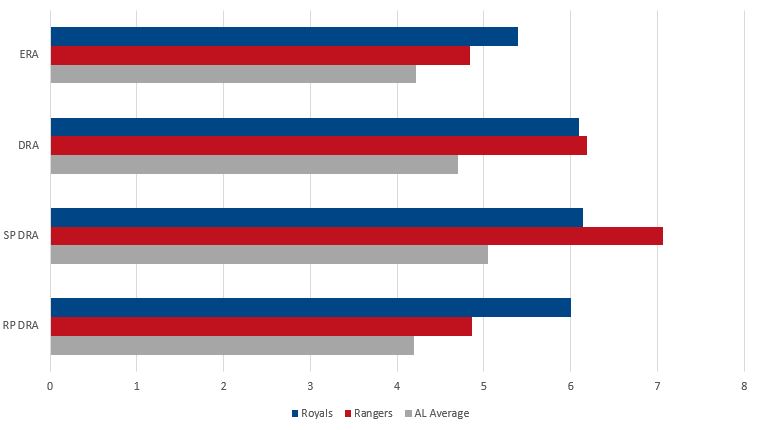 Bibens-Dirkx made his much awaited big league debut (for him) last season at age 32 and wasn’t horrible, I guess. He gave the Rangers some important innings when they were bitten by injuries (as they are now), but it wasn’t sustainable success with so few strikeouts. He also allowed 14 home runs in 69.1 innings. He relies heavily on a sinker-slider combination, but he doesn’t get nearly as many ground balls as you’d expect with his low strikeouts along with the heavy sinker usage. He isn’t overpowering at all with his sinker averaging just 90-91 MPH. His changeup and curve proved to be his most effective pitches last year, which surprisingly makes him a good opponent for the Royals to face as they’ve fared well on both changeups and curves this season. He did not face the Royals last season, but I could actually see this being a good offensive game for the boys in blue.

If I got paid $1 every time I was asked what’s wrong with Danny Duffy, I’d have gone a long way to pay off my student loans. I don’t know the answer. I know his slider is getting crushed, and I know that some might believe he’s tipping his pitches, but I think it’s much more problematic that he’s leaving it down the middle far too often. Why is he doing that? I don’t know. I can’t imagine his plan is to put a breaking pitch in the middle of the plate, but what do I know? He’s accountable in his words, but until he starts to figure something out, those words will grow emptier and emptier. Fair or not, that’s the rub of being a professional athlete. Maybe he can use his past success against the Rangers (3.25 ERA in six starts spanning 36 innings) to get going. The Rangers had hit .235/.312/.422 against lefty starters, which is not especially great, but it’s better than their numbers against righties. No Ranger has had huge success against him in the past, so maybe, just maybe this is the game for him. I won’t be counting on it, but we can hope.

When the Royals signed Minor prior to the 2016 season, they did so with the hope that he could be a solid starter and the understanding that he might just be a reliever. It turned out he was good enough in that role to get a big contract from the Rangers to work as a starter and he’s had some not so great results. His control has been excellent and he’s struck out enough batters, but he’s been surprisingly hittable with nearly 10 hits allowed per nine innings. He’s also, maybe unsurprisingly, getting knocked out of games early. He’s topped 100 pitches just once and has allowed nine runs on 14 hits in his last 8.1 innings, though he does have 14 strikeouts in that time. He’s actually gotten quite a few of his strikeouts with his 92-94 MPH fastball, but opponents have hit .364 with a  .701 SLG off it, so it’s a give and take for him with that one. He’s also been dominant against the few lefties he’s faced (.200/.200/.360) while righties have raked him (.291/.353/.552), which means Jorge Soler, Whit Merrifield and Salvador Perez might have to shoulder the load in this one.

A quick glance at the numbers above and you wouldn’t think Skoglund is having a good year. And he is. But it’s still exceeding my expectations for him by a long shot. It’s hard to find too much surprise that a lineup like the one the Yankees roll out was able to get to him, but before that, he had a 3.86 ERA with 22 strikeouts and five walks in his previous 25.2 innings. The Rangers have some thump, but they aren’t anywhere near the Yankees stratosphere, so this is a good opportunity to bounce back. Four big lefties in the Rangers lineup have struggled with curves from lefties over the last few years. Choo is 3 for 22, Odor is 8 for 46, Gallo is 1 for 21 and Mazara is 8 for 39. Use it effectively and he can get the job done.

The Royals have bungled a rebuild, won a title and are now entering another one since Colon made his big league debut 21 years ago. And here is, still going strong. After a bad year last year, we all thought it might be over, but Big Sexy has done a nice job for the Rangers this year. He’s doing his typical thing where he throws basically all two-seam fastballs and not very hard and just doesn’t walk anyone. This season, hits have been hard to come by, but home runs have not. Right-handed batters have hit 10 of them in 128 plate appearances. He’s just always around the plate, so it makes the home runs make some sense. At this point, he’s really a two-times through the order pitcher, allowing a .308/.339/.654 line when he sees a lineup a third time, so even if he’s on, he won’t be in too long at least. He’s 15-11 in his career against the Royals with a 5.04 ERA and got rocked in 1.2 innings last year, allowing six runs on six hits in his only start against them. Oh yeah, and Jon Jay home run alert. He has one against Colon in his career.

Kennedy is on a run of bad starts that’s seen his ERA spike to about where it ended last year, but some peripherals are still better than last year with more strikeouts and fewer walks. He’s just been so easy to hit with nearly 11 allowed per nine innings. He’s 0-2 with a 10.91 ERA in his last three starts, which isn’t helping matters, so hopefully this is the start that turns that around for him. The road has been a problem for him. He’s posted a 3.66 ERA at home in 32 innings, but a 7.84 ERA in 20.2 innings on the road. I don’t know if there’s anything to that other than noise (probably not), but it’s interesting. He also has yet to throw a pitch in the seventh inning this year. That’ll need to change at some point.

The Rangers ace is the subject of trade rumors, and with good reason. He’s put together a really solid year with a ton of strikeouts and has limited hits really well. His home runs are a little bit up, but that’ll happen as the stuff starts to decline. After a dip last season, Hamels is getting about 33 percent more whiffs than last season, which has helped his strikeout numbers spike again this season, even in his mid-30s. He uses his cutter more than anything and mixes in a still very good changeup, four-seam fastball and sinker. Both fastballs sit around 91-92. He also throws a curve that has been outstanding this season. He’s 3-1 with a 2.86 ERA in five career starts against the Royals and dominated them last year, going 1-0 with a 0.57 ERA in two starts and allowing just seven hits in 15.2 innings. The strikeout numbers make it obvious, but he’s done a really great job of putting hitters away this season, allowing just a .130 average and .221 SLG when he’s been ahead in the count. It’s not a ton better when he’s behind, but it’s better, so, well, don’t fall behind.

Hammel is coming off his best start in a month, shutting down the Cardinals pretty well over seven innings. While he still allowed nine hits, there were some encouraging developments, including a 14.6 percent swing and miss rate with 13 whiffs after coaxing just eight in his last two starts combined. That, to me, has been the biggest issue with him this season. If you’re not getting any swings and misses, you’re in trouble. In my ongoing curiosity of his third time through the order struggles, I’ll note, he’s still been okay, allowing a .754 OPS the third time through, which is actually better than what he’s done overall. He’s 1-3 with a 4.66 ERA in eight appearances against the Rangers, including two rough ones last year, giving up six runs in just 8.2 innings over two starts.

Two bad teams doing battle with nothing on the line can make for some either fascinating baseball or boring baseball. With that in mind, I’ll give you a boring prediction and say the two teams split.

Tags: Bartolo Colon, Cole Hamels, Danny Duffy, Eric Skoglund, Ian Kennedy, Jason Hammel, Kansas City, Mike Minor, Royals |
David Lesky
Follow @dblesky
I've been a Royals fan since the day I was born, and have had the opportunity to write about the Royals for nearly a decade now. The winning was better than the losing, but the losing is kind of familiar at least.
read more from David Lesky