Jason Hammel does not care for the shift.

Jason Hammel gave up several soft hits through open spots in the shift tonight. He railed against the shift postgame. “I’ll probably get backlash tomorrow.. But I’m tired of it.”

The comments came on Tuesday night, following an outing where Hammel made his best start of the season, scattering nine hits over seven innings.

Jason Hammel on the shift: “When you abandon one side and they continue to hit through it, it’s very frustrating. I’m complete against the shift, as of today.”

The funny thing about any kind of postgame rant from Hammel about the shift in this situation, only one of the nine hits he surrendered came against a strong shift. That was on a Tyler O’Neill single in the third. If we stretch the definition of shift, Yairo Munoz collected a single in the second that was past Whit Merrifield, who was shaded up the middle in what looked to be a partial shift. Munoz also got one past Alcides Escobar in the sixth, who looked like he was maybe playing a step or two closer to the second base bag. (It’s difficult to tell from the television.)

What Hammel should have been griping about was his bad luck. Most of the hits he allowed – all nine were singles – were incredibly soft. Hammel was actually on point for the entire evening. The two-seamer was setting up the slider and tossed in a couple of change-ups and curves just for fun. The Cardinals bats were off balance all evening. His exit velocity chart tells a good story. 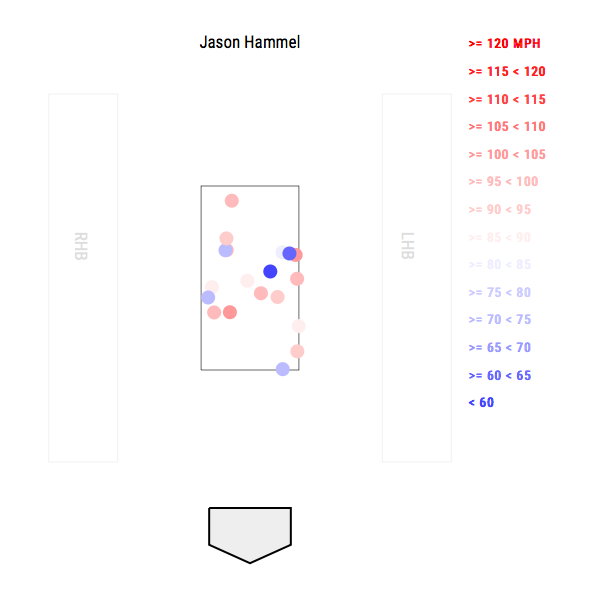 There’s a real absence of hard contact. About those base hits… Three of the four plots of light blue went for hits. Same for two of the three of the lightest red. Doinks and bleeders. Bleeders and doinks. He retired the Cardinals in order only once all night and on four occasions, had two batters on in an inning. Hammel survived because he didn’t walk anyone and because of what I mentioned before: The Cardinal batters couldn’t square up his pitches.

So really, the griping about the shift… That’s a lot of hot air in this situation.

Except he may have a point.

According to Statcast, only one other pitcher has surrendered more hits in front of the shift all season.

Of course, it’s no secret the Royals have gone from a team that shifted among the fewest times in the league, to among the leaders. They rank second only to the reigning World Champions in pitches shifted this year.

For their newfound affinity for the shift, the results haven’t really been there for the Royals. Through Tuesday, 479 balls had been put in play while the Royals had a shift on; 143 went for base hits. That’s a .299 BABIP. Compare that to their overall team .312 BABIP. We can infer the shift works for them, but it’s not a clear cut advantage when they move their infielders around.

The Astros are an interesting case study. They shift more than any team in baseball and they’re limiting their opponents to a .225 BABIP, third lowest in the league. That’s an improvement on their overall .259 BABIP against.

A key difference between the two teams is defense. The Astros defense is great. The Royals is the opposite of great. At Baseball Prospectus, Defensive Efficiency (DE) is a metric that simply calculates the times a defense converts a ball in play into an out. The Astros have a major league best .742 DE. (Another way to look at it is they’re turning 74 percent of balls put into play into outs.) The Royals, meanwhile, have a poor .691 DE. That’s tied for third worst in baseball.

At Baseball Prospectus, Russell Carleton has done extensive studies on the shift and it’s effectiveness. He found the full shift works better than the partial shift and the full shift is generally good at preventing singles. A side effect has been an uptick in walks. It’s such an uptick, that it negates the benefit the shift has in preventing singles.

The threshold for when a shift should be used should be very high. It should be practiced only on those hitters with the most extreme pull tendencies. There should probably be a few thousand shifts per year, league wide, and they should all be against the same 20 or so guys.

The Royals, it would seem, have swung the shift pendulum too far the other direction. It’s possible their over reliance on the shift is hurting them. Royals pitchers have walked 50 batters while the shift has been deployed this season. That’s 35 percent of their team total. Given where they’re shifting on just over 38 percent of all pitches, that’s probably not an extreme rate. However, where the shift really seems to hurt the Royals is once the ball is put in play. Their defense simply isn’t that good enough to convert balls in play into outs at a league average pace. Would a better defense make a difference? It would certainly help.

Now we get into the psychology of the shift. Carleton touches on this and it is important. If a pitcher doesn’t like the idea of pitching in front of a shift, should a team force it upon him? Also, it stands to reason that deviating from a normal infield alignment draws attention to the new alignment. If a batter hits one into the shift and it’s converted into an out, do we retain that information? After all, it worked as intended. But if a hitter beats the shift, goes to the third base side when three infielders are aligned to the right, you’re damn right we notice. Hammel doesn’t like the shift, so how do the Royals incorporate this going forward. Ned Yost seemed to dismiss Hammel’s comments as blowing off steam, saying all pitchers have the opportunity to veto the shift prior to their start. If Hammel truly feels victimized by the shift (even though he clearly wasn’t on Tuesday), he should probably exercise his veto power.

Veto or no, it would probably be for the best if the Royals backed off their newfound reliance on the shift. Identify the batters with the most extreme pull tendencies on the infield and work from there. The success rate will probably increase as will the pitcher’s comfort. Fewer balls in play will beat the shift and the Royals may actually walk batters at a lower rate. It can be exciting when a team embraces technology and implements a change, but sometimes it can go too far. That looks like what has happened in this case.

The Royals need to find a better balance in the shift. They have to give themselves any edge they can find.

Tags: Jason Hammel |
Craig Brown
Follow @CraigBrown_BP
Craig has been covering the Royals at various outlets for 14 years. His work has appeared at various websites, including Sports On Earth, Baseball Prospectus, ESPN, The Hardball Times, and SB Nation. Reach him at craig.brown@baseballprospectus.com.
read more from Craig Brown

2 comments on “Jason Hammel is sick of this shift”