The Oakland Athletics missed the Royals so much after their weekend stay in Kansas City that they’re inviting the boys in blue to the bay for a four-game set to hang out some more. We just learned about the A’s last weekend, so there’s nothing I can tell you here that you didn’t read six days ago other than that they’re much better offensively on the road, hitting just 22 home runs in 30 home games this year with a .222/.294/.352 line, though they make up for it by pitching much better with a 3.41 ERA and way fewer walks. It’s almost like they’re in a good park for pitching.

The only wrinkle in this four-game set that is different from last weekend is that the Royals get to see their once-prized pitching prospect, Sean Manaea, take the hill for Oakland on Sunday. I’m sure nobody will be annoying about that. 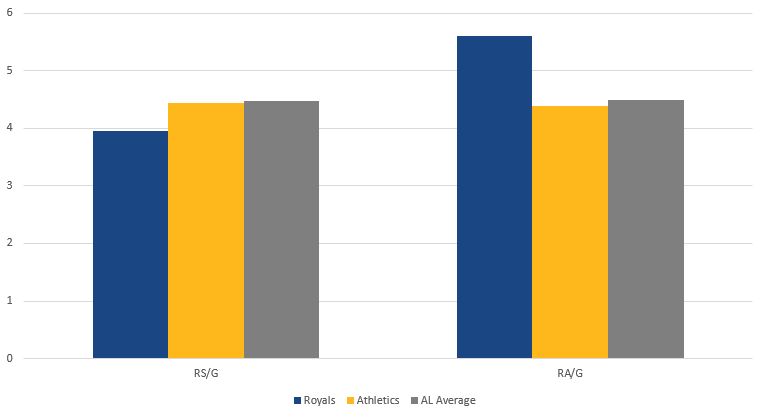 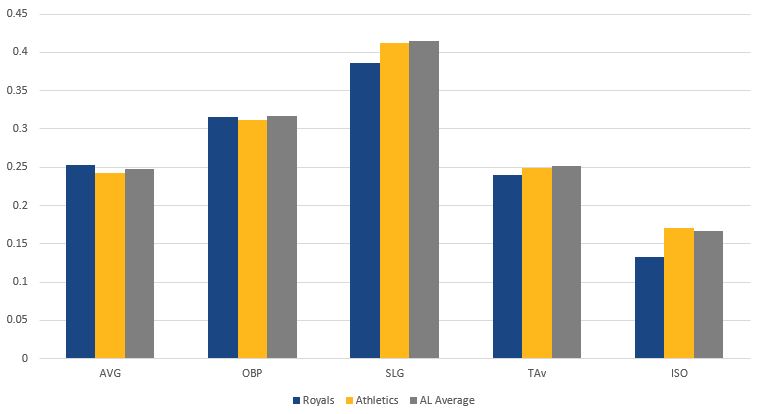 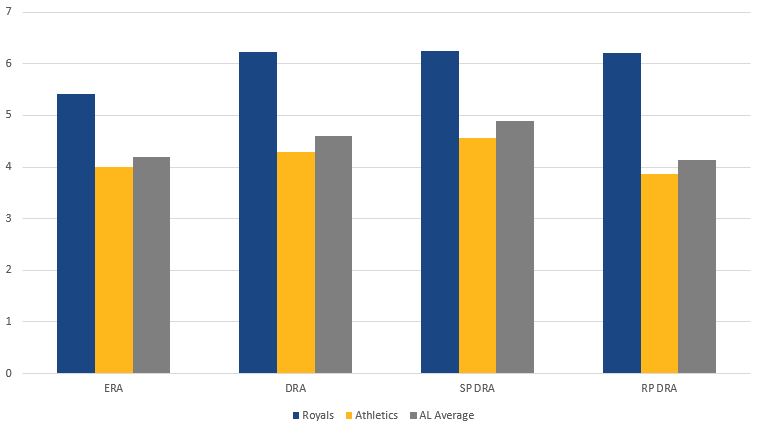 Blackburn had a solid rookie campaign last year for the A’s, but has been on the disabled list all season with a forearm strain ahead of this start. He comes into it off one rehab start in AAA that went poorly with him allowing three runs on eight hits and striking out just one in 3.2 innings. The cause for A’s optimism with Blackburn is the shiny 3.22 ERA he posted, but he struck out just 22 batters in his 58.2 innings last year. He does get ground balls, though, working heavily with a sinker as well as a slider that was responsible for a good chunk of his strikeouts last year. In his short time in the big leagues, he was much better against lefties, probably because he uses a changeup a lot more against them, and it was really good against them. He faced the Royals once and they jumped on him for four runs on eight hits in four innings with three walks to only two strikeouts. It was a different team then, but I have a hunch Jorge Soler could make some very loud contact against him.

Hammel was probably asked to do a little too much in his start against the A’s on Saturday as he gave up a home run to Bruce Maxwell as the only batter he faced in the seventh that brought the A’s a little closer to the Royals. Ultimately, that probably cost him a win after the bullpen gave up another run to allow the game to get tied up before Jorge Soler’s home run gave the Royals a lead they managed to keep. The start continued a trend of solid enough performances for Hammel as he now has a 1.96 ERA in his last three starts, but the troubling lack of whiffs came back in this one. After getting 13 swings and misses in each of his previous two starts, he had just four in this one, and when he’s not getting swings and misses, he’s often going to be in trouble.

Montas was the beneficiary of an offensive explosion by the A’s on Friday night against the Royals, and he was able to go eight innings to pick up his second win of the year. On Friday, he featured an impressive sinker that he threw 75 times with an average velocity of 96.3 and a max of 99.1. It was really good too. He threw 57 for strikes, but what was interesting is that he got 42 swings and just three swings and misses. While the pitch was excellent Friday, that’s a recipe for some potential bad luck hits against him. In fact, he only got seven swings and misses all game, so that’s a plus for the Royals heading into this one. The fact that Montas has never been especially good before and wasn’t great in the minors before his call-up tells me that some regression seems likely.

I thought Junis was outstanding against the A’s on Sunday, though he was a victim like Hammel of being left in a bit too long to cover for a struggling bullpen. Through seven, he had allowed just one run on four hits with nine strikeouts and one walk before allowing a run-scoring single and seeing one of his runners he left on score when Burch Smith served one up to Matt Olson. I know I mention swings and misses a lot, but Junis has had it working the last couple games with his slider looking as dirty as ever with a 21.4 percent whiff rate in his last two starts. His sinker was working very well for him on Sunday as well. I do have some of the same fears for Junis as I have hopes that Cahill will struggle when facing a team a second straight time, but if his slider is working, none of it will matter.

Cahill got hit around a bit in his first start against his former team, which was kind of nice to see from the Royals perspective, although there was actually a fair amount to like from his performance. He struck out six in 4.2 innings and his changeup was really difficult to square up, resulting in a 26.1 percent whiff rate. I personally don’t believe Cahill’s stuff is good enough to hold up in back to back starts against the same opponent, so I have high hopes for the Royals offense in this one after getting four runs in seven hits in the first try against him. Still, though, Cahill is having a nice season, and if he can keep up his incredible pitching at home (28 IP, 17 H, 29 K, 5 BB, 0.64 ERA), he might prove me wrong and have a nice game in this one.

Duffy, after a fantastic start and an uneven start with good results threw a clunker against the Angels on Monday night that left people likely with more questions than answers. He ended up making it through five innings, which was a minor miracle given his pitch count, but he was behind in counts, couldn’t put hitters away and just generally struggled with pretty much everything he’s struggled with all season long. The encouraging thing is that after throwing 57  pitches in the first two innings, he threw 35 in the next three before starting an inning he shouldn’t have (this is a trend) and giving up a home run to the leadoff hitter that potentially cost the team a win. He’s generally pitched well against the A’s with a  3-0 record and 3.44 ERA in 36.2 innings, so as we hoped with him facing Texas, maybe his history against the team will help him to pull out a good start in this one.

The argument for trading Manaea when the Royals did is the flag on top of the Hall of Fame. The argument against it is the state of the team today. In all, the trade worked out well for both teams. Ben Zobrist was a key contributor in a title-winning club while Manaea has turned into a dependable starter for the A’s, and has even thrown a no-hitter.

Since the start of May, though, things haven’t been as rosy for him as he has averaged just more than five innings per start with a  6.63 ERA and just 21 strikeouts in 36.2 innings with 43 hits allowed. He’s also walked 11 batters and hit six more, so he’s putting runners on base at a really high clip. His velocity on his four-seamer has dipped for the third straight year and now averages about 91-92 MPH after averaging 93+ his rookie season. It’s still incredibly effective with a .191 average against it and a .369 slugging percentage, but he’s upped his changeup usage this year. And his slider continues to be a very good pitch. It sure appears he’s in a slump right now, so the Royals ideally would take advantage of that. In his last start, he gave up just two runs over 5.1 innings, but he walked four and struck out just two while allowing two solo home runs. He faced the Royals once, during his rookie season, and went five shutout innings, allowing just three hits with five strikeouts and one walk allowed. Jorge Soler has taken him deep, and if he stays fastball heavy with him, I could see that happening again.

This is the start where I believe we’ll really find out about Keller. After throwing 75 pitches in his start against the Angels on Tuesday night, he should be up to about 90 in this one, which is enough to get him at least to a third time through the lineup. Until we see him actually pitch enough to get there, his starts are nothing more than glorified relief appearances. And don’t get me wrong, he’s been excellent in his two starts, allowing two runs on eight hits over 7.1 innings with six strikeouts and two walks. I believe he’ll need to incorporate his changeup more as he turns a lineup over multiple times, but it’s hard to not be happy with what he’s shown so far.

The Royals just don’t seem to be in an especially good place right now, though they do seem to have the right starters going (if that exists for them). I’m torn between them losing three of four and splitting, but I’ll choose the optimistic route for some reason and say they’ll split.

Tags: Brad Keller, Danny Duffy, Frankie Montas, Jakob Junis, Jason Hammel, Kansas City, Royals, Sean Manaea, Trevor Cahill |
David Lesky
Follow @dblesky
I've been a Royals fan since the day I was born, and have had the opportunity to write about the Royals for nearly a decade now. The winning was better than the losing, but the losing is kind of familiar at least.
read more from David Lesky