Next up on the list of teams benefitting from facing the Royals is the Minnesota Twins, who were expected to be a playoff contender but have been well under .500 this season. They had lost eight of nine before the Orioles came to town and they swept them and now have a chance to face the second-worst team in all the land to help them climb back in the race, even if it is a pipe dream at this point. The team was expecting Miguel Sano and Byron Buxton to take the next steps forward this year, but they’re both in the minors now. Instead, Eddie Rosario and Eduardo Escobar have been the keys in the lineup with a lot of average-ish performances from the rest of the unit. On the pitching side, the starters have been okay, as has the bullpen. This really is an okay enough team, but they likely don’t have enough to get back in the race, even with 16 games against the Royals left in the season. 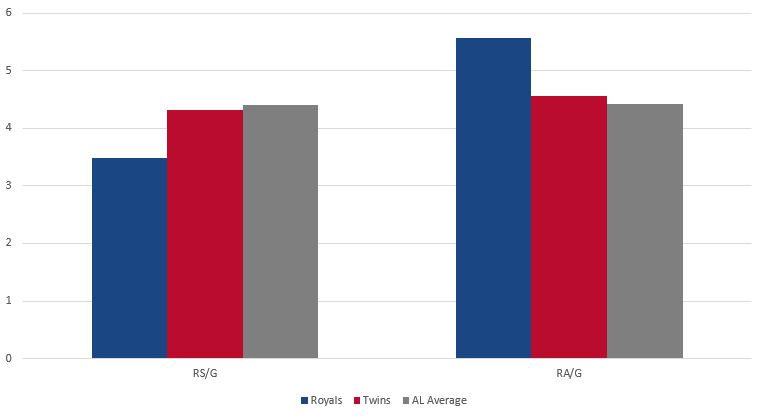 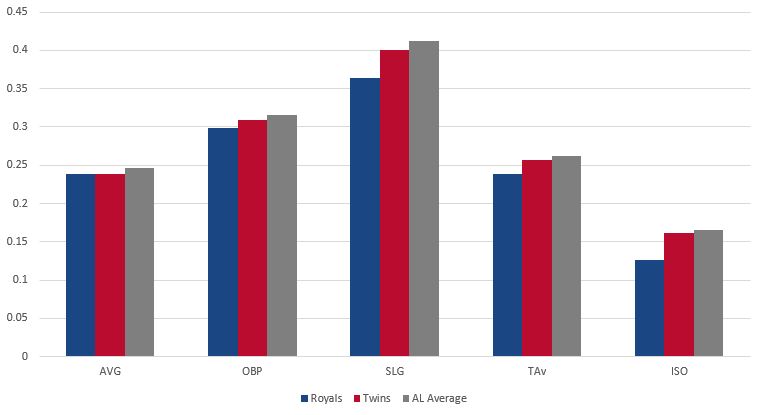 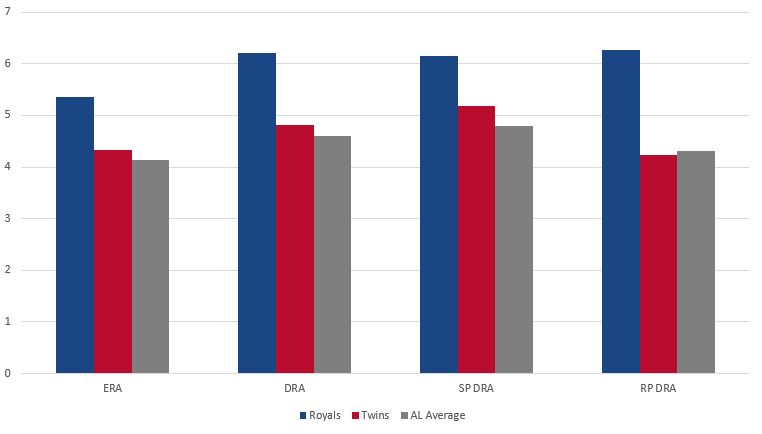 Berrios was just named to the AL All-Star team, and he’s having a really nice season to build on his breakout from a year ago. He’s striking out more hitters than last year, walking fewer and he’s been even more difficult to hit. Home runs have been a bit of a problem, and he does hit quite a few batters, so Royals hitters should watch out for that, but Berrios is very good and should pose a problem for a limp offense. The biggest issue for Berrios this season has actually been his changeup, which he doesn’t throw much. He’s given up just seven hits with it, but five of them have been for extra bases, including four home runs. A couple things I find interesting about him are that he has no discernable platoon splits, which is a good thing for him. Also, he’s fantastic at home with a 6-2 record and 2.62 ERA in 10 starts with 77 strikeouts in 65.1 innings. He has a 6.66 ERA in 25.2 career innings against the Royals with five home runs allowed. I imagine that will change in this one.

Duffy has still been pretty good over his last eight starts now, with a 3.44 ERA over 49.2 innings. His last start didn’t go well, falling apart in the sixth inning when he allowed a grand slam to Yan Gomes. The encouraging thing over his last two starts has been fewer walks with just four over his last 12 innings. If he maintains that rate, things will be okay for him in that regard. He didn’t get the swings and misses that he had in previous starts, but even so, it’s nice to see him pitching to the level the Royals have expected of him. He’s faced the Twins once this year and allowed one run over six innings, though he did walk four. He’s 5-1 with a 2.43 ERA in 18 games and 89 innings against the Twins with Robbie Grossman and Jorge Polanco hitting him quite well in 18 and 12 plate appearances respectively.

Slegers is seeing big league action for the second season, and after struggling last year, he’s been solid in his first two appearances of 2018. His first appearance of the year was actually against the Royals in the last offensive outburst this team has had, and he went 5.1 innings, allowing two runs on six hits and calming things down to give the Twins a shot to get back in the game. He’s certainly not a top of the rotation starter, but he’s put up good numbers in AAA in each of the last two seasons. If he’s going to be successful in the big leagues, it will be as a control pitcher who somehow keeps the ball in the yard. If he struggles, it’ll be because he doesn’t strike out enough hitters and no amount of control can fix that. His stuff is middling. He throws his fastball at 90-91, a slider that doesn’t move much and a decent looking changeup that has been his best pitch over his career. The sample is so small that it hardly matters, but in his career, he’s allowed eight hits in 20 at bats that end on the first pitch with three home runs. Given his solid control, getting started early in the count isn’t the worst idea.

Kennedy is scheduled to come off the DL for this start, and has been much better over his last few starts, posting a 3.19 ERA in 31 innings over his last five. He’s allowed five home runs in that time, so things aren’t all different for him, but that’s at least encouraging. Of course, the issue I’ve been worried about with him all season is that he just isn’t getting any whiffs this year, which means his once difficult to hit fastball is getting squared up way too often. It’s been a tale of two seasons for Kennedy in his matchups against the Twins with the Royals. In 2016, he was quite good with a 2.86 ERA and 27 strikeouts in 28.1 innings. Last year, he posted a 6.43 ERA in five starts spanning 21 innings and walked 14 batters. Given the way this season is going, I have to imagine that’ll be more like 2017 Kennedy vs. the Twins, but at least he’s had some relatively recent success against them.

The Lance Lynn signing hasn’t gone great for the Twins, though he’s been much better recently, going 5-3 with a 3.49 ERA in his last nine starts, and that includes a disaster start against the Cubs when he gave up seven runs in 1.2 innings. The biggest issue for him has been walks, and that’s still been a bit of a problem even on his recent run of success. Lynn relies heavily on his four-seamer and his two-seamer, throwing them a combined three-quarters of the time. The four-seamer has been a big problem with nine doubles, a triple and seven home runs allowed on it. The two-seamer hasn’t been as bad with the power numbers, but he’s allowed a .304 average. When the pitches you rely on the most have been hit like that, it’s easy to see why his numbers are subpar. Like Berrios, he’s been WAY better at home, posting a 2.53 ERA over eight starts. Unlike Berrios, the underlying numbers aren’t any better. He’s struck out fewer and walked more at home, but he’s just been more difficult to square up. I’m not sure if that’s anything sustainable or just random chance. He was the winning pitcher in the Twins victory over the Royals this year, going six innings and giving up two runs on six hits with three walks allowed.

Smith gets the chance to start after Jason Hammel finally got demoted to the bullpen. Even though Buddy Bell says that things can always get worse, I don’t think this can be any worse than Hammel’s last starts and Smith did a fantastic job in relief of Hammel the other night. He’s started before in the big leagues and pitched quite well as a starter in the minor leagues last season, posting a 2.40 ERA across three levels and was at his best in AAA. I’m skeptical he can make it work as a starter in the big leagues, but it’ll at least be nice to see some new blood. He faced the Twins twice when they visited Kansas City, and let’s just say that things didn’t go well. He allowed seven runs on five hits with three walks over three innings in those two games. I guess the idea is that this start goes better.

The Royals might win a game, but you won’t find me predicting it.

Tags: Aaron Slegers, Burch Smith, Danny Duffy, Ian Kennedy, Jose Berrios, Lance Lynn |
David Lesky
Follow @dblesky
I've been a Royals fan since the day I was born, and have had the opportunity to write about the Royals for nearly a decade now. The winning was better than the losing, but the losing is kind of familiar at least.
read more from David Lesky