During a bad season like this one, I get quite a few questions and comments asking why the Royals aren’t calling up certain players. While I generally don’t mind these questions and comments people should understand that there is a process that is involved in it. One thing many don’t have a firm grasp on is time before players are needed to be added to the 40-man roster.

One of the reasons teams don’t play willy-nilly with the roster is that some players who may not be ready for a call-up need to be protected or a team can risk losing them. As we know (Whit Merrifield, Mike Aviles) certain players develop with different timetables, meaning if a player is added to the 40 prior to their eligibility then there is a possibility of losing another player via the Rule 5 draft.

Players on a 40-man roster are given three Minor League “options.” An option allows that player to be sent to the Minor Leagues (“optioned”) without first being subjected to waivers. When a player is optioned to the Minors for a span of more than 20 days, he loses an option. – Via MLB.com

The problem with starting a players clock early is obvious, if they struggle in the major leagues (Adalberto Mondesi) then there is no stopping the clock or their options when you send them down. 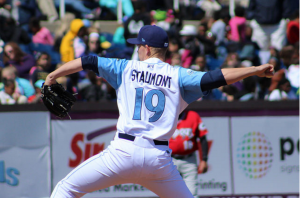 Best Bet(s) – Josh Staumont – Even with his control issues the fireballing right-hander is a good bet to get his first challenge at the major league level in September. Most any team would like a chance to see if they can fix Staumont’s control problems, considering he shows an above-average fastball and curveball. In addition to Staumont, the Royals will likely leave an Open spot on the 40-man roster. With the worst record in baseball comes the reward of a top selection in the June draft as we all know but it also comes with a top selection in the Rule 5 draft. The Royals have enjoyed decent success from the Rule 5 draft, adding Joakim Soria, Brad Keller this last season and even getting a few serviceable innings from Nate Adcock in the past. For a team lacking in talent that isn’t going to compete, this is generally a good use of a roster spot. 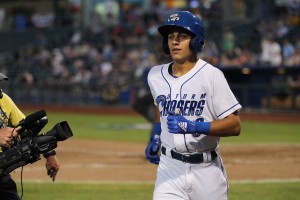 Early Birds – Nicky Lopez – The most intriguing case for call-up that isn’t ready to be protected yet is that of the current Omaha Storm Chasers shortstop and former Creighton Blue Jay. Drafted in 2016 with a fifth round pick, Lopez doesn’t need to be protected on the 40-man roster until after the 2019 season. Still, the shortstop is playing excellent defense, getting on base at a near .400 clip while hitting well over .300 at Triple-A. The likely departure of Alcides Escobar from next year’s roster, the possible Whit Merrifield trade and Lopez’s ability to play both second and short at an above-average defensive clip means this is a real discussion the front office brass needs to have. The additions of Brian Goodwin and Brett Phillips in centerfield have lessened the need for Lopez since Whit can be allowed to stick at second instead of playing in the outfield on a regular basis. Should Dayton like what he heard in July from teams in terms of a return for Whit then they could feel confident enough to move Nicky up in September to get his feet wet and see how he adjust to the major league game, leaving the option open to make a deal during the winter.

Richard Lovelady – Most know of Lovelady already for the name and the quick rise through the system last year. Like Lopez, he is a selection from the 2016 draft (10th Round) who doesn’t need to be protected until next year but is forcing the issue. GMDM has been outstanding at finding bullpen pieces since his arrival but this year’s team has struggled out there. During spring and the early part of the year, Lovelady didn’t look like a pitcher that was going to force his way onto the major league club but he’s found his footing since the start of June and has been dominant and aggressive in the zone with his mid-90’s fastball and tighter slider. In that stretch, the lefty has given up runs in just two of his fifteen appearances (1.19 ERA) while operating with a 0.82 WHIP and just under a K per inning.

It’s been standard practice for GMDM not to make players wait if they have earned their call-up with good Triple-A performance. While Lopez has performed, his is a small sample without a real spot open as opposed to Lovelady who has been in Omaha the entire season without a real player blocking him.

The Risers – Arnaldo Hernandez – In Hernandez, the Royals have a right-hander who has exhibited good control throughout his career (2.1 BB/9) and a pair of average secondary offerings, but prior to 2018 just an average fastball that worked in the low 90’s. That changed this season as the right-hander has started to work regularly in the mid 90’s during spring training and has been seen as high as 98 mph. Standing 6-0, the stuff can flatten out on plane and lessen the deeper he gets in games due to fatigue, which may force him into a bullpen role but even with that his increase in velocity, secondary offerings and control have deemed him worthy of a 40-man roster spot. Reliever Jake Newberry has been consistent the past two seasons and can be very difficult on right-handers with his fastball/slider combination. With the lack of bullpen options he’s a definite one to give a look to protect.

The Surprise – Gerson Garabito – A talented right-hander who has found his form as of late for Wilmington, I wouldn’t be shocked if he was added to protect him from being selected in the minor league Rule 5 segment. It will come down to whether or not they would want to protect him over Scott Blewett if they are debating protecting one of the two pitchers. 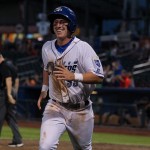 Time to Find Out – Frank Schwindel – No two players hit as well in Arizona as Ryan O’Hearn and Frank Schwindel did as both first basemen made a push to earn a spot on the roster. Of course, the Royals signed Lucas Duda and there wasn’t a spot left for Schwindel or O’Hearn while Hunter Dozier has found himself playing more first than third at the major league level. Though Dozier is in Kansas City, the Royals should give Schwindel a look after Duda is traded just to make sure they don’t have another Jose Martinez on their hands. Most fans and prospect hounds have long liked O’Hearn more, but Schwindel has outperformed him in almost every significant stat for the last two seasons and the 2017 Royals Minor League Hitter of the year is just a home run shy of finishing the fourth season of his career with 20 or more home runs. The contact ability is there, the power is there and he has walked slightly more this season even if it’s not quite where one would like it. He’s done enough to at least earn a look when comparing him with the other current Royals first baseman in-house options.

If the Royals had the candidates then they could move plenty of parts on the current roster to make room for players on the 40-man roster but I don’t see them making a bunch of additions. Clearly, Josh Staumont will be protected and I wouldn’t be shocked to see Scott Blewett (offseason) added as a big body who can hit higher velo and may be hidden in a bad teams bullpen. Alongside those two pitchers, Arnaldo Hernandez should be added by September to be given a look, as should Schwindel with his bat the past two seasons. With those moves, I wouldn’t be shocked to see the Royals lose two to three players in the Triple-A segment of the Rule 5 draft. It’s not cut and dry and decisions aren’t made in a vacuum, as you can see. When a player is added then you’re risking losing another, the Royals have historically been very good at knowing who they can afford not to protect and who they should but it takes just one mistake to miss out on a player of value that can make some question the process.