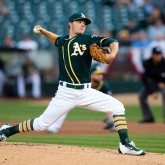 The Kansas City Royals head to the West Coast for the first time in 2016 to take on the Oakland Athletics in a three-game set over the weekend. The A’s have put together kind of a weird team in 2016 with a few important pieces from their impressive three-year run from 2012 to 2014, but […]