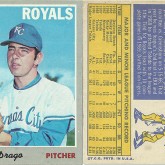 When the Royals participated in the 1968 expansion draft, their emphasis was on pitching. Five of their first seven picks were pitchers, and their starting rotation for the 1969 season came entirely from that expansion draft. As expansion teams go, it wasn’t a bad rotation; all five starters had a positive WARP and the team […]