On Tuesday night in Anaheim, Jared Weaver served Mike Moustakas an 84 mph fastball on the outer half. When bat met ball, Moustakas added a little spice, generating an exit velocity of 101 mph. The result was a blast that landed 401 feet away; Moustakas’ club-leading seventh home run on the year.

I’ve written previously about Moustakas and his premium exit velocity in the early part of the season. When we checked the numbers a couple weeks ago, his average exit velocity was above 99 mph. Since then, we’ve collected a little more data and the numbers have stabilized a bit. Through games Monday, Moustakas had put 55 measured batted balls in play with an average exit velocity of 94.4 mph. For perspective, that ranks 14th among all major league hitters. For even more perspective, league average is 89 mph. The ball is still jumping off his bat. The longer this continues, the less you can explain it away with “small sample size.” This is a very good development.

While he’s stinging the ball, the BABIP Gods have yet to get the memo. Moustakas is waiting for his batted ball luck to stabilize. His current .224 BABIP is absurdly low for the way he’s been stinging the ball. Especially when you realize his line drive rate is a tick under 22 percent. If you still want to focus on the batting average, Moustakas should be hitting more than .264. Of course, with such a low BABIP that affects his on base percentage as well. His .329 OBP is lower than it should be. The bad luck factor passes the eye test as well. Moustakas has hit some lasers right at the opposition, including one late in the game Tuesday. He’s also made some hard contact on ground balls that were cashed into outs.

The batted ball profile with the elevated line drive rate is just another notable difference in the 2016 vintage Moustakas. He’s clubbing more home runs for sure, but he’s doing it by hitting fewer fly balls. Yes, fewer. His current fly ball rate is 40.6 percent, which would be the lowest of his career. His average fly ball rate is 43.7 percent. The exit velocity numbers are cool, but no matter how you parse the speed of the ball leaving his bat, it’s a testament to how well he’s making contact that he’s hitting more line drives and a higher percentage of his fly balls are clearing the fences.

Let’s jump back to his home run against Weaver. That fastball on the outer half. 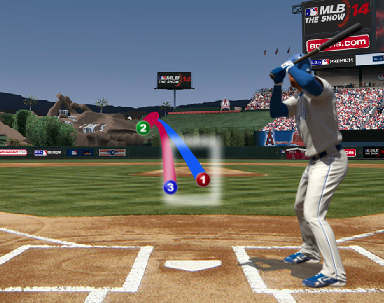 That pitch was in his happy zone as far as power production. In fact, Moustakas has done a nice job covering both sides of the plate. 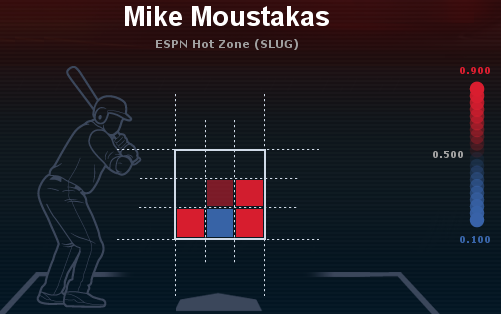 Left-handed batters love the down and in pitch. Moustakas is also providing plenty of coverage across the plate. Some of those are going down the left field line for doubles. Some, like the pitch against Weaver, he’s generating tremendous bat speed to pull the ball.

The next pair of charts better illustrates how Moustakas is covering the plate. From Baseball Savant, the charts are taken from the catcher’s perspective. The doubles are largely pitches away. Three of his home runs (now four) have come on pitches on the outer half. 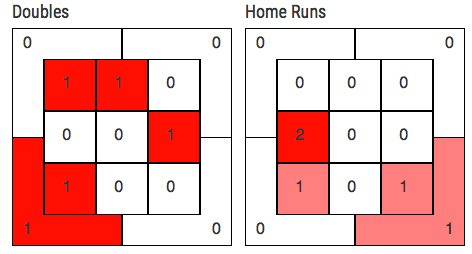 This is a batted ball profile of a hitter that is locked in the zone. Moustakas’ home run power has traditionally come from balls on the outer half, where he can reach full extension. His current power profile doesn’t vary much from what he’s done in his career. 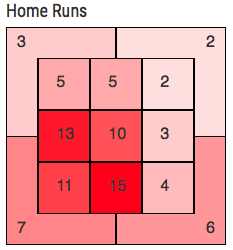 What is encouraging his what he’s done with those pitches in those locations in the small sample of less than a month. The supporting numbers are impressive. Through his first 18 games, Moustakas posted a .583 slugging percentage and a .334 TAv. He’s doing this against all types of pitches. His exit velocity against fastballs averages 94.3 mph. Against breaking pitches, it’s 95.8 mph.

Not only is Moustakas hitting for power, he’s maintained a semblance of his opposite field approach he utilized for the majority of 2015. Through Monday’s games, his spray chart for batted balls to the outfield is remarkably balanced between his opposite and pull field. 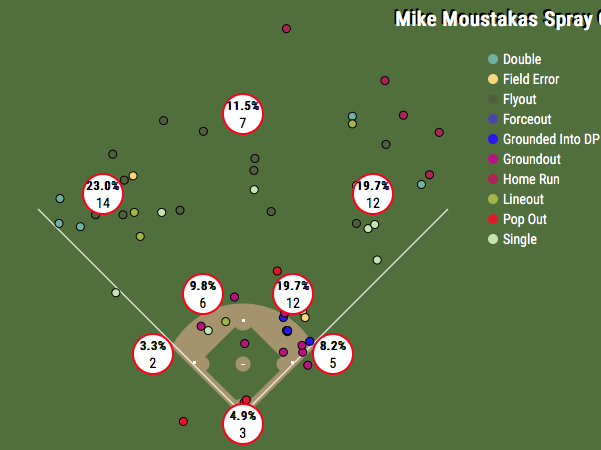 Moustakas is always going to have that cluster of ground balls around second base. He’s also going to always have a few infield pop-ups. In the early going of last season, Moustakas sacrificed some power in order to take more balls the opposite way. This year, he’s taken the best of both. He’s still going with the outside pitch to the opposite field, but there are plenty of occasions when he gets out in front, pulls the ball, and generates some serious heat.

Part of this stems from Moustakas’ approach at the plate. He’s seeing 4.2 pitches per plate appearance, the highest rate of his career. His swing rate is down. He’s offering at just 42 percent of all pitches he’s seen. It follows that he’s chasing less, going out of the strike zone on just 25 percent of pitches that would be called balls by a perfect umpire. This is a disciplined hitter we’re watching. So it shouldn’t surprise you his 86 percent contact rate is currently the best rate of his career.

Improved pitch selection and an approach to all fields means that Moustakas is finally realizing his potential as a major league hitter. Is this something that can continue? It’s easy to have been skeptical of Moustakas in the past simply because he was that pull-happy, undisciplined hitter. Last summer and his approach for most of that year changed the calculus. He was somewhat consistent in his approach and evolved as a hitter. What we’re seeing in this young season is a player in his prime continuing his evolution. It was easy to write off Old Moustakas. New Moose? Not so fast.

Maybe the more important question is, can Moustakas top Steve Balboni’s Royals single-season home run record of 36? That would be a massive jump from his previous career-high of 22, set last year. But the Moustakas evolution has turned me into a true believer. If he stays healthy, with this well-rounded approach, this is the year Balboni goes bye-bye from the Royals record book.

3 comments on “When You Throw A Moose A Cookie, He Hits It Really Far”

Last year, in a BP article on the subject, I left a comment wondering if his change to going the opposite way more often, led to a mechanical change which is helping him make more solid contact.