A huge part of the Royals’ offensive struggles this year has been the almost complete disappearance of Kendrys Morales. Coming off a .290/.362/.485 season that seemed to resurrect his career, Morales has been struggling to keep his batting average above .200 this year. His .201/.257/.345 is even worse than the .218/.274/.338 season he suffered in 2014, a year when he didn’t have the benefit of a spring training. The fact that Morales has been in the lineup every day, hitting fourth or fifth, is certainly not helping the Royals score runs.

I think a lot of people (myself included) have been patient with Morales. After all, his BABIP is .219 after a .319 last year. He’s hitting the ball hard; using the sortable Statcast data on Baseball Prospectus, we can see that his median adjusted exit velocity is 95 mph, right there with Yoenis Cespedes, just behind Eric Hosmer, and ahead of luminaries like Miguel Cabrera and Andrew McCutchen. Everything profiles as a hitter who is just suffering a lot of bad luck.

Obviously, Morales’ left-handed numbers are what are killing his productivity this year. So what gives?

Here are two charts of the pitches Morales has seen from right-handed pitchers in his major league career. The first shows the pitches from the beginning of his career through last season; the second shows what he’s seen this year. Not surprisingly, pitchers have emphasized working outside and low against Morales to neutralize his power. But this year, that emphasis has increased. Lots more outside pitchers, lots more low pitches. 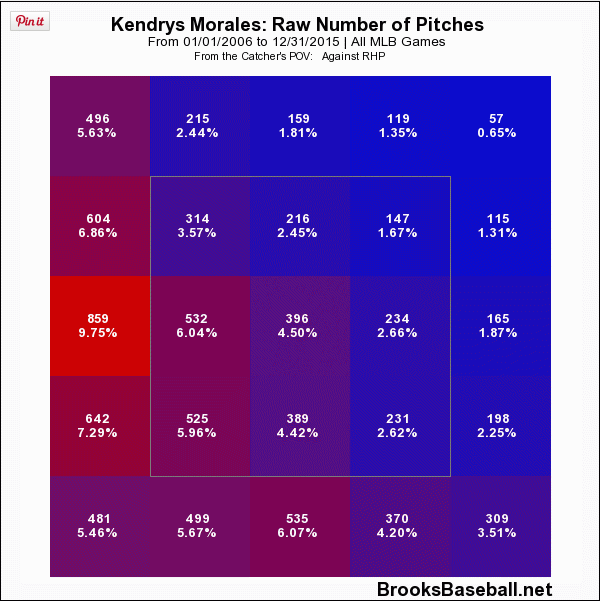 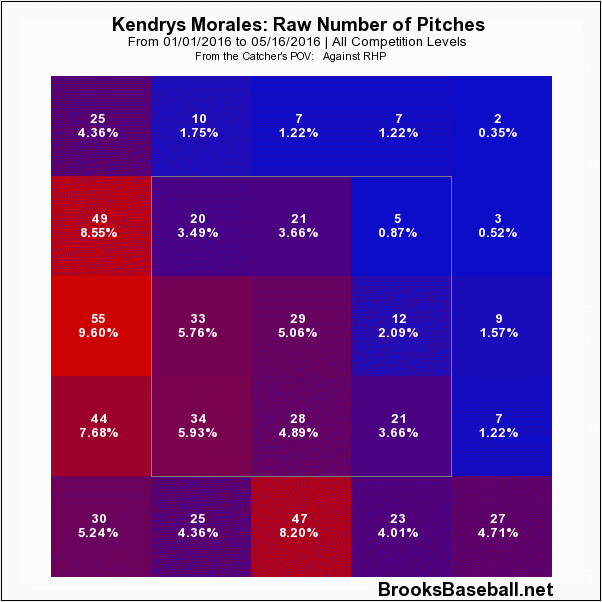 That’s part of the puzzle. But Morales has obviously seen a diet of outside and low pitches in his career. What else might have changed?

It seems Morales is swinging at more of those low pitches this year. Here are charts showing how often Morales swings at pitches in each segment. Again, the first chart is for 2006-2015, and the second is for this season. It’s not a big difference, percentage-wise, but it is apparent that Morales is going after more of those low pitches. All three segments directly under the strike zone show a higher percentage of swings this season than for his career before this season. 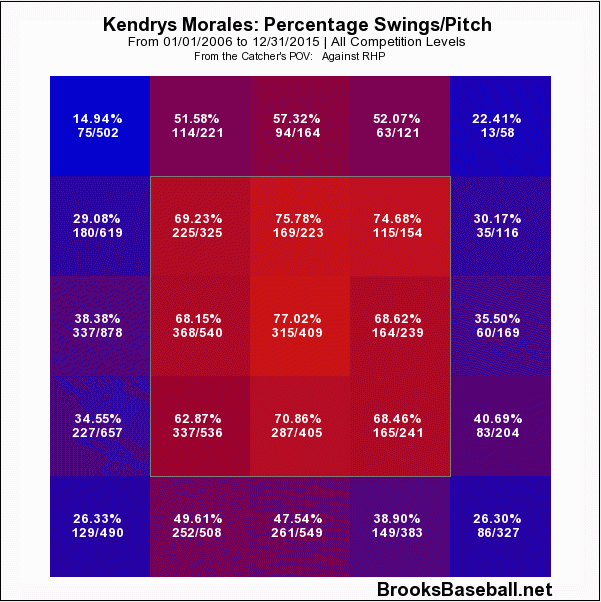 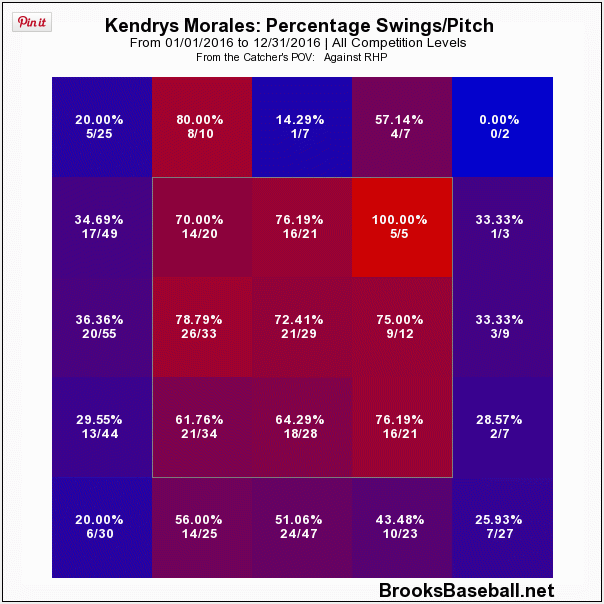 That makes sense; he’s seeing more pitches in that area, so he’s swinging at more of them. Throw in the Royals’ offensive struggles as a team and it’s not hard to imagine that Morales has felt pressure to chase pitches he might not normally swing at. When your only job is to hit the baseball and create runs, and your team is desperate for hits and runs, it would be human nature to press a bit.

The problem is, Morales is almost always facing a shift when he bats left-handed. He’s always been a pull hitter, as you might expect from a power hitter. But baseball’s increasing reliance on shifts means that, unless there is a double play situation, Morales is most likely going to see three infielders to the right of second base when he hits.

Except Morales really isn’t hitting that many more grounders compared to his career rate. But he is pulling more of them, right into that shift. Here is his spray chart against right-handed pitchers this year: 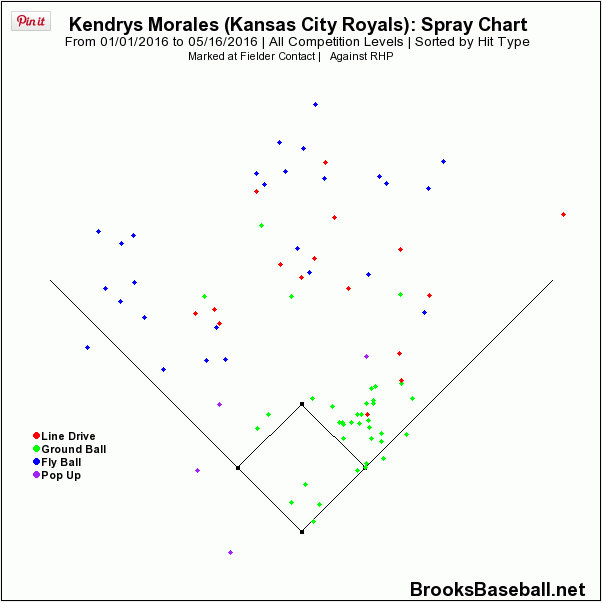 All those green dots are grounders.

And here are the outcomes: 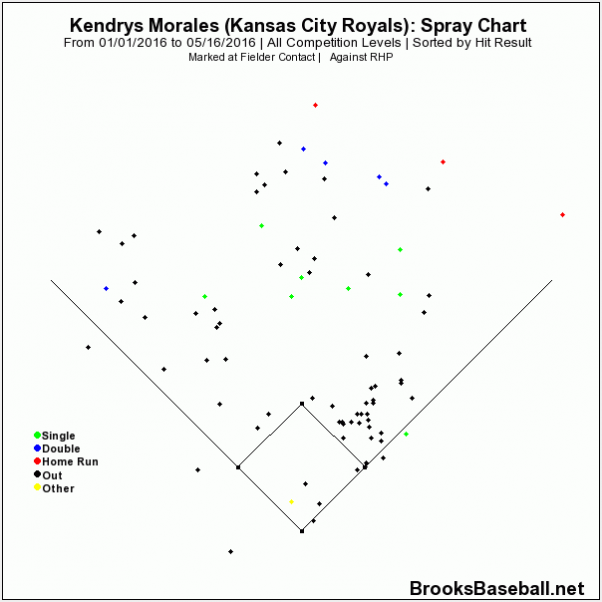 All those black dots are outs.

For comparison’s sake, here are his spray chart and outcome chart for 2015: 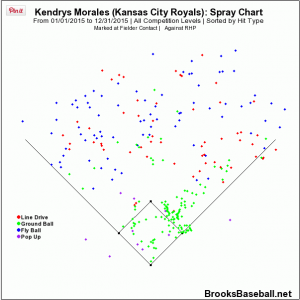 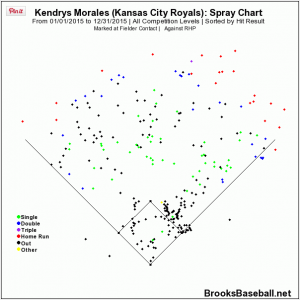 You can see that, while he still pulled the ball a lot last year, he was able to hit the ball to left field. The difference in line drives to left (especially left-center) is noticeable.

If you want some good news, I don’t believe Morales has fallen off the metaphorical cliff or forgotten how to hit. This seems fixable, whether he tries harder to lay off pitches that may be a bit below the strike zone, or attempts to drive some of those low outside pitches the other way. Yes, teams would prefer that the slow-footed Morales hit singles to left, but perhaps an attempt to wait a bit longer on the ball would result in more balls hit hard up the middle or to left-center. We can hope that his game-winning home run on Sunday, a blast to deep center field, is a sign that Morales is coming around (although that was certainly not one of the low pitches that have troubled him this year). Presumably, teams will continue to attack Morales in this fashion until he makes an adjustment to their adjustment.

Tags: Kendrys Morales |
Darin Watson
Follow @@Darin_Watson
I grew up in Topeka, and learned to love the Royals over many summer nights listening to Denny Matthews and Fred White. Of course, the Royals were easy to love back then. They got their claws in me over 30 years ago, then they went to the playoffs in 1984 and won it all in 1985. And I thought to myself, "This is easy. This team is always going to be good!" Sigh. But now that they are good again, I'll be sure not to take it for granted. I promise. I'm also a fan of the Chiefs, Jayhawks (yes, even the football team), Sporting KC, and the Nashville Predators. By day, I'm a mild-mannered project manager for a publishing company, and every night I'm lucky to come home to my amazing wife Michelle. We've been married since 2005 and live in Overland Park. Fun fact, she grew up in Memphis watching many future Royals when Kansas City's AA team was there. So it didn't take much to make a Royals fan out of her. We don't have kids, but we've got three cats (including one named after Alex Gordon), and a dog.
read more from Darin Watson

2 comments on “The Struggles Of Kendrys Morales”

His total aversion to going the opposite way would be my number one offense.

If “hitter” is in your job title, then going to left field once a month shouldn’t be asking too much.